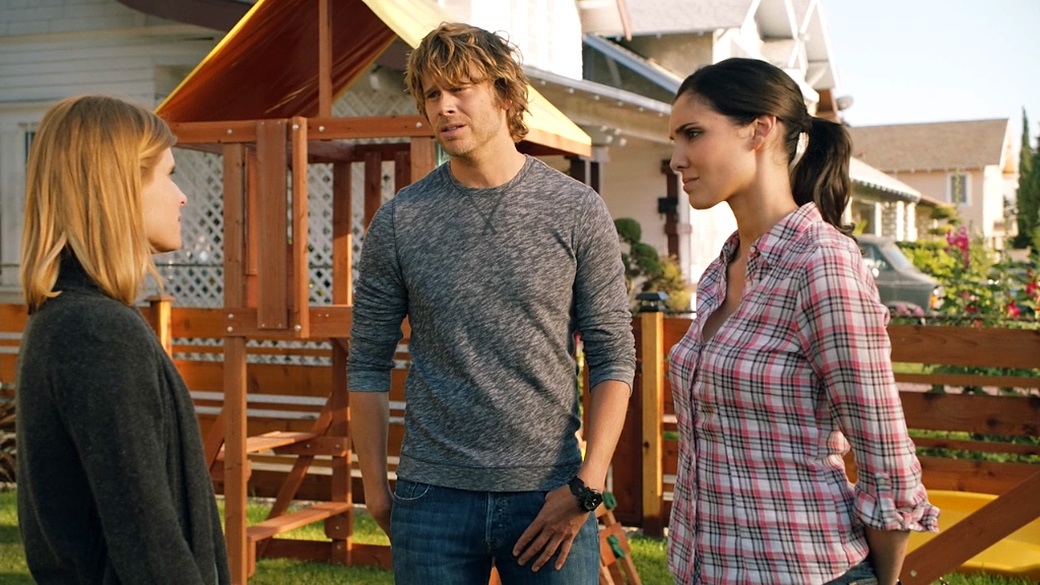 Well, here we are at the end of another long season. Although, in some ways it seems like it was only yesterday as we watched Deeks struggle with the after effects of torture while trying to find a way to communicate with a partner who has her own issues when it comes to intimate relationships. We loved to watch as the partners strived to make it through a challenging world together despite all the obstacles that were thrown in their way. It was sweet ride with many frustrating, heartwarming, infuriating, hopeful and despairing moments all rolled up into one. As a diehard Densi fan, I enjoyed going along for the ride and I was glad to see their storyline explored in much more detail than it has been in the past four seasons. Tonight, we want to see writer R. Scott Gemmill take it to the next level in the season finale. With Hetty having to answer for her role in the White Ghost investigation and DEA Agent Del Campo returning, you know before the episode even begins a storm is brewing on the horizon. Veteran director and NCIS: LA fan favorite, Larry Teng takes over the helm as season five comes to its cliffhanger ending.

Our final story this season revolves around a cartel-subsidized submarine that can smuggle billions of dollars of drugs in its cargo hold. Two years ago I wrote an NCIS: LA fanfic based on this very topic. In doing research for the piece I found that the drug cartels have been constructing these underwater vehicles as a very ingenious way of sneaking their contraband into surrounding countries. The subs can go under water to about 60 feet, and they are fast and difficult to attack because they are so hard to detect. These subs are designed to avoid detection more than outrun the law. Unfortunately, so many DEA agents have been killed trying to catch these tin cans that now our heroes are in danger too as they hunt down the cartel and their contraband.

I really enjoy how Deeks keeps coming up with new and inventive says to annoy Callen and Sam. This week he concocts a very strange looking smoothie which the guys were wise to turn down.  It seems Sam has problems with the D word.  (Deeks:  Ok, just to clarify….a clown with colitis is your worst nightmare?)  Before we can hear the sordid details, Eric shows up with a new case. An AWOL Navy officer (Hill) has been reported dead from an apparent suicide. The team is called in to investigate his death due to his top secret rating as an engineer on one of the Navy’s nuclear class subs. But Hill’s death from a cocaine overdose doesn’t really fit the man’s profile. Deeks theorizes that the officer may have been abducted for his submarine technology background and once they picked him dry of all the information they needed, he was discarded without another thought.

Eric is able to identify a gang member (Martinez) who may have witnessed the death of the officer. After Callen and Sam literally chase him through the streets of LA, they find video evidence taken by Martinez on the night in question. Once the savvy Tech Op is able to pinpoint the sound coming from a specific car engine, Eric is able to trace it back to a white supremacist (Wilson), on parole after a long jail term. The team is greeted by a barrage of bullets and grenades as they storm the man’s hideout. There not much left in the end except a few dead bodies and a dying suspect.

Hetty will finally face the music for the part she played in the White Ghost debacle. Granger tells her she is on administrative leave until further investigation and he believes the agency wants to make an example out of Hetty. The grand dame tells Granger she has no intention of going away quietly and blames him for not having her back. (Deeks:  I hate it when mom and dad fight.) I find it strange that it’s taken Kensi this long to want to talk to Hetty about Afghanistan. She doesn’t seem to be too angry about it either… just curious. So am I. If I were Kensi, I’d be a lot more than just curious!


Hetty seems to turn the reins over to a very worried Nell. Although she tries to calm the girl’s fears, she knows they are trying to do more than flex their administrative muscles. Hetty has a pretty good idea she’s in a lot of trouble. She gives the Analyst one of her brooches which hides the instructions Nell will need if times get worse. This doesn’t look good for the team.

She’s back! Deeks finds himself in an awkward situation as Agent Del Campo enters the scene. Although he has nothing to feel guilty about, he’s very uncomfortable around the agent with Kensi standing by his side. It makes for a very entertaining scene as Kensi senses that something may be up between the two, although we know for a fact it was a completely innocent partnership. Although the claws never come out, maybe someone can explain to me what all the punching is about?? It stopped being cute a while ago and I had hoped that ever since the Frozen Lake, Kensi would have found a more effective means of communication. But, it looks like we have taken a step back. Is Kensi getting frustrated as she waits for Deeks to cross his frozen lake?

You are Very Clearly, Madly in Love with Her.

So it’s not only Kensi throwing the punches! Does Deeks have a sign on his chest that says “Hit me here?” Why can’t the characters in this show communicate like normal human beings? Still, Talia does finally say out loud what we have all been waiting to hear. Yes! Deeks is madly in love with Kensi. FINALLY! Although Deeks insists that they are just brother and sister, Talia knows better and calls him on it.

As the two ‘ladies’ are trying to one up their game with Deeks, Talia explains (with Kensi’s help) that Wilson and his gang may have been working with a drug cartel. One of the bodies found in the home was the wife of a nautical engineer who was being extorted to design a submergible in lieu of his wife’s save return. The team is beginning to connect the dots. The sub was probably commissioned by the Columbian drug cartels who are responsible for bring in one third of all the drugs into the States. Another victim found in the house provides the most useful clue when it leads the team to a wet dock or ship repair shop and lo and behold… the elusive sub. (Sam: This is going on my Christmas card.)

Your Fairy Godmother isn’t going to be around to Protect You.

No, she’s not and Granger shows no sentimentality about the predicament Hetty is facing. He warns the team they are going to have to learn to get along without her. You kind of feel sorry for the tiny woman as she enters the long limousine. Is Hetty’s time as Ops Manager coming to a close? It so, it will certainly be the end of an era, not that we haven’t been forewarned. They have been preparing us for her departure all season long. The question is will we be saying goodbye to Hetty for good?

As Hetty leaves her beloved team behind, Sam and Callen appear to be in a bit of trouble themselves as they are trapped inside the sub. The cartel/terrorists have other plans and now the two NCIS agents are set adrift inside the boat with a compartment full of explosives. So we are left at the dock, standing alongside Kensi and Deeks to contemplate our heroes’ fate as the sub takes off to fulfill its ultimate mission.

I guess we have been spoiled after last season’s incredible finale because this just seemed like another storyline and not the nail biting ending that we have come to expect in the past. It was also a bit of a letdown to Densi lovers as well. I expected some fireworks in the finale… instead the whole drama in their relationship just fizzles out and flat lines. We are almost back to square one with Kensi’s signature punches and Deeks insisting they are more like brother and sister. If Deeks is frightened of a relationship with Kensi then he proves it by lying to Talia. What a difference a year makes! Maybe I am expecting more than they are prepared to deliver but we had come so far this season and to have the finale end without any of the passion and emotions of last year’s finale was a letdown. I guess we can only hope that Season 6 will take over where the middle of Season 5 left off for Kensi and Deeks.  Keep the faith Densi shippers! Deeks and Kensi deserve better!

Deeks: I guess I’m the only one who treats their body like a temple.
Sam: Yeah. Shirley Temple.
Callen: (snicker)
Deeks: That’s right laugh while you can gentlemen, because humor is the first causality of your impending vascular dementia.

It’s been a great first year for wikiDeeks!  We want to thank you for making it such a success and we all look forward to returning for a brand new season with special feature, reviews and interviews. During the long, hot summer we will keep you updated regarding all things Deeks and Eric Christian Olsen and maybe throw in a few surprises here and there. Have a great summer and come back in the fall for season six of NCIS: Los Angeles!  See you all then!