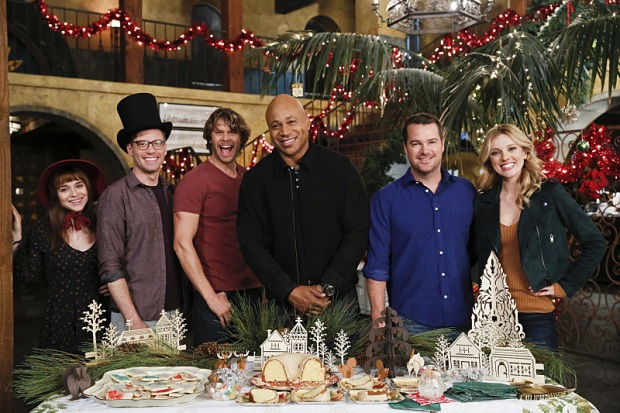 When it comes to Christmas episodes, NCIS: Los Angeles has a long track record of strong work. We’ve had nice team efforts such as “Free Ride” as well as key Densi eps like “Humbug” and “Cancel Christmas.” As much as I hate to end 2016 on a sour note, I’m afraid I have to say a Dickensian “bah, humbug” about this week’s entry. Unfortunately I found the script, written by Chad Mazero and directed by James Hanlon, generally uninvolving, with one particular sequence that was just plain wrong.

The episode was notable for its continued partner swappage, featuring the return of Anna. Sadly, she has not grown on me with repeated encounters. I didn’t particularly care for her showing up unannounced or for her dismissive attitude about the need for search warrants. And while her scene in the car with Sam was well written, it worked because LL Cool J’s Sam patiently led Anna to realize she needed to talk to her father, not because she showed any real emotion or vulnerability. We just got her usual smirk. And if I cared about Callen, I’d probably be beside myself talking about their lack of chemistry (not to mention the significant age difference). As much as I’d love to see Arkady as his father-in-law, surely Callen can do better.

Speaking of Callen, many of us have wanted more scenes with him and Deeks together, and we finally got it. Their scenes were the highlight of the episode. I very much appreciated the glimpse of Deeks’ childhood holidays, and seeing them compare notes about the reasons they wanted to have – or not have – holiday traditions in their lives was good stuff. It never felt like either one was going too deep with the sharing, but it will hopefully serve as the start of a bit more of an actual friendship between them. It was probably the most screen time they’ve ever had together in a episode.

Deeks: When I was growing up, no matter how crazy things got around the house, my mom made sure that the holidays were the one constant thing in our lives.
Callen: I can see it now, little Deeks out on the farm with a hot chocolate, looking for the perfect tree.
Deeks: Kind of. Except for the farm was the back of an ampm and instead of hot chocolate, my mom was cranking menthols.
Callen: Ah, the Norman Rockwell painting.

While we’re talking about partners in the field, was anyone as worried as I that Eric and Nell weren’t going to be able to handle the two criminals in their backseat? Thank goodness they were not the most accomplished of bad guys. But again I found Eric’s demeanor way over the top. I guess that was the plan, to intimidate the bad guys, but did they really need to wreck a car to get information out of them?

We did see a number of gifts exchanged throughout the episode. Nell and Eric had been busy! Nell’s conversation with Kensi was particularly well done, although it’s unclear whether her words about Kensi being a heroine quite sunk in. Eric/Hetty’s gift to Kensi was spectacular, and took me right back to the make-up brush Hetty gave her in “Imposters.” And Eric’s sincere words to Kensi were very sweet and indicative of his ongoing support for her through the entire season. I’m not sure Kensi knew what to make of either conversation, but hopefully it all made her feel missed and loved.

Finally (if we’re not counting baked goods), we got Nell’s clock for Eric. Not a terrible gift, and I’m glad it made Eric feel better, but the metaphor felt like a bit of a stretch. On the other hand, Eric’s insecurities seemed genuine and their scenes together were fine. I think I’m probably just bitter that they came at the expense of any scenes for Deeks and Kensi…

I understand that Deeks and Kensi can’t always provide the “emotional center” of the show, but after a series of Christmas episodes where they at least got a significant scene or two together, I have to say I expected more. And if I’m being honest, I have to say I was expecting much more. As in, maybe even a proposal more. Sure, Deeks’ hug and excitement to see Kensi were totally adorable, as was Kensi’s seeming to actually need the reassurance his hug provided. And the very public nature of the display made it all the sweeter. But after such a strong start to Season 8, I thought the Densi aspect of this Christmas episode would be up to the level of those from recent years, and it wasn’t even close.

And A Fantasy Sequence in Kensi’s Head

Wow, what do we make of that Kensi “dream sequence” at the end? And since she was awake, that’s probably not even the right term to use to describe it. After successfully avoiding all spoilers, I had no idea this was coming. While usually I like being surprised, in this instance I was kind of appalled. I guess I should be thankful they didn’t have Kensi, Anna and Nell mud wrestle in bikinis while the guys all watched. It was an unpleasant reminder of the Talia-Kensi throwdown in “Deep Trouble, Pt. II” that felt completely unrealistic and unprofessional. At least here it wasn’t real.

Kensi is a physical person who has been known to express her feelings through violence (see Talia, see The Punch), so her fantasizing about taking on Anna for trying to replace her seemed totally plausible. I get that she’s anxious to be back and insecure about her future. But to choose to express that through this ridiculous sequence rather than to have her try to express herself with words does a disservice to Kensi and to us as viewers. Kensi has been through so much, and we’ve barely seen her get a chance to talk about how her life and her mindset have been impacted. It’s a shame they didn’t use this opportunity to do a little more for her character.

On top of that is the fact that the show has never introduced such moments of fantasy before, at least as far as I remember. I understand that scenes like these could be regular elements of a TV program, in which case I’d be totally open to seeing them. There must be lots of current examples, although the only one I can think of is the very old Ally McBeal. But NCIS:LA has never spent any time showing us the inside of any of these characters’ heads in this way before, so it was disconcerting to have this random moment included. Next thing you know, will we get an all-musical episode? I don’t see either as part of the show’s DNA.

What all these elements – the partner swaps, the Neric-centric storyline, the Kensi fantasy sequence – produced was a show that felt way out of balance. It made me appreciate the finely tuned set of four partnerships the show has developed over the years. When three of the four are out of whack, the whole show feels off. Add into that a type of scene we’ve never seen before and my head was left spinning.

Well I sure am sorry that after waiting so long for a new episode, we didn’t get a better one to take us into the new year. Regardless, I hope your new year is filled with wonderful things, including a Densi proposal and a “Deeks, M” episode!

In the meantime, what did you think of “Tidings We Bring”? Was I too hard on it? Did you love Callen and Deeks together? What did you make of that fantasy sequence? Tell us your thoughts in the Comments!