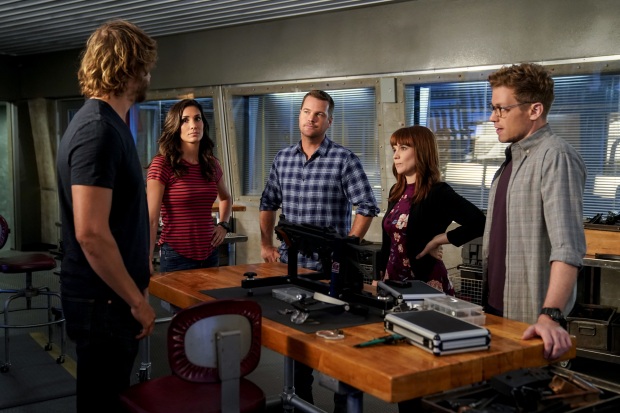 After an eventful end to Season 8, I tuned into the NCIS: Los Angeles season 9 premiere, “Party Crashers,” looking for clues about where Season 9 might take us. What would the ramifications be from Michelle Hanna’s death, Granger’s departure, and Densi’s engagement? Written by showrunner R. Scott Gemmill and directed by John P. Kousakis, the episode didn’t reveal too much, but somehow made me think that the more things change, the more they are likely to stay the same.

Even if we hadn’t read the spoilers, would anyone have been the least bit surprised at Hetty’s retirement? I wonder if she turned in the same letter she had used on multiple past occasions (I’ve lost count!). As much as the team will likely miss her, it will be interesting to see how her storyline, set in a distant land away from the team, plays out. On the face of it, a Hetty resignation/retirement is nothing new, but this time it had a slightly fresher feel because it seems to mark the start of a new story, rather than coming as a reaction to on-going events like the Comescu’s feud or Janvier killing two agents. But if her new mission becomes more mystical – if anyone starts talking about tribes rather than mere ghosts – count me out.

Miguel Ferrer’s tragic death and Hetty’s new storyline have created a huge gap at the top of the OSP leadership. Thankfully Nell wasn’t promoted, as I think she could use another decade or two of experience first, but the jury’s out on Granger’s replacement Shay Mosley, played by Nia Long. While it’s no doubt impossible to replace Ferrer with an actor of equal gravitas, I’m not sure Long convinced me of her character’s “Executive Assistant Director” status.

Mosley’s apparent unwillingness to assess the team in person, or listen to any of their input, before making judgments was frustrating. Of course, it’s merely a set-up for conflict, which the showrunners seem to feel is needed between the team and their superiors. What’s really a shame is that she’s also completely lacking in warmth or a sense of humor. But then again, that’s also what I thought about Granger for his first several seasons before his sardonic wit started shining through. Eventually I decided he was the funniest character of all. Maybe Mosley will loosen up with time?

It felt almost surreal to hear her complain about the team’s frequent use of “lethal force.” It’s always been part of the show’s very formula, so she has her hands full trying to change the team. It seems much more likely that being in L.A. with its “more dangerous criminals” will change her instead.

Her assistant Special Agent Harley Hidoko, played by Andrea Bordeaux, was much more likable. Her inability to get her tablet to sync with the big board made me laugh, as did her dry observations about all the things Mosley disliked. In the end, while she hasn’t yet sold me as being authoritative enough to be a Special Agent, I did find her kind of adorable.

As for Mosley breaking up Densi? As Deeks would say, it seemed a bit excessive. She clearly has her mind set on how things should be done, and LAPD liaisons don’t seem to be part of her plans. How refreshing was it that Callen fought for Deeks to stay, and plans to continue to do so? It did stress me out a little to hear that she’s looking for a Deeks replacement, but I’m hoping it will lead to a juicy Deeks-centric storyline so I’m willing to live with the ambiguity.

The biggest question heading into the premiere was how Sam was coping with Michelle’s death. I assume we’ll be exploring this life-changing event more in the future, because we sure didn’t get much here. The conversation at the trailer where Callen tried to convince Sam to come back to work felt forced- it just didn’t ring as true as I would have expected from Gemmill. For example, asking if Sam was holding out for more money or a private office, while it must have been Callen’s way of poking his friend, felt a little impersonal. Sam’s motivation to return, that he couldn’t live with himself if anything happened to his team, did ring true, reminding me of the many veterans who re-enlist because they want to get back to their unit.

Either way, Sam’s absence felt like it was resolved a bit too quickly. The team is torn apart within the first 12 minutes but is reunited before the final act? It felt a bit more contrived than had either character’s absence lasted into a subsequent episode or two. It remains to be seen how much they revisit Sam’s emotional well-being in future episodes, but if it’s not addressed in a major way, it will make Michelle’s death an even bigger waste.

As unnecessary as Deeks going back to LAPD seemed to be, it did result in some delightful silliness. Patrick St. Esprit was back as Lieutenant Bates, who’s moved to a new office (one that’s likely on the Paramount lot rather than on location) since the days of “The Debt.” Eric Christian Olsen seemed to be having so much fun playing off of St. Esprit. It made me think of my long dreamed of spin-off. I used to think it involved Deeks becoming a private investigator. Now I realize he simply needs to be permanently reassigned to LAPD so he can banter with his boss like this in every episode. I wonder exactly how much of their dialog was improv?

Bates: Do you know what I hate about lawyers, Deeks?
Deeks: Hmm?
Bates: Everything. How are you settling into your new desk?
Deeks: About that… I thought we were ah, I thought we were friends.
Bates: Deeks, friends are just people who haven’t figured out what they want from you yet. So, what do you want? And don’t say ‘a different desk’ because that’s the best I could do on short notice…
Deeks: I’m gonna go to the crime scene and then check on my mom.
Bates: You forget the lunch she packed you?
Deeks: No, I just, I haven’t heard back from her in a couple of days. I’m gonna check in on her.
Bates: Really?
Deeks: Yeah, I’m gonna make sure she’s OK.
Bates: No, I mean why are you telling me this? You’re a grown man Deeks, I mean what do I care if you go see your mother. Do you need me to write you a note or something?
Deeks: I’m used to working on a team, and therefore I thought I was being considerate in case anyone here needed me.

Awww, Deeks is no longer the lone undercover operator he was back in Season 1. That seemed like a revealing line. It makes me wonder whether this is the season where he finally becomes an agent (and we finally get a “Deeks, M.” epiosde!). Between Mosley and the IA investigation, it sure seems like events are aligning to push him in that direction.

It turns out St. Esprit isn’t the only guest actor who can hold their own with ECO. Pamela Reed, playing his mom Roberta was delightful as well, laying into Deeks for failing to share the good news about his engagement. I loved how she controlled Deeks (and the whole scene), never letting him get the last word about anything. She has a welcome place in my spin-off! In fact, I think I just might ship Roberta and Bates. They seem like they’d get along well, their respective high levels of sassiness would result in high level banter, and their being together would freak Deeks out completely. Yep, let’s make that part of the spin-off- Bates as boss and father-in-law! What a great sitcom they would all make.

Roberta: What’s the matter with you?
Deeks: What’s the matter with me? What’s the matter with you? I’ve called you every day for like the past five days.
Roberta: No you haven’t.
Deeks: No, I haven’t. But I called you five times today.
Roberta: I was busy.
Deeks: Yeah. That’s obvious that you were, you were busy. Ohhh, OK. You know what Mom, I was worried about you, OK? I was worried about you.
Roberta: Well then you should have called me several weeks ago. And then you coulda told me about your engagement.
Deeks: So Kensi’s mom called you.
Roberta: Of course she called. She was ecstatic. I on the other hand was surprised and embarrassed since I didn’t know a damn thing about it.
Deeks: Listen Mom, I’m sorry. I just didn’t-
Roberta: Ah, save it. You don’t want me to get involved? I get it.
Deeks: No, that’s not what it is.
Roberta: Yeah, that is what it is. But you know what? I don’t care.
Deeks: Don’t say that, ‘cause you do care.
Roberta: No. I’ve got a wedding of my own to plan.
Deeks: What?
Roberta: It’s high time you finally had a new father.
Deeks: Oh my god, Mom!
Roberta: Relax Martin, I’m just kidding you. Don’t get your knickers in a twist. We’re just friends…
Deeks: OK, that’s fine.
Roberta: …With benefits.
Deeks: Stop talking.
Roberta: If you know what I mean.
Deeks: Mom-
Roberta: The sex.
Deeks: Mom!

Again, ECO seemed to be having a lot of fun with this guest star. Now this is the kind of winning dialog no one writes better than R. Scott Gemmill.

The lone Densi scene on the beach was well done, although I have to say I was a bit distracted by how long they were running, wondering how many times they had to shoot the scene and how winded they would be by the time it ended. Still, the Densi banter was just what we’ve come to enjoy.

Kensi: When was the last time you talked to your mom?
Deeks: I don’t know, why? What?
Kensi: You haven’t told her yet, have you?
Deeks: Trust me you do not want me to tell her because once I tell her, she’s gonna be all over this.
Kensi: Deeks, you are putting me in an awful position, OK? She deserves to know. You have to tell her.
Deeks: I will!
Kensi: When?
Deeks: Right after the honeymoon.

Come back later this week for the return of Deeks’ Surf Log and Kensi’s Journal, as well as the Drabble of the Week. And tell us what you thought of “Party Crashers” in the Comments below. Did it meet your expectations? I can’t wait to hear your opinions!