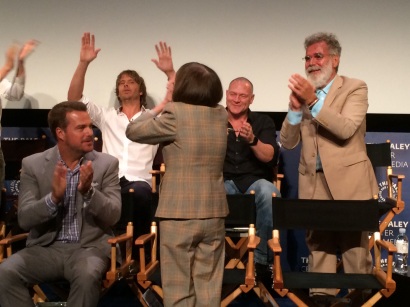 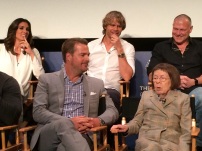 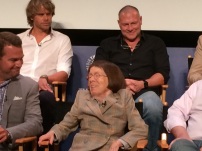 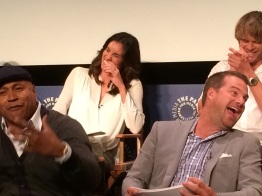 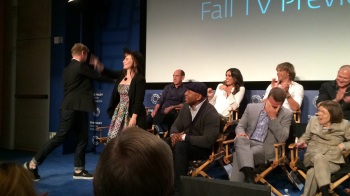 Friday night I was lucky enough to represent wikiDeeks at the Paley Center for Media’s Paleyfest Fall TV Preview of NCIS: Los Angeles. PaleyFest is a two week festival where new and returning television shows are previewed, with each airing followed by a panel discussion and Q&A with the show’s cast and creative team.

The Los Angeles Paley Center theater is tiny, holding 150 people, so it was a wonderfully intimate setting. I arrived early and scored a second row seat, right at eye level and only a few steps away from the cast seats. Sometimes there are huge benefits to being the only wikiDeeks staff member who lives in L.A.!

The event started with a request that the audience avoid sharing spoilers on the Season 7 premiere, so I shall do just that. I will say that I thought it a very strong episode, filled with lots of things I’ve been hoping to see from this show. There are many character-driven moments, with relatively little action, and I wouldn’t change the ratio at all. Of course, there are a few interesting developments I know we will all enjoy discussing and debating, but overall it’s a promising way to start the season.

Of course, the entire episode may play differently when watched at home on TV. There was something wonderful about watching the show on a movie screen, where every dramatic moment and every close-up felt, well, cinematic. It made me appreciate even more the wonderful direction, cinematography, and set design, which really did make me feel like I was watching a movie. And to share the jokes (there were many) with a theater full of other laughing people made it so much more fun. I kind of wish I could watch every episode in this kind of environment. I hope the cast was backstage early enough to hear the audience reactions, something I’m sure they would have enjoyed, seeing as usually the only audience feedback they experience is through social media.

Then it was on to the cast panel, moderated by Entertainment Tonight’s Kevin Frazier. His questions definitely kept the discussion on the light side. What an animated group of people! Well, except for Miguel Ferrer and John Peter Kousakis, who both seemed a little uncomfortable in the spotlight. Barrett Foa and Renée Felice Smith showed off (ever so briefly) their dance moves. Eric Christian Olsen and Chris O’Donnell did their impressions of LL Cool J. Barrett demonstrated the little bounce step he uses when he walks away in a scene, and talked about his “5,6,7,8” mantra when he resets himself during filming. Daniela joked about having her next baby with Chris, and working her way through the cast. Even R. Scott Gemmill got in on the humor, telling Eric, “Even the Eskimos have 50 words for your hair.” Renee told a great story about solving a real life crime, leading to the tagline, “I Nell Jones’d that shit.” It’s truly a wonder that they ever get a single episode completed amidst such hilarity. If you haven’t watched it, go there now- there’s so much more, and it will be worth your time.

During the audience Q & A, I was able to ask Shane Brennan when we would get a “Deeks, M” backstory episode. I had debated whether to ask this or to ask something else directly of Eric, given Shane’s penchant for, shall we say, being creative with the facts when it comes to teasers. But when early on in the panel discussion, R. Scott Gemmill mentioned that there would be a “Granger, O.” episode later this year, I just had to ask. Interestingly, many in the cast (including Eric) didn’t seem to be aware that this episode naming convention was a pattern on the show. Shane said that, “Deeks, M. will be next season, Season 8… Next season is… a big Deeks season, there’s a lot happening for Deeks and Kensi next season… Internal Affairs is nothing compared to next season.” This was news to everyone, including Eric and Daniela. Now, do I believe it? Hard to say. Shane seemed to be making up his answer on the spot when someone asked if they would ever offer a walk-on role for an audience member, so he might have been doing the same thing here. At least we have a pretty clear promise that we can criticize later if it’s not kept.

No Time for Selfies

After a few more audience questions, they ended the session, and the crowd descended on the stage to try to get autographs and selfies with the cast. Most cast members disappeared very quickly, after only a minute or two. Chris O’Donnell stayed for a bit. Eric stayed by far the longest. I think he would have stayed until everyone got their selfie, but the security staff were anxious to get him off stage. Yours truly may have snagged some autographs for some new prizes for upcoming Pets of the Homeless charity drawings, so get your credit card ready!

It really was a lovely evening. What I enjoyed the most was seeing the genuine affection the entire cast and producers seem to have for one another. They are clearly a tight-knit bunch, despite the diversity of their ages and backgrounds. There was an actual sense of joy there that came through in the fun they were having together, and it made me appreciate them and the show all the more. 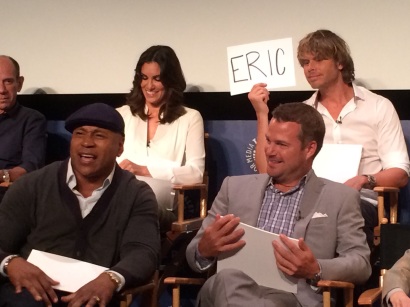 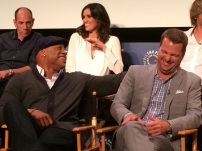 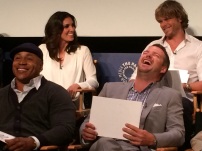 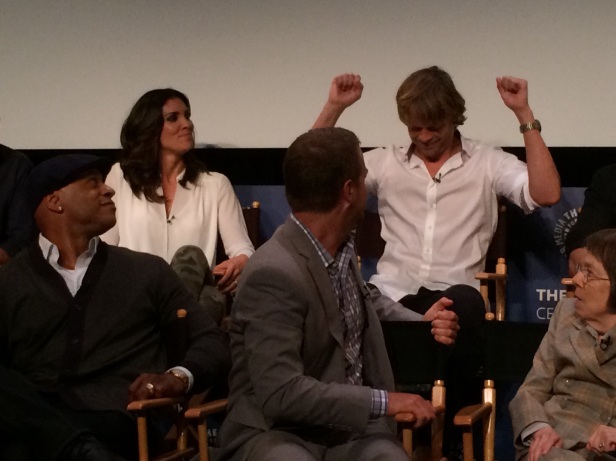 All photos by Karen P./wikiDeeks. Please give credit.