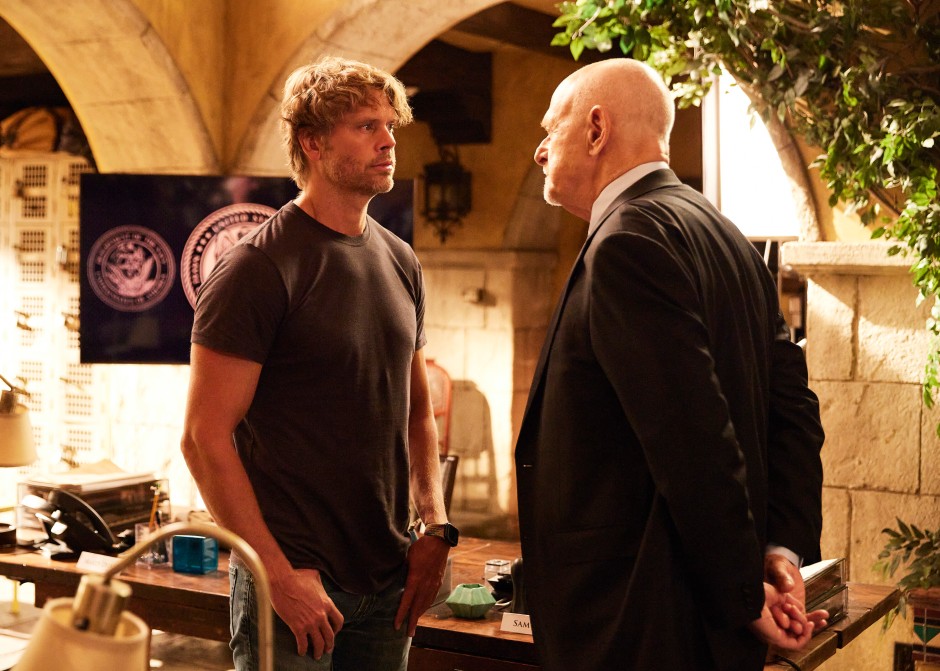 There may be little sign of a backstory-heavy “Deeks, M.” episode so far this season, but we have been gifted with some really great Deeks scenes offering insight into how his father impacted him and his mom, and how his own chance at fatherhood is impacting him today. This week’s NCIS: Los Angeles episode, “Survival of the Fittest,” written by Andrew Bartels and directed by Eric Pot, gave us two wonderful Domestic Deeks scenes, and an episode that revolved around the emotional well-being of our favorite investigator.

I don’t think I can ask more than for Deeks to be at the emotional center of any given episode, and this episode certainly placed him there. Although we’ve been a bit lacking in Densi this season, part of the reason this episode could focus so exclusively on Deeks was because Kensi (and Daniela Ruah) was away, and I enjoyed seeing Deeks’ needs highlighted.

We started with an apron-clad Deeks “killin’ it,” happily making breakfast and lunch for Rosa. One of the best lines from the episode was Deeks referring to himself as “Dad” (“Dad’s out here killin’ it”). It’s a one-word indication that he’s gotten everything he ever wanted. And that he is in fact killing it, savoring the everyday routine that includes a sit-down breakfast with his daughter.

When it turned out Rosa (played by Natalia del Riego) was in no shape to enjoy breakfast, Deeks leapt into action, offering a rambling menu of potential remedies. Poor Rosa just wanted her mom’s soup and comfort, and Deeks responded from the heart, with compassion and love, telling her he was sorry her mom wasn’t there, and that he wished he’d met her. Then he told her he loved her and laid that sweet kiss on her forehead. The clear affection between them communicated how close they’ve become in a relatively short time. This opening sequence showed us that Deeks is exactly the father he always wanted to be, but doubted that he could become (not that we ever doubted it). 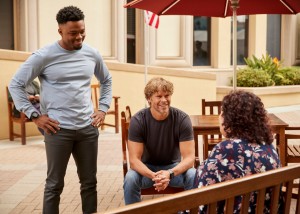 Deeks clearly hated to leave Rosa, especially knowing she’d be subjected to Roberta’s shenanigans, but he had a job to do. His day didn’t noticeably improve when he left home, as he became subject to Kilbride’s wrath on his arrival at OSP, was reminded by the victim’s mother of how much worse his worry over Rosa could become if she were more seriously ill, and had to man the computers in Ops, where he felt like a fish out of water.

Thankfully, Roberta (played by Pamela Reed) had tired herself out and was in more of a mood to listen as Deeks got home and told her about his crappy day. We’ve seen Deeks regularly fret and worry over all assortment of things, and Kensi regularly tries to comfort him. Yet there was something different about the way he just unloaded all his worries on his mom. I think it’s because with Kensi, he worries more about her than himself, so is reluctant to be completely transparent about his concerns because he doesn’t want to burden her. It’s why this episode would have played out so differently if Kensi had been there.

This certainly wasn’t the first time a conversation like this has played out between Deeks and his mom. It conjured images of similar conversations they must have had when Deeks was a child and an adolescent. The history between them felt almost tangible in that moment. And Roberta providing just the comfort Deeks needed was a beautiful way to end the episode. The repetition of the forehead kiss, the “I love you’s,” her running her fingers through his hair. Seeing how well it all worked to actually make Deeks feel better brought a tear to my eye. This is a man who’s dealt with so much trauma in his life, and dealt with a lot of that trauma on his own. Seeing that he has the support of a family around him now makes me very happy for him.

OK, I did say I couldn’t ask for more than Deeks being the episode’s emotional center, but, well, maybe I can ask for a little more? You all know that I always want Deeks to be portrayed as competent, and for all the characters to be, you know, in character. Let’s talk about how these things played out in the episode.

We can start with Kilbride. If you’re just describing him in broad strokes, you could say that he’s consistently been characterized as grumpy, patriotic, and regretful over how he prioritized his job over his family. In some ways he’s been one of the most consistently drawn characters on the show.

But it’s that grumpiness I’m going to quibble with. Sometimes Kilbride is like a grumpy grandfather who’s really quite fond of his grandkids. Other times he’s like the angriest person we’ve ever met, whose blood pressure must be through the roof due to the amount of hatred he carries in his heart. I think part of the vacillation I see with his character is based on how much any given writer feels the need to introduce conflict within the NCIS group, as opposed to letting them function like a smoothly running team whose conflict only lies with the bad guys. He’s a convenient foil. 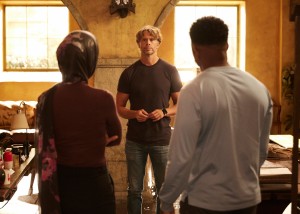 This week, it felt like Bartels wanted to make Deeks’ whole day pretty bad. Since this set up the beautiful scene of comfort at the end, I have no complaints about this arc (you know I love the angst). But I do think that these agents and investigator have to always wonder which version of Kilbride they’re going to encounter on any given day. It can’t inspire trust, or reduce their stress. And it makes me as a viewer just a little confused over exactly what to think of this man. Should I feel fondness for his curmudgeonly qualities? Or should I actively dislike him for being so genuinely mean?

In this case, obviously he jumped on Deeks without bothering to find out the cause of his lateness, prompting his non-apology apology at the end of the episode. His reaction over what time someone starts work, out of everything he could be angry about, seemed even more confusing given the entire season’s comings and goings of team members who show up at random times because of the show’s welcome new focus on the characters’ personal lives, and the need to account for missing cast members. Didn’t Kensi recently just change her mind entirely about working for a day when she got to the mission and then turned around to drive home and greet Roberta? Before Kilbride lights into another person for being late, I’d suggest he set some clearer ground rules around his expectations.

Kilbride’s hostility brought back unwelcome memories of how disdainfully Mosley treated Deeks at times. But she only sent him back to LAPD, she never made him man the computers all by himself in Ops. (Thank goodness for Janice!) Here’s where the question of competence comes in. Of course Deeks is “not built for Ops,” so he struggled to handle the job requirements there. I couldn’t tell if we were supposed to find his struggles amusing. He seemed so miserable that I only felt bad for him. Hopefully that’s what Bartels intended, because putting Deeks in a position to fail and then mocking him for it would not be a welcome development.

One reason this move felt potentially mean-spirited is how Rountree has been able to take care of all the Ops requirements without any apparent background in information technology or intelligence analysis. Of course, this is the result of sending Beale and Nell away and replacing them with random field agents, but it made Deeks’ struggles feel a little unfair (not to mention minimizing the skill of those original teammates). On the other hand, if Deeks had come in and smoothly run the place, it would have truly been out of character, so in the end I’m OK with the scenes themselves.

It did make Kilbride’s decision to send Deeks there feel lacking in judment, potentially putting the team in harm’s way or making it more difficult for them to catch the bad guys. Kilbride seemed to prioritize punishing Deeks over accomplishing the mission, despite the pressure he was getting from the higher ups.

At least he kind of apologized for his tantrum. While I found the framing of the conversation between the lines of the metal screen distracting, I could watch Gerald McCraney and Eric Christian Olsen talk to each other like that all day. We didn’t really learn anything new about Kilbride, but at least he had the good grace to acknowledge his bad behavior. Watching Deeks listen to him talk reminded me of everything ECO has shared about the importance of listening in acting. He was absolutely glued to Kilbride’s every word, which made me listen even more carefully. Sadly, I saw a wariness there that came from being screamed at earlier in the day. It almost felt like a pattern Deeks may have experienced with his dad, who might very well have semi-apologized for losing his temper when Deeks was a child.

By the way, if Kilbride was trying to be encouraging, he needs to try a little harder. Telling Deeks that he didn’t envy his efforts to balance job and family felt a little hostile, even if he has confidence that Deeks can do it. But referring to Rosa as “your daughter” was another lovely little way to reinforce that Deeks is actually a father. And by the way, Admiral, you really should be more impressed with Deeks because he is, in fact, killing it as a dad balancing job and family.

That’s more than enough from me! Come back later this week for new editions of Deeks’ Surf Log, Kensi’s Journal, and the Drabble of the Week, and come back this weekend for a preview of next Sunday’s new episode. In the meantime, what did you think of “Survival of the Fittest”? Tell us all about it in the Comments below!