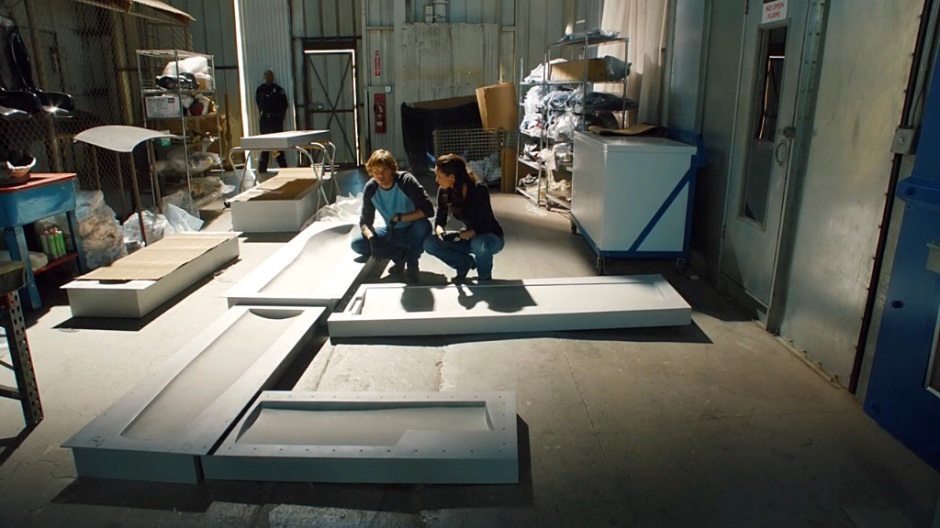 With all the talk of drones in the news lately, it’s not surprising that the team would eventually tackle the subject and its relationship to terrorism and put their own spin on the topic. This week the NCISLA agents are after a terrorist group that use a drone to kill a another suspected terrorist and the team has to find out the connection. Kyle Harimoto’s name is on the front page of the script and we have David Rodriquez making his NCISLA debut as the newbie director on set. Let’s see what this duo can do!

She drives me so crazy!

It was a strange opening scene but it had its moments as Deeks monopolized the conversation in an informal team gathering in the firing range. Where else can you get to hear about Sam’s need for perfection, Deeks’ dreams of becoming a cowboy and Monty’s anxiety issues around his potty habits? Now all we need is Eric talking about his high school play audition and… oh geez, too late!

The murdered victim, Elias Minas is a Greek nationalist placed on the no fly list for his high ranking terrorist activities with an anarchist group (PK) that is accused of bombing the US embassy in Greece. As the team sets out to investigate the crime scene we find out that in her spare time Nell is an expert in radio controlled aircraft. Eric is so proud he could explode! (Granger: If you two don’t cut out the Ewok routine, I’m going to send you home.) Kind of a strange hobby, but then again it is Nell.

At the boatshed, Hetty finds out more from a homeland security agent that Minas was a traitor to the terrorist group where he once held a high ranking position. Minas gave up highly sensitive information about the group in exchange for his freedom. The government was able to arrest other members due to this intel and in return he was granted witness protection. It’s been three months since then and the man has vanished without a trace.

Back at the scene, Sam and Callen interview the main witness to the murder who explained that Minas was agitated and nervous after seeing another member of PK that Minas had fingered. The terrorist, Frank Kouris arrived in the States before Minas. Callen has to uncover what his real motive is for being here and was finding Minas just a lucky happenstance?

Ah… Callen knows his partner so well and chides him for his constant need to excel in everything he sets out to master. I never thought of Sam as a perfectionist but it was an interesting peek into the disciplined mind of Sam Hanna. Although I understand Callen’s frustration, it does make Sam a very interesting subject for analysis… but falconry? Now he’s just messing with us.

Kensi also loves to mess with Deeks’ mind as she agrees to go skateboarding with him after we find out that the detective has a passion for the sport. I tend to agree with Deeks and feel she may back out on that promise but then it is a new and improved Kensi! So who knows? Kensi and Deeks have been sent to Long Beach to check out the origination of the drone launch only to find the dead body of the warehouse owner. They also discover all the material for building the drone is stored there as well.

Sam and Callen get to do their health inspector routine at a Greek restaurant in order to close in on Kouris and his gang which promptly turns into a classic gun fight. Sam brings down Kouris but not before Callen gets to kid him for taking so long. The restaurant scene was a classic bromance interaction between the two that we always enjoy watching. Nobody does it better! The banter continues in the boatshed as they interrogate Kouris who insists that PK didn’t kill Minas but that someone else actually beat them to it. Bealsky (aka Eric) finds that Minas had an encrypted account with Chauvenet where he may be offering his services as a killer for hire. But something doesn’t look right. $50,000 is a paltry sum to pay a killer and Kensi and Deeks find out why. Minas wasn’t paid to kill someone… it was for proof of concept in order to develop an even larger drone for a terrorist attack. The buyer kills Minas with his own weapon of destruction, effectively removing him from the picture all together.

The final piece of the puzzle is discovered as Sam and Callen check out Minas’ old apartment and have to kill an intruder who is identified as a member from the fringe cult group called Live Free First. The organization hired Minas because of his aeronautics background and to construct a drone for an even bigger terrorist attack on the “capitals of corporate greed”… Los Angeles and New York. The team is able to track down the larger drone and they sprint to the scene to stop the attack… but not before the drone is released and the pilot escapes! An oil refinery is the intended target and the team pulls out all the stops in an exciting conclusion to block the pilot and the plane from completing their mission. It’s Nell to the rescue as she talks Callen through the precise steps needed to regain control over the remote and crash land the drone just yards away. Wow! Just in time!

Later that evening, Nell gets her first taste of Hetty’s high-test whiskey as the two have a special tete-a-tete to discuss Nell’s future within the organization. We get a glimpse into how the young agent views her skills and why it’s so important to realize her dream on her own terms. It was another eye opening moment into this character’s life and I appreciate being able to look deeper into her soul. Nice moment between mentor and apprentice.

I was wondering when the mole would return. Looks like Hetty is still looking within her team and the implications are very serious not to mention scary. I’m sure more will emerge as the season progresses.

Deeks: Long Beach has the El Dorado State Park. Do you know what that is? That’s 15,000 feet of smooth concrete skateboarding bliss.

Kensi: What is it with you and skateboarding?

Deeks: What do you mean?

Kensi: But kicking a board down a dirty street, dodging cars? Not interesting….

Deeks: Alright but you and I skating a pool, you know what I mean, the wind in your hair, flowing through transitions….you do that once and I guarantee you, you are going to be hooked.

Deeks: Ok, I mean I feel like you’re messing with me, but I’ll set it up.

Kensi: How hard can it be? You can do it. Federal agents!

This episode deserves an A+ for action and allowing us to get a little further into the minds of Sam Hanna and Nell Jones. Despite Callen’s teasing, Sam is a very interesting guy. You have to like someone who has such a need to explore the world around him. And Nell knows herself well. She realizes it’s going to take more than brawn to make a seasoned agent. I love how she is taking the road less traveled.

Don’t forget to read Deeks Surf Log and Kensi’s Journal to find out what they thought about this week’s mission. And come back next week for my next review of “The Grey Man”. Looks like Kensi is going to be dishing out more secrets to Deeks about her past! See you then!