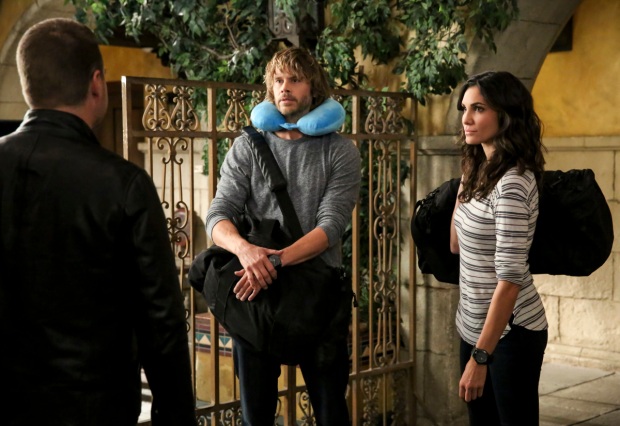 Airing:  January 14th
Filming:  October 31st to November 8th
What CBS is telling us:  While Hetty is being tortured by her captors in Vietnam, Eric and Nell find a clue to her whereabouts, prompting the team to organize a rescue mission with very little information, on NCIS: LOS ANGELES.
What we think is happening:  Operation Rescue Hetty begins.  Also, a really cool callback based on one of the promotional photos and sneak peek.  This episode was shot before last week’s episode.

Carl Lumbly as Charles Langston
John M. Jackson as A.J. Chegwidden
Jeff Kober as Harris Keane
Long Nguyen as Dang
The men recently around Hetty are all back for this episode.  Lumbly was last seen in “Golden Days” enjoying a toast to Owen Granger.  Jackson, Kober and Nguyen were all in “This is What We Do” (episode 200).

Gabriel Olds as Spencer Allen
This is the third NCIS related guest role for Olds – appeared in the “Child’s Play” NCIS episode in season seven and “It Happened One Night” from the first season of NCIS: New Orleans.  He also played Lt. Commander David Ridley in the “Friendly Fire” episode of JAG‘s eighth season.

James Handy as Nelson
Handy’s first role was on the soap Ryan’s Hope in 1977.  He has been working ever since.  He was in feature films from “The Verdict” (as the victim’s family member looking for justice) to “Logan” last year.

TV guest roles span from Cagney and Lacey to Wiseguy; from Quantum Leap to The X Files; from ER to The West Wing and from Criminal Minds to Castle.  Played Arthur Devlin in Alias.   Is one of those “That Guy” actors, as in “I know ‘that guy’ from somewhere.”

Kenny Leu as Billy Van
Played CIA Officer Kenny Young in the “Stop the Bleeding” season 13 premiere of NCIS.  Was Sgt. Eddie Chen in The Long Road Home.  Appeared in episodes of Scream: The TV Series, Zoo and The Player.

Back at it again! #TableRead #NCISLA

Sylvia Kwan as Young Woman
Appeared in an episode of 90210.

Insider Intel:   TVLine had an article.

Official Photographic Evidence:  Back to SpoilerTV.
If you look at what Eric is holding – that’s a nice call back to season two’s “Deliverance” and “Absolution” episodes.

This episode was filmed on Halloween:

Having fun on the set:

Barber: what do you want? Jerry: Just a little off the top. Barber: say no more

Being careful on the set:

Short and to the point.

So Hetty is pro-Neric giving them each a part of how to find her.

Maybe Callen should have invited Mosley for drinks last week.

And from Eric Christian Olsen, “the goods”:

HUGE episode of @ncisla this Sunday. The future of Hetty dangles delicately in the balance. Start doing your breathing exercises now, it’s about to get HEAVY. #ncisla #cbs

Daniela Ruah notes that this episode is part one of two.  Well, it is also our last new episode for about two months.  CBS is airing “Se Murio El Payaso” at 10PM ET next week (against the NFC Championship Game on FOX).  On the last Sunday of January, CBS has the Grammy Awards.  February is all sports all the time on NBC with the Super Bowl starting the month (CBS is airing “Party Crashers” again at 10PM ET) followed by three weeks of the Olympics (and likely more reruns).  The first week of March is the Academy Awards on ABC (another likely rerun).  So we will most likely be back on March 11th with part two and what should be a fairly straight run of new episodes (probably just one preemption for The Academy of Country Music Awards).