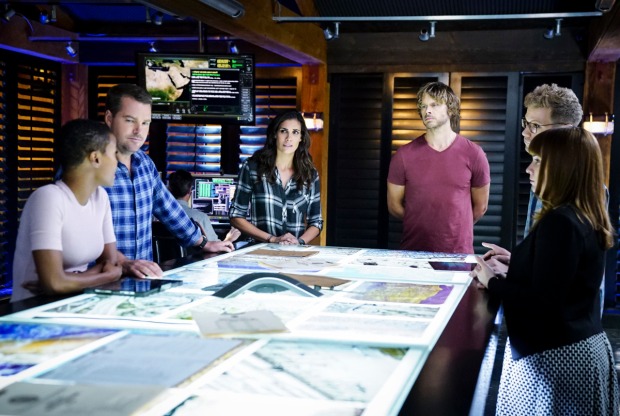 Airing:   November 19th
Filming:  September 20th to September 29th.
What CBS is telling us:  The NCIS team must locate a group of unknown assailants who illegally crossed the border and attacked California Highway Patrol officers. Also, Homeland Security sends over Specialist Sydney Jones (Ashley Spiller), Nell’s older and bossy sister, to assist NCIS with the case, on the 200th episode of NCIS: LOS ANGELES.
What we think is happening:  It is the 200th episode so that means explosions (this is NCIS: Los Angeles), familiar faces (good and bad), family members fans know along with family members fans are about to meet.  Happy 200!

Happy #NCISLA 200th episode taping! Swipe to checkout all the details from our awesome cake!

Pamela Reed as Roberta Deeks
Tony Curtis Blondell as Guy
“Bertie” and Guy were in the season nine premiere.

Jeff Kober as Harris Keane
Long Nguyen as Dang
Both back from “Can I Get a Witness” in the first week of November.

Sammy Sheik as Tobias Thoma / Ahmed Han Asakeem
Last seen in “Queen Pin” where he was not credited with his pre-terrorist name.  Tobias Thoma was mentioned in the season eight opener but he’s been called Asakeem ever since.

Zeeko Zaki as Aimon Shah
Was the money launderer in “Unleashed” who Sam questioned with Sabatino in the club.

Ashley Spillers as Homeland Security Specialist Sydney Jones
As an older sister, I’m a tad disturbed by the term bossy – we’re just more experienced than the younger sibs and impart our wisdom gained by experience.  Plays Janice Swift in Vice Principals and appeared in episodes of Driving Arizona, Maron and The Middle and well as number of short films.

Karan Oberoi as Fazan Kamsour
Was the half-year long wanted terrorist, Parsa, in season 11 of NCIS.  Played Raj in Overruled!, PJ Talwar Mehra in Combat Hospital and Alan Wells in Notorious.  Had guest roles in episodes of The Border, The Listener, Covert Affairs, The Blacklist, Castle, Containment, Conviction (2016) and Training Day.

Alex Gonzalez as Enrique
There are several working actors with this name.

Hugo Garcia as Driver
Appeared in a number of Spanish language series for Univision and Telemundo.  Had guest roles in a number of series including Cold Case, Blackout, Unusual Suspects, The Fosters, Graceland, Mixology, Inbetween, Notorious and Teachers.

Ricardo Walker as CHP Officer
Plays Agent Prince in Marvel’s Agents of SHIELD.  Appeared in episodes of CSI: Miami, Conviction (2006), New Amsterdam, Life of Riley, Ray Donovan, Hit the Floor, The Catch and How To Get Away With Murder.

E200 #NCISLA is coming your way next Sunday night 11/19/17#CBSSundayat9PM Thanks to our loyal fans for sticking with us for 9 seasons. #bestcastandcrewinthebiz is very grateful and blessed. Written by #RScottGemmill

A grateful cast and crew:

Happy Friday to our #NCISLA family around the world! #NCISLA200

Time flies, thanks to our cast, crew and our amazing fans for getting us to 200. #ncisla

Sunday marks the 200th episode of #NCISLA! Star @DanielaRuah tells us how the mood on set has changed between episodes 1 and 200. pic.twitter.com/JTyvdSMF50

With just a few days until #NCISLA’s 200th episode, hear how the mood on set has changed from star @reneefsmith! pic.twitter.com/lNMNQC9U3L

There's something to be said for spending a ton of time together! @BarrettFoa tells us how the dynamic has changed on the #NCISLA set. pic.twitter.com/ymSZMhGu5I

Hanging with the director:

#bts @DanielaRuah #ncisla200 Kensi faces the brutal villain who nearly took her down. Will his plea 4 redemption convince her to forgive. 🙏🏼 pic.twitter.com/GvQwRjvk7R

Action!Hetty will make an appearance:

This week in having your photo taken with LL Cool J:

They taped NCIS LA by my house all day so I went to check it out. Didn’t know I was gonna meet LL Cool J so I look a mess, but he still took a pic with me. Haha. And such a nice guy!😍 #LLCoolJ #LLstillgotit #Doinit

Oh, the places they shoot!

It wouldn’t be a milestone NCIS: Los Angeles episode without an explosion.

This video is from the TVLine.com article:

Possible Sports Related Delays:  CBS has a full doubleheader this Sunday with most the country getting the New England Patriots vs. Oakland Raiders game from Mexico City.  Some viewers will get the Cincinnati Bengals at the Denver Broncos.   I will update the start time if there is a delay (there is a planned 9:30PM ET/8:30PM CT start for this episode) in the comments section Sunday night.   Other places to find the start time include the show’s official Twitter account (@NCISLA) and CBS’s official twitter account (@CBSTweet).

Any late info from the cast or crew will also be in the comment section.

11 Comments on NCISLA Classified Preview: “This Is What We Do” (S9E08)