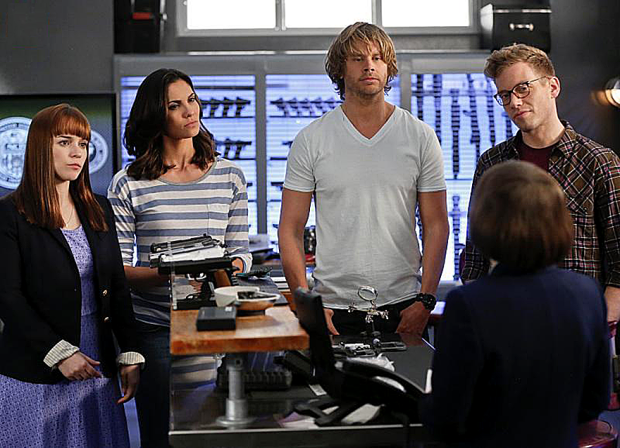 It’s always a treat to watch the team go undercover and even more so when it’s Kensi and Deeks. This is Chris O’Donnell’s third time in the director’s chair, and veteran script writer Frank Military is there to lend a helping hand.  I’m really not a fan of these episodes filmed out of order because they usually have a very disjointed feel to them. They seem to come out of left field and leave us wondering what’s going on with all the unresolved storylines.  But the opening yoga workout with Densi left all of those concerns in the dust! All that talk of deep straddling and Deeks’ pelvis left me swooning like a southern belle. (Deeks: Wow, deep straddle. That’s a crowd pleaser.)  Suffice it to say, this latest Densi interaction was also a crowd pleaser for the fans as we finally get to watch them in a sexy and provocative workout while at work. There’s no doubt how Deeks feels about his partner as he unsuccessfully tries to focus on the yoga positions and not Kensi’s iliac crest. Classic Deeks.

So after taking a cold shower, I sat down to watch the rest of the episode, which centered around a former DOD engineer who is suspected of handing over classified government information to a well-known cult organization called the Church of the Unlocked Mind. (Deeks: All aboard the crazy train.) The church may be selling military intel to China, and the team must close down the operation before any more damage is done. Densi also has to move quickly to infiltrate the group as the DOJ wants to shut down the agency’s operation in fear of offending the church.

Once inside, Kensi and Deeks go through a memory extraction technique which was very disquieting. It’s hard to believe people can be so drawn into the hype. Yet, when you are broken and desperately searching for the keys to a better life, then places like this can be a comforting port in any storm. Deeks and Kensi are pretty convincing as a couple of lost souls and the cult administrators are salivating over ways they can use the information they are feeding to them for future gain. It only gets creepier as the members try to cure Deeks’ faked aversion to water and discipline cult members with a game of Simon Says. Kensi’s ‘special’ initiation was probably the most disturbing practice. This is scary stuff.

Some of the facts Military scattered throughout the episode were extremely interesting, especially regarding cults and their litigious nature. I was also surprised they even mentioned Scientology within the same conversation, courageously poking the bear, as Callen remarks. Even the DOJ is scared of them. With missing members unaccounted for and Deeks and Kensi out of communication with the rest of the team, the case gets even more perilous. Deeks ups the ante by making the first move to try and help the former DOD engineer escape. (Some nice moves there, Deeks!) With Kensi drugged and Deeks plotting a breakout, the other members of the team try to stop the exchange of intel with China while also staging a rescue to release Densi from the grasp of the cult leaders. I was really happy to see Deeks take such a commanding lead in this mission. I don’t think anyone can complain about the lack of respect that’s sometimes dished out at his expense. This was a man on a mission and he was a lot of fun to watch as he swashbuckled his way out of the building to save Kensi and take down the bad guys. My hero!

Military gave us another dark episode of sorts with a few amusing scenes and some memorable Densi moments. COD is getting comfortable sitting in the director’s seat and he definitely has a way of getting some great performances out of his teammates. Nice work all around. We have a new episode next week and by the preview it looks like this is all getting very real with Deeks’ arrest leading up to the IA investigation at the end of the teaser. But first, don’t forget to check out Deeks’ Surf Log and Kensi’s Journal to get their sexy thoughts on this mission and of course, our Edit of the Week.  See you back here next week, folks!

Diane Volpe is a Contributing Editor at wikiDeeks.com.