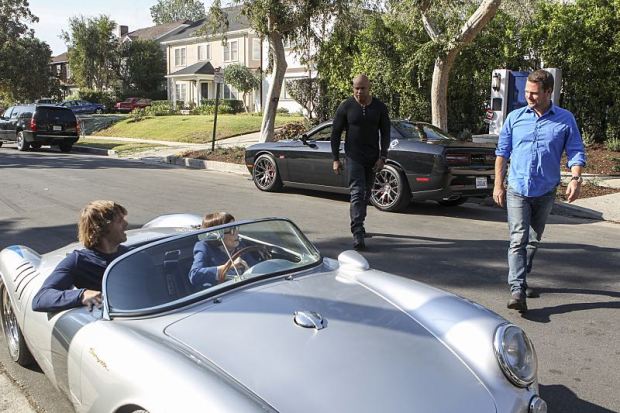 Another week, another solid episode of NCIS: Los Angeles. I’m beginning to feel a little spoiled by the show’s consistency, which is slowly but surely raising my weekly expectations. What a pleasant development! This week’s “Sirens” was completely lacking in the Densi department, and it didn’t give Deeks much to do, but it entertained me nonetheless. Written by Erin Broadhurst and directed by Jonathan Frakes, it featured plenty of humor and lots of new developments in the continuing mole storyline.

The Case of the Week

As I always say, the week’s case is automatically more interesting when the team is somehow personally impacted, and having two men shot dead on your lawn feels pretty personal (or so I assume, I can’t say it’s ever happened to me). Broadhurst balanced the drama with humor throughout, and she brought many nice touches to team interactions. For example, showing us that Callen has grown attached to his home was sweet, as was Sam pointing out how Callen was repeating his father’s decisions to push his family away. I hope Sam’s point will be heard, and that Callen will talk to his sister sooner rather than later. Hmmm, sounds like just the sort of material one would want in a Christmas episode! And again having Sam team up with Deeks to tease Callen brought a smile to my face. Callen may not have liked it, but I will never tire of seeing those two work together. Of course, the tables were turned with the business cards, but I took it as all in good fun, as (I think) did Deeks.

Hetty was delightful throughout the episode, more animated than usual. I enjoyed her scene talking over the case with Nell, particularly the way her small, pleased smile showed a little pride at Nell’s initiative. As for Nell and Carl, the interrogation scene offered a nice twist on many such previous scenes where the agent shares a personal story to bond with the suspect. I liked how Nell used her greatest asset, her mind, to manipulate Carl. I liked how she told that overly dramatic story that had me siding with Carl and laughing along with his mocking reactions (Please tell me there’s a moral to all this), only to realize that she was just biding time and setting Carl up with the other inmates. Well played, Nellosaurus.

The Simon to Your Garfunkel

I’m afraid the Deric is back. While again I generally found Eric’s behavior over the top, at least he was in the safety of Ops where he wasn’t risking anyone’s life or otherwise impeding the case. “Egon” was an excellent nickname for him (a reference to Harold Ramis’ dorky Ghostbusters character). Just like last time, Eric Christian Olsen did what he could to balance out Beale’s wackiness by providing some humorous reactions. Wiggling, really?

Eric: Dude.
Deeks: You’ve been over here humming for the last ten minutes.
Eric: Hmm. I’m sorry. I didn’t even ask you to harmonize. [Sings] I’m here – you’re here.
Deeks: I’m he- that’s a hard pass. You’re trying to make me sing the Garfunkel part and I’m obviously a Simon.
Eric: Alright Paul, take a seat. You’re lurking is making me nervous. [Deeks sits, Eric stands.]
Deeks: What just happened? Did we get something?
Eric: Ah, no, just my hourly reminder to stand up.
Deeks: To evil?

Hetty should go into the field more often. She was adorable and I enjoyed how much she seemed to enjoy being there. She was almost having too much fun. How cheeky was Deeks, telling Hetty, “Uh, Miss Daisy isn’t supposed to drive?” She wasn’t fazed in the least by his hilarity. The driving scene was incredible. It was hard to tell how much of her reactions were Hetty’s happiness at being in the field with Deeks, versus Linda Hunt’s happiness acting with ECO. Regardless, I want more of this please! And while I’m unhappy that apparently none of the females on the team are good drivers (thank you for fulfilling that stereotype, writers), it was nearly worth it for the comedy gold of Deeks and Hetty:

Deeks: Fragglerock!
Hetty: We must have beat Callen and Sam. Yay!
Deeks: I think we also beat the sound barrier. Yay. You perchance weren’t the one who taught Nell how to drive, were you?
Hetty: No. I gave her a few defensive driving lessons.
Deeks: Yeah, I can see that.
Hetty: You should probably get a haircut.
Deeks: Oh, don’t worry, next time I’ll wear a helmet, possibly a parachute. Definitely a diaper.

I also enjoyed her calling him “Martin,” and him responding, “Yes, Mom.” Just too cute. And can we take a moment to think about how wonderful it is that he seems to have three maternal figures in his life (counting Julia), along with one brother in Sam? Heck, he even has a semi-stepdad in Granger. I’m so happy for him.

Densi. No, Make That Kensi

I very much missed seeing the Deeks and Kensi together; it’s like something is off in the NCIS:LA universe. I’m sure they’ll make it up to us in the Christmas episode?! On her own, Kensi got a chance at comedy with the two moms. I thought the scene was fine, but maybe they were trying just a little too hard to be funny. I did absolutely love the idea of the two moms bonding over drinks. Again, can I get a fan fic please?

And Kensi is running now? Wow, she certainly seems close to being back to full strength. It made me wonder about some Daniela Ruah comments I remember about how Kensi’s injuries would have her questioning her future. Thinking back over this arc, I’m a little disappointed that we’ve never seen her deviate from her plan to return to work. Sure, she was fixated on possibly never walking again, but we never saw her think through what that would mean for her future. How would it have changed her career and family plans? Did she ever come to terms with the possibility of some other future? Right now she sure seems dead set on returning to work, as if there are still no other options out there. It would have been nice to see her make some realizations about other possibilities. Maybe someday when they next discuss kids we’ll see some indication that she’s thought more about how she’d make that work? I at least hope we’ll see some evidence that this experience has changed her in some way.

Sullivan freaked me out a bit, well actually a lot. Who shows up unannounced at someone’s house like that? Their walking scene was good but that little warning voice in my head was yelling that he was not to be trusted. It might be all you paranoid commenters out there getting into my head, LOL, or maybe it just was the scene’s timing, immediately following Hetty’s overly ominous “The wolves are at the door. I’m not sure it’s safe to trust anyone anymore” statement. At any rate, I was afraid for Kensi even though it made no sense that Sullivan would have been working for the mole.

When Kensi wasn’t home at the end, I even wondered if the note had been written by Sullivan- we all know that Kensi doesn’t cook dinner! (Maybe Erin Broadhurst has missed this little factoid, or maybe fan fic writers have my mind confused about what is canon?)  I thought for a moment that the note and the “home cooked meal” would send Deeks calling for reinforcements, telling the team, “Kensi is missing and I think her abductor tried to cover his tracks by leaving a homemade dinner behind- a dead giveaway that something is wrong!” I don’t even know if Broadhurst intended the extra suspense there or not, but I was feeling it for sure.

I did like the Sullivan-Kensi friendship, but it was so sad to see that Kensi’s reaction to her friend being reinstated for duty was to feel competitive and think she should be able to do the same. Again, her face told the whole story as she tried to shoot with her left hand.

Come back later in the week for a new Surf Log and Journal, plus the Edit and Drabble of the Week. Unfortunately there’s no new episode for three weeks! How will we survive? That means next weekend we’ll be without the Classified Preview, but we will have a new Top 3 with the Top 3 Deeks Undercover Roles.

In the meantime, what did you think of “Sirens”? Did you like the mix of humor and action? How about Nell in the field solo? Kensi’s progress, or lack thereof? Were you worried about her like I was? And were you as charmed by Deeks and Hetty? Tell us your thoughts in the Comments!