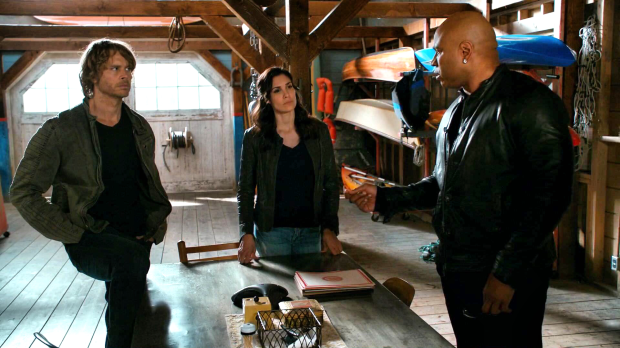 I’m excited to be doing my first episode review for wikiDeeks! Karen P does such a good job with the reviews, so there are big shoes to fill. Hopefully I can live up to the high bar she has set!

I have found a number of this season’s episodes to be OK, but not thrilling, so I was a little concerned about what I would write if the episode was underwhelming. Luckily, this turned out to be one of my favorite episodes of the year so far, so no shortage of comments for the review. “Queen Pin” was directed by Eric Laneuville and written by one of my favorite writers, Joseph C. Wilson, so not really surprising that I ended up really enjoying this episode.

I agreed to do the review before I saw that Bar Paly was one of the guest cast – I learned that tidbit just before the show aired. I completely understand that a lot of fans, including many on this site, don’t like her. I recognize I’m in the minority here, but I don’t mind her. I’m not a huge Callen fan so I happen to think they are a good (if messed up) pair.

I was planning to minimize her appearance in this review out of respect for those who are not Anna/Bar Paly fans. And then…second scene into the episode and it’s Anna and Callen on the floor in front of the fireplace! I actually had to hit pause so I could laugh out loud – so much for ignoring Anna! When I resumed watching, my Densi fan heart quickly got annoyed that we have never seen a Densi scene that was that hot.

How does self-proclaimed-loner-with-massive-attachment-and-abandonment-issues-Callen have more hot love scenes in NCIS:LA canon than Densi?! I will confess, before they were “all in” I was of the “Just get them together, we don’t need relationship in the foreground all the time” crowd. But come on, everyone else sees some onscreen action, except Deeks & Kensi? Thankfully, before I could get too irritated, Hetty barged in – “I tried to call” – and made me laugh again. I still haven’t totally forgiven her for transgressions past but scenes like that certainly help. I laughed out loud at the wicked smirk that followed her “Anna, dear…”. If Densi doesn’t get fireplace floor action except in fanfics, then neither should Anna! Get dressed and go get that terrorist!

Clearly the intent of this “road trip to get Asakeem” storyline was to re-introduce him for future episodes. But even for someone who doesn’t mind Anna, it did eventually seem as if the main purpose of the trip was to insert some Callen/Anna (?Canna, ? Allen – sorry, can’t do it!) couple time in prolonged foreplay that was so blatant even Asakeem noticed! Don’t even get me started on the making out in the boatshed scene. In the end I think this exchange captures it best: “I was just…” “TMI dear.” TMI indeed!

While our beloved Marty Deeks has shown his dark side as “Max Gentry,” I have always thought that Sam was the team member who is best able to embody truly dark undercover personas in a very edgy way, and he showed us that side of him again in this episode. Whether it was his interaction with Taylor in the boatshed – “this isn’t checkers, it’s chess”, “murdering” Taylor on the dock “as gangster as that was…” or turning on his buddy Champ and robbing him, he was as dark and dangerous as the last time he used the “Switch” persona with drug lord Tyler Brunson (played by Stephen Wozniak) in “Three Hearts.”

He embraces the badass characters so well that I sometimes wonder if he wouldn’t be the member of the team most likely to cross the line one day. His Navy SEAL training helps him keep a tight lid on himself, but sometimes that over-controlled exterior exists for a reason, to mask what lies beneath. LL Cool J really does a masterful job of taking his portrayal of Sam from his usual baseline tough, but good and kind-hearted, guy and kicking it up a notch to show that dangerous, hard edge that is icy cold and controlled.

What didn’t quite make sense to me was why this was their case and not LAPD, since it was drug dealing and not a terrorism or a homeland security threat. Eric references “King” using civilian naval contractors to smuggle drugs from overseas (presumably creating the Navy connection) and Sam previously shutting down the pipeline but not catching “King.” He also says that Sam created “Switch” for that op. However, “Three Hearts” is the only prior time we have seen him use that persona that I can recall. I re-watched “Three Hearts” just to be sure, and it certainly seemed like he created “Switch” on the fly then as he was rolling up to Brunson’s house. Despite Eric saying that “Switch” was created for Sam’s quest to find “King,” there is no reference to “King” in “Three Hearts”. Brunson was believed to be using Navy ships for smuggling chemical weapons and then turned out to be trafficking Krododil, not cocaine like “King” (not that drug lords can’t be diversified in their businesses), so there is a vague parallel there, but also very clear differences. It also seems implausible that Sam would have the time to maintain “Switch’s” rep and street cred sufficiently that “King” (or “Queen”) had heard of him and “Champ” at the jewelry store knew him. I realize these are subtle inconsistencies within the context of the larger storyline, but I always wish the writers would avoid them. I’m willing to work as a script consistency consultant!

Despite my initial annoyance at the fireplace scene that started the episode, the main reason I ended up really enjoying this episode was that so many of the Densi scenes just felt like vintage Densi – but an evolved version where they are committed and open with each other. I haven’t been able to put my finger on it enough to comment on prior episodes, but too often it felt like there was something missing.

Joe Wilson has written some great Densi content in the past (“Personal“, “Plan B“) and it felt like he tapped into the things I really enjoy about the characters. From their opening chat about getting up “on a SURFBOARD! What are YOU talking about?” to Kensi saying “I love you” and kissing him at work and then Deeks asking Hetty for his motorcycle back (poor guy, still not over it), it just felt like the kind of interactions that have been missing in many episodes this season. Perhaps that was intentional because of the storyline with Kensi’s recovery, but I missed the sweet and fun interactions, not to mention those scenes that make it clear their relationship is on solid footing.

Since Deeks so often endures ribbing from the others, he had a well-deserved hero role in rescuing Taylor after “Switch” tossed him off the dock. And their emergence from the water was classic Deeks: “He’s alive!!” followed by “Actually I AM a lawyer.” While he has all the sympathy in the world for people in difficult circumstances, he clearly has zero sympathy for drug dealers who are creating harm in his city and he let him know what he thought about his life choices.

I also loved the interactions in the van while they were backing Sam up in overwatch.

It was so sweet, and so natural. They’ve had some amazing scenes (and arguments) involving food and stakeouts. Deeks knows Kensi needs food for a stakeout and he’s prepared with her faves! So adorable.

At the same time, Deeks is still upset about what happened to Kensi because of Asakeem and Callen’s trip to bring him to LA reminds him of all of that. He’s thinking of “a thousand ways to crush Asakeem.” Yet, he’s saying it without visible anger. Anger has been described as secondary emotion – often a response to fear. With Deeks it is clear that his care and concern for her is the deep primary emotion driving his desire to deal with Asakeem. And, what is really important is that he is able to express it.

Kensi on the other hand has moved on and feels nothing towards Asakeem or Sullivan because “I have you, that’s all I care about,” followed by a spontaneous kiss in the van, leaving Deeks with the sweetest smile. Deeks responds by saying she’s more evolved than he is, but they both have really grown. Their banter was the cute and fun style I had missed, but this was definitely not the Deeks of seasons past when he couldn’t say what he meant or the Kensi who kept pulling away when things got intense.

Although I would still have written them in front of the fireplace instead of Anna and Callen (please writers, if you’re reading – hint hint!!), I think this scene is just as important as a fireplace scene would have been. It’s not just that their relationship has really deepened, they are able to talk openly, honestly, and naturally about their deep feelings and this Densi fan is thrilled!

Well folks, that’s all I’ve got for you. Come back later this week for the Surf Log, Kensi’s Journal, and the Drabble of the Week. In the meantime, what did you think of “Queen Pin”? Were you annoyed by Anna or did you find some humor in their scenes? Did you enjoy the sweet Densi scenes as much as I did? What do you think Whiting is going to do when she’s back at work – is Deeks in trouble?