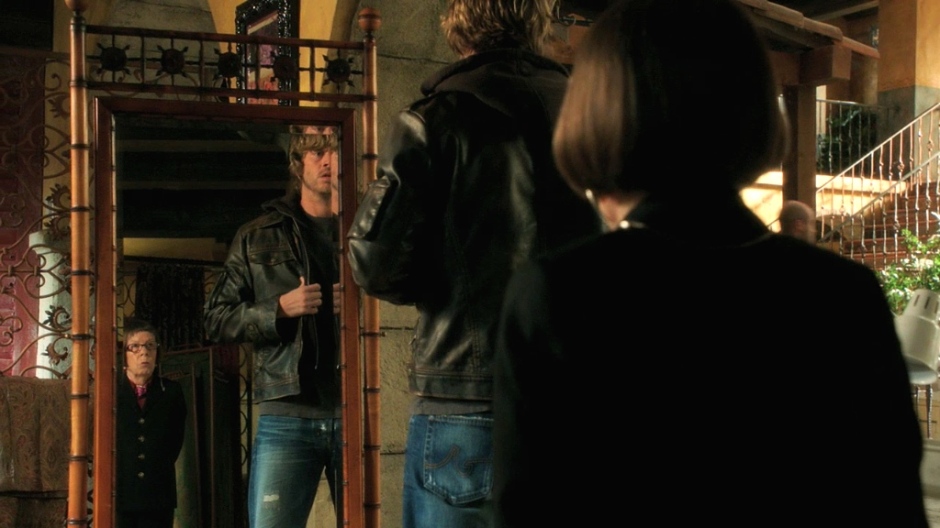 “Personal” may have revealed key events from Deeks’ childhood, but “Plan B” is the Essential Episode that showed how those events impacted his life. It is absolutely chock full of Deeks insights, maybe more than any other episode. And it’s an acting showcase for Eric Christian Olsen. We’ll talk about all that…

…But First, The Plot

In the opening scene, the audience and the bad guys are tricked into believing that the key witness against an arms dealer has been killed, when in reality the team has faked his death before he heads into witness protection. We soon learn that Deeks and the witness, Ray Martindale (winningly played by Channon Roe), were best friends as kids, giving the case a personal spin. Ray disappears, resulting in a manhunt to find him before the bad guys do, and Deeks assumes a hated alias, “the infamous Max Gentry,” to aid in the search. The team’s hunt leads to Ray’s wife Nicole, whom they discover turned on Ray out of spite when he left her for another woman. That woman, Jenna, and her unborn child are the reasons Ray left witness protection. In the end the team restages his death before sending him once and for all off to his new identity, this time with Jenna in tow.

Deeks’ Past Brought to Life

Max Gentry makes quite the impression. He’s quick-tempered, violent, hard drinking, and just plain mean, with a disdainful view of women. Meeting him gives us an incredible window into Deeks’ past, for Max’s personality seems to be based on Deeks’ father. We can see it in the way Max threatens to collect his friend’s debt from his girlfriend, possessively running his fingers through her hair, and providing a chilling display of how Deeks’ dad would have treated his mother- as his possession to control.

The contrast between Deeks and Max is fascinating, because Deeks is the opposite of Max in nearly every way. Deeks is easy going, gentle, light-hearted, and kind, and he is attracted to and supportive of strong women. The vivid contrast allows us to see that Deeks has chosen to live his life as a complete rejection of everything his father was. Yet the ease with which he channels Max (“some days it’s too easy”) shows that Deeks still carries part of his father within him. It makes us wonder a little which side is the real Deeks; it’s unsettling because it makes us question whether we should fear him just a little bit. ECO portrays this gripping psychological drama perfectly.

To continue with the psychoanalysis, if Max is Deeks’ father, then Nicole Martindale might provide clues about his mother’s personality. Blonde, meek Nicole is nothing like the strong brunettes Deeks is normally drawn to. But she wasn’t with Deeks, she was with Max. It would make sense for Max, just like Gordon Brandel, to be attracted to a beautiful but passive blonde who would allow her life to be defined, if not controlled, by the man in her life. In fact, Max and Nicole’s relationship could have had an even more Oedipal twist, with Nicole taking care of him in a somewhat maternal way. As Deeks described it, “When I got the flu the LAPD didn’t bring me chicken soup, she did.”

Seeing Nicole as in some way a substitute for Deeks’ mom makes his apology to her all the more poignant. No doubt he could have said the same words- “I’m sorry, I know that life has not been easy since you met me”- to his mother. It’s also easy to imagine that his mother might have had the same response- that somehow little Marty still managed to be the best thing in her life. It makes Deeks’ attraction to strong brunettes all the more logical, given his desire to avoid repeating the problems of his parents’ relationship.

The Real Deeks: So Much More than His Father

The episode may focus on Deeks’ “alter ego,” but we also get wonderful glimpses of the good man he really is. He has spent his life running from Max/his father. He may doubt that he’s succeeded in escaping from his father’s legacy, but in this episode we see all the ways that he has.

Deeks and Hetty share a wonderful scene as he prepares to go undercover. Hetty questions his blind loyalty to his friend, but Deeks doesn’t waver. “Somebody’s gotta look out for him,” he says. (Deeks’ loyalty, one of his strongest qualities, is on display again later when he protectively discourages Ray from acting as bait to stop the bad guys.) This moment with Hetty also shows Deeks’ penchant for blaming himself when things go badly. His line from “Personal”- beating himself up is “one of the things I’m good at”- applies here. But now we begin to understand how that negativity has resulted from growing up with a man like Max.

The episode provides other moments of genuine vulnerability, quite unusual for this point in the series. We know Deeks is delicate- make that sensitive- but he usually hides that side of himself with humor. When Kensi leaves to have Nicole picked up, the worry on his face is in clear view to us and the team, who wait for him to make a joke or volunteer for the clandestino assignment with the beautiful women. In a subsequent scene, we feel Deeks’ pain at having to lie to Nicole, and disappointment at her betrayal of Ray. The subtle shift in his expression, just a tiny downturn of his lips, when he finds out that she really did set the bad guys in motion, is so well done by ECO. When he leaves the boatshed, we get a wonderful close-up where the stress of the whole day is vividly apparent from his expression, and from his repeated “OK, OK, OK.” That he’s alone, only allowing the audience to share this moment of vulnerability with him, highlights his attempt to play it cool to the team (they should know better when he tells them, “I’m fine”). Deeks’ guilt when he finally tells Nicole the truth about his identity is also palpable; the way he blows out his breath preparing to break the news is another wonderful ECO touch (one he referenced in the DVD commentary for “The Frozen Lake“). The contrast of normally outgoing Deeks taking such a quiet tone of voice, almost a whisper as he tells her he doesn’t know how much of their relationship was real, is compelling.

His conversations with Ray about fatherhood also show us how Deeks’ childhood experiences have shaped his outlook and motivations. When Ray reveals that Jenna is pregnant, he asks Deeks if he understands what that means to him- a chance to be the loving father that his dad couldn’t be. The look on Deeks’ face is powerful- haunted, sad, moved (and again, perfectly portrayed by ECO). We see in that single expression how much Deeks wants to move beyond his own father’s legacy. Maybe becoming a good dad would allow him to prove to himself once and for all that he’s not his father, perhaps the single force that drives Deeks more than anything else in his life.

The Birth of Their “Thing”

Amazingly, although this episode is heavily focused on Deeks and his back story, it still manages to include a ton of Densi. Kensi is gaining the same insights into her partner as the audience, and watching her reactions is nearly as interesting as watching Deeks. Kensi’s face as she sits in the car listening to Max Gentry for the first time mirrors our response. First she chuckles at Max’s joke to his friend Joey, assuming that this is still mostly Deeks she’s listening to. But as Max turns nastier, her expression changes. She’s realizing that this alias isn’t “just a guy” that he “threw together, no big deal.” Then later at the boatshed, we’re not the only ones interested in her reaction to Deeks kissing Nicole- Callen turns to watch her as well.

Deeks is desperate to prevent Kensi from seeing this darker side of him. He’s miserable when they arrive at the pool hall, instantly rejecting her offer to back him up inside. Later at the market he again asks her to wait in the car. He realizes what a terrible person Max is and he’s ashamed of his behavior, and for carrying this part of his father inside of him. To have to take on the persona of the man who caused all this anguish and shame must be terribly painful. Callen observes that Deeks’ alias isn’t really an alias, that he is too real to be completely fabricated. When Deeks answers him while looking directly at Kensi, it’s clear that more than anything, he’s concerned about her opinion.

No matter what Kensi makes of Max Gentry, she is incredibly supportive of her partner through the entire episode. She gives him a sweet (unprecedented at this point) hug at the airport after he sadly says good-bye to Ray. She questions him without judgment as they pull up to the market, trying to understand Deeks and Max a little better. She betrays no signs of jealousy (so different from the Kensi of “Parley”) and simply tells him what he needs to hear by encouraging him to tell Nicole the truth. And of course she has his back in the final shoot-out, taking out bad guys with her rifle, and checking that Deeks is OK after the final boom.

Finally, there’s the delightful Classic Densi ending scene, where she reveals that she had overheard Deeks and Ray’s earlier discussion of the now-famous thing:

Kensi: Planning on calling Ray any time soon?
Deeks: No, no I’m not.  Why do you ask?
Kensi: Just, when you do, tell him Wikipedia says ‘Hi.’
Deeks: I’ll do that.
Kensi: Oh, and um, I’m glad our thing is working out.
Deeks: No thing.  There is no thing!

Dave Kalstein and Joseph C. Wilson outdid themselves with “Plan B,” giving us a beautifully written, exciting episode where the stakes were very personal to our favorite detective. While we all love a bad boy in a leather jacket, when I think about all that Max Gentry symbolizes for Deeks, all of the pain he represents, I hate that he exists at all. Watching Deeks channel his father, to become the very person he has worked his entire life to avoid becoming, is heartbreaking. That said, the revelations about his past that come from meeting Max were a huge leap forward in our understanding about Deeks. The new depths “Plan B” added to this complex character make it essential viewing for any Deeks fan.