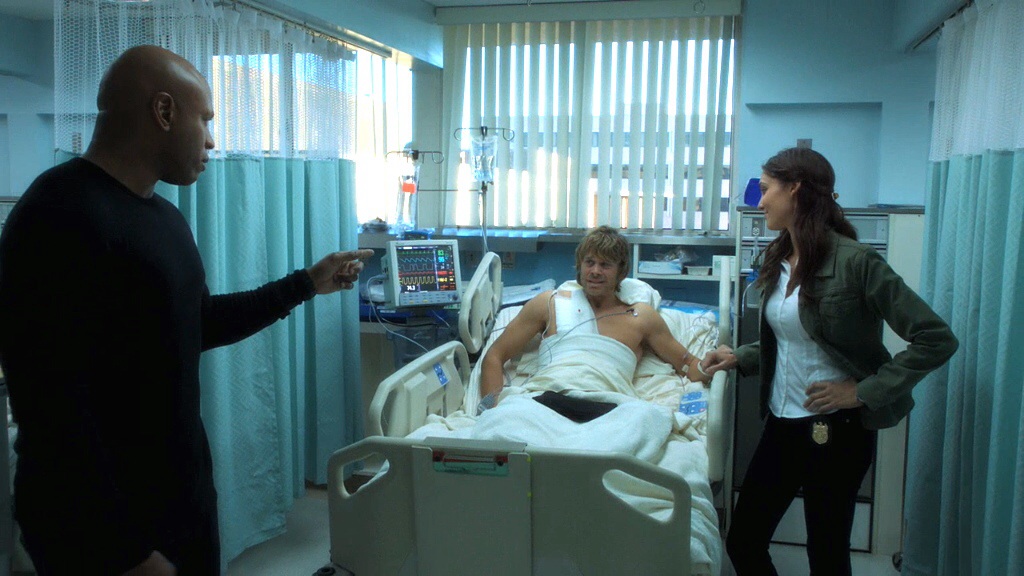 As we and the team have oriented ourselves to the addition of our detective, everyone looks forward to the lightness and fun Deeks offers. This continues in “Personal”, but it takes a notable backseat in this edition. With this rare, yet foundational Deeks-focused episode, we’re taken to a deeper level – a look at who Deeks is as a man.

Viewers are accustomed to the introduction of the crime-based plot at the top of the show traditionally followed by the opening credits and some delightful partner or team banter. Not this time. In an unexpected (and quite enjoyable) twist, the show immediately launches with Deeks jogging along his beloved beach. However, before there was time to fully appreciate this casual start, the detective finds himself in the midst of a convenience store robbery and viewers are stunned at the sight of Deeks prone on the floor, struggling with a bullet wound, facing down the barrel of a gun - all before the opening credits. For Deeks-lovers everywhere, it was clear we were in for a serious look into the team’s newest member.

Up to this point, very little is known about the LAPD Detective aside from his jovial nature, joking personality, and often atypical approach to operations. A few breadcrumbs have been dropped along the way regarding his connection to former handler, Jess Traynor and reasoned attachment to his particular service weapon. Oh, and he has a dog. However, even these are all directly tied to his professional persona. We know very little about the man. It is in this episode his protective humorous mask is pulled aside.

It’s no surprise Hetty’s announcement of Deeks having been shot affects his partner most. As if Deeks being shot didn’t force us to deal with our own angst, now we’re prompted to consider how Kensi is responding. Per previous strategic storytelling, our minds – just like Kensi ‘s- flood with memories of her past losses – her father, Dom, her fiancé. Could her current partner be next? However, there’s no time to ponder the worst case outcome. These agents do what they do best – work to solve the mystery of who shot Deeks, why, and to bring them to justice. The detective may be a new addition and not an official NCIS agent, but as Hetty indicated in the premiere, Deeks is one of them. Unlike in “Human Traffic” when the team works to save Deeks more out of obligation, by “Personal”, they rally around him like a family.

Compounding the situation is the revelation of just how much the team doesn’t know about Deeks – including Hetty. Now that is saying something. Something so vital as a next of kin to be unknown to all of them indicates how much personal knowledge is lacking regarding the detective. This provides a wonderful opportunity for deep character development, and serves as a clue that larger issues related to his background are likely lurking in the shadows.

As Deeks regains consciousness (and his partner works to tamp down her worry), the partners finally engage in their comfortable banter signaling to viewers all will be well. Even wounded and in pain Deeks’ go-to of “defusing tension with humor” is at the peak of health. He simultaneously messes with Kensi while endearing everyone in the repeated utterance of her now-famous nickname. Deeks effortlessly follows that by twisting his partner’s disingenuous threat into something straying far from their professional status while countering with his own suggestion of “tattling”. The genius of Marty Deeks’ multi-tasking mind and expressive words, turning a solemn situation into something to his benefit, is on full display.

The heart of the matter

The episode returns two-fold in its gravity in discovering Deeks had been targeted – and that his partner is fishing. In working to solve the next of kin question Kensi quickly stumbles over the term “girlfriend”, but Deeks only deflects it. All humor is gone when even the detective confesses to be at a loss on the next of kin topic. And the plot deepens. What kind of traumatic family situation (and life in general) would leave someone with no one to list at the most critical of times? It is at this moment any cursory interest in Deeks’ background grew to a notable level of significance.

Through Callen and Sam’s investigation it is learned the lengths Deeks has gone for a fellow cop in aiding him with sobriety as well as insight into his work ethic. As many viewers had already long considered and quietly hoped, there is affirmation that beneath Deeks’ comedic cover is a barely-concealed kind, solid, and sensitive soul.

Back to the banter, Deeks’ customary curiosity is shining bright with his inquiry about Kensi’s own experience with flesh-piercing bullets. (Note this is a query that still has not been answered.) This woman, wily in her own right, divergently responds to her partner with a fitting sentiment “There’s a lot about ourselves that we haven’t told each other yet, so let’s just… respect the pace. Ok?”  Since this episode writers have gifted fans with key pieces to the puzzle that is Kensi Blye, but it seems the scale hasn’t been equally weighted for our dashing detective. Thus, when might we be presented with corresponding details of Deeks’ background? (Season 6, anyone? Please? Surely by now even Deeks is tired of withholding such information, right?)

Up to this point Deeks has been painted by the team and viewers alike as the jokester; it is here in “Personal” that his characteristic demeanor is simply a protective façade. As masterful as he is at infusing humor into serious situations & self-aggrandizing, he is equally skilled at self-berating.

Kensi: You shouldn’t beat yourself up.
Deeks: Can’t help it. It’s one of the things I’m good at.

(So open. So honest. So true. For him to reveal that to her in a serious, non-joking manner while he is so vulnerable – never making eye contact with her & lying in the hospital bed injured – is incredible.)

As we approach the end, the totality of Eric Christian Olsen’s performance demands attention. While a casual viewer might consider it to have been an easy time lounging in bed, from an acting standpoint, it only creates a greater challenge. The physicality of his acting is severely limited. With the exception of his opening and closing scenes, his normal law enforcement habitual actions are notably absent: no chasing down bad guys, no pulling his weapon, no tension-filled shoulder brushes with his partner, no sassy hip-stances, etc. Other than responding to Sam’s warning, he even avoids the nervous tells of scratching his scruff or head. Yet the broad range of emotions is palpable: pain, humor, uncertainty, flirtatiousness, insecurity, guilt. Yet it is the overwhelming sorrow that shocks us in the fact that as just a boy Deeks took aim and shot a man. With no explanation, viewers’ minds whirled with possible circumstances that would elicit such an event.

The ultimate straw that breaks the back of this episode, this character, and our hearts is the final revelation by the eternal secret-keeper that is Hetty Lange: the man Deeks shot in his youth was his very own father. The gravity of this knowledge, considering the reality of this result weighing on Deeks the majority of his life is… disheartening.

As a faithful member of Team Densi, it was a joy (even given the hospitalized circumstance) to watch Deeks purposefully pursue insight of his partner, whether it be for professional distraction or personal gain. Everything that we’ve come to expect from Deeks was delivered in spades with the flirtation (girls on the beach, nurse, Kensi), Jell-O, reference to Kensi’s jeans and butt, the sponge bath comment, and Fern & Wonder Woman. He tries to learn more about Kensi, to help her feel comfortable in opening up to him. (And not to be overlooked by the gloriously captivating storytelling, in the end, our scruffy knight saves his damsel in distress.) Yet, for all the external fluffy goodness from our detective, it severely pales in comparison to discovering the internal qualities that make Deeks a man.

In the initial presentation of “Personal”, it may be considered a notable piece in Densi’s developing ‘ship and useful addition to the knowledge base concerning the newly-minted team member. However, in subsequent viewings, it wasn’t really about those things at all; it went much deeper. Deeks was so in his own head, this time his partner was mostly a distant (if delightful) distraction. Viewers were gifted with expertly expressed thoughts, emotions, and insights into how Martin A. Deeks deals with, stores away, is haunted by, and overcomes adverse life experiences. It’s a rare and essential look into the soul of our favorite detective, and one this fan hopes is the first of many.