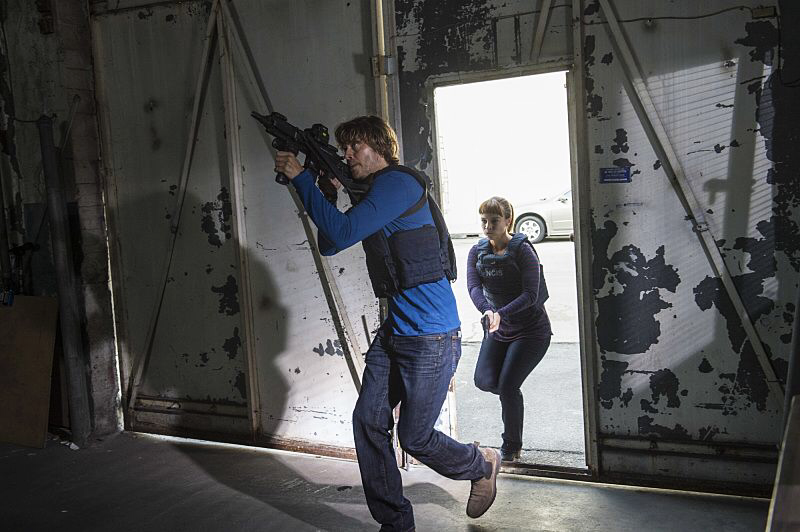 Episodes of NCIS: Los Angeles are always better when a team member is personally affected by a case. Early Season 8 has been made consistently more involving because of the continuing storyline around the injuries Kensi suffered during case number two. And so it was with case number four. Jordana Lewis Jaffe, who has never made my short list of favorite NCIS: Los Angeles writers, helped this week’s episode “Black Market” (directed by James Hanlon) rise above the average case of the week by providing some sweet, touching, and even surprising moments surrounding Kensi’s plight. Of course, that’s not to say I didn’t find anything to complain about…

A few of those complaints had to do with the case of the week itself, which was pretty forgettable. I was underwhelmed by bad guy Zhang Kiu’s personality- he didn’t quite strike me as a “deranged crime boss.” And were Callen and Sam truly that good in their interrogation? Their brilliance in this instance was not as clear to me as it was to Deeks and Nell. Then the two bad gals didn’t even get to say a word! Maybe the showrunners were trying to save money- I’ve heard that actors aren’t paid as much if they have no dialog.

Also, I was a bit confused by Nell in this episode. She seemed plenty confident last week with all her “fisticuffs” (loved that line from Sam). Here she was back to looking unsure of herself and feeling guilty about replacing Kensi. I’m not saying any of that is unrealistic- she should feel unsure of her ability to choke out bad guys twice her size (I’m still not convinced she actually could). And the way she hesitated against the “assassiness” when Ming Wah kicked away from Deeks made it clear that she’s still lacking in experience. It all felt a bit repetitive to me, including her final conversation with Granger. On its own it was really nice, but thinking about Nell in the field the past two seasons, I felt a bit of déjà vu. Haven’t we already seen similar conversations between her and Granger, and her and Hetty?

No One is Irreplaceable

Aside from the plot, and a couple of quibbles with Deeks’ scenes (see below), the conversations between team members were all beautifully written. I’ve long said that I’d much rather the show spent more time on character development and less on the case of the week, and I think it did so very well here. I appreciated the way Kensi was still at the forefront of every character’s thoughts. That’s of course as it should be, but it’s not necessarily the way the show has gone in other situations (e.g. Densi bickering while Sam’s in surgery in “Expiration Date,” Sam and Callen apparently unconcerned about arrested Deeks in “Internal Affairs”).

The scene where Granger was looking at replacements for Kensi made perfect sense but gave me pause as thought about what this would feel like if one of the main characters had died. I was never attached to Dom in Season 1, but losing one of the main four now would be pretty devastating. Fingers crossed we never have to watch that happen! At any rate, it successfully drove home the seriousness of Kensi’s injuries. And hey, at least we didn’t see Anna’s face among the candidates! Eric was his usual sweet self, trying to stay positive and defend Kensi. And Granger’s world-weary reply was so him. Overall a great little conversation between the two.

Eric: I know for a fact that Kensi’s going to be back. Besides, she’s irreplaceable.
Granger: I wish that were true, Beale, but it’s not. For any of us.

I thought it was a nice touch that this scene would have motivated Granger to go and see Kensi. Did I see some sparks flying between Granger and Julia? They do have so much in common! My mind immediately leapt forward to seeing them together. But how freaky would that be for Kensi? I actually thought hearing her mom go for coffee with her boss might be enough to bring her out of the coma. And it would also be pretty freaky for Deeks- could Granger be his eventual father-in-law? Yikes! I could totally see him as granddad to those mutant ninja assassins- I’m sure he could teach them a trick or two. OK, I might be getting just a wee bit ahead of myself.

The other thing I loved about that scene was Julia (Laura Harring). The story she told about reading Kensi’s favorite book after she ran away touched me. It made me feel how desperate she was for Kensi to wake up now, and gave us a glimpse into how she felt when Kensi ran away. It’s a subject that’s often dealt with in fan fiction by showing Julia as relatively uncaring, but here we saw that of course, she was heartbroken to lose her little girl.

Will There Be a Happier Ever After?

It feels odd to refer to the “Densi” scenes, since Kensi’s contributions are pretty insubstantial at this point, but I did enjoy seeing Deeks talk to her. He was adorable bringing her breakfast at the beginning of the day, and kissing her goodnight at the end. His devotion is completely expected but beautiful to watch. And how good did we all feel hearing him refer to her as “my fiancée”?

And if Deeks wasn’t talking to Kensi, he seemed to be talking about her. It showed how she is constantly on his mind. Ugh, the poor guy! I will say that I was waiting for him to make a crack about Kensi’s far less than perfect driving in the car with Nell. I’m not sure I love that the females (except for Hetty) are the bad drivers on this team- talk about stereotypes. At any rate, the scene captured how hard it can be to talk to someone about their sick or injured loved ones, and how easy it can be to say the wrong thing. Eric Christian Olsen’s pained expression was heartbreaking- someone needs to give Deeks a hug!

The scene in the boatshed was pretty adorable, and don’t we all agree that there was some serious ECO improv happening as he talked about Kensi’s “weird eye”? It was simultaneously funny and sad, because Deeks just couldn’t help but talk about her, and his love for her just shone through the joking. ECO has been consistently great so far this season- I don’t think he’s hit a single wrong note. It’s hard to imagine that he was ever typecast in comedic roles.

Deeks: Kensi’s the best. Do not mess with her because she can do Good Cop-Bad Cop all by herself. She just uses her good eye and then her weird eye.
Nell: She probably freaks people out with that thing.
Deeks: She does. She starts off all nice and charming and then she gets in there and she turns on the dead eye and she’s all ‘What? Did you do it? Did you do it? Dead eye’s coming after you. Did you do it?
Nell: Alright, Shaggy, I got it.
Deeks: I’m just saying, she gets stuff done.
Nell: Yeah. She’s one tough mutha.
Deeks: Yeah, I know… I know.

Here’s my one quibble with these otherwise strong scenes… Each time we got to the really emotional part, we cut away or the subject was changed. Deeks started talking about the case in the car with Nell, and Eric interrupted in the boatshed. I totally get that Deeks is hanging on by a thread here, and he just can’t expend the emotional energy to share his feelings or seek fuller comfort from a friend. It makes sense to me and I would do the same if I were Deeks. But as a viewer, it frustrated me to have ECO begin to reveal his true emotions only to stop. What was amazing about the end of “The Queen’s Gambit” was that the director, editor, and writer all took their time. They allowed ECO to take more than a couple of seconds to wordlessly think about all that he might lose, and it allowed us those same few seconds to share those sad thoughts. These small touches made that scene a classic. Here we just kept moving right past the emotional parts. The scenes were strong, but they just didn’t quite rise to the same level as last week.

Easy with the “Martin”

The final scene resulted in mixed emotions for me. First, how adorable is Sleepy Deeks, thinking he was talking to his mother? Of course I wish he had turned down Hetty’s offer, or at least fought it a little more to stick around. And ECO and Linda Hunt were adorable together, with more banter between them than we’ve seen in awhile. It was nice to be reminded of a time when these two had such sweet conversations.

Come on Hetty, you know you wish you had a son like Deeks!

I also appreciated the idea that unconscious Kensi might respond almost out of muscle memory to a direct order from her boss. But as a fan of Deeks and a non-fan of Hetty, it rubbed me the wrong way that Hetty would get to enjoy that moment while Deeks wasn’t even present. (Do we think she even called him to tell him, or did she let him go home to sleep without an update?) As she talked to Kensi, I kept flashing back to Hetty sending her to Afghanistan, and all that Kensi suffered as a result. Imagine how Deeks’ face would have lit up if he had been there, or if Kensi had responded to his touch instead. His eyes (and smile) would have been even brighter than when he found that train set in “The Livelong Day.”

Of course, leaving Deeks in agony for another week will only make his joy when Kensi does finally open her eyes all the more satisfying. I think it’s why I love the hurt/comfort genre so much- the more my favorite characters suffer, the happier I am, and the more moved I can be, when they finally find safety or peace or happiness. (Again, what is wrong with me?)

The most gripping few seconds of the night were in that promo for next week. [Spoiler alert] I can’t wait to see what’s happening that leads Deeks to tell Hetty NO to anything. I found myself saying out loud, “Go to her, Martin!” Can’t wait. That one scene alone just might be enough to make up for an episode full of Anna. (Plus we only have to wait a week!)

I’m afraid Kensi still isn’t quite up for making any new entries in her journal, but come back later this week for what are sure to be angst-filled entries of Deeks’ Surf Log and the Drabble and Edit of the Week. This weekend we’ll name the Top 3 Deeks/Hetty talks, plus don’t miss Tess’ Classified Preview for “Ghost Gun.”

In the meantime, what did you think of “Black Market”? Have I been too nit-picky? How did you feel about all powerful Hetty getting a reaction out of Kensi? And what do you think about Granger and Julia? Or should I say Grangia? Granlia? Juliger?