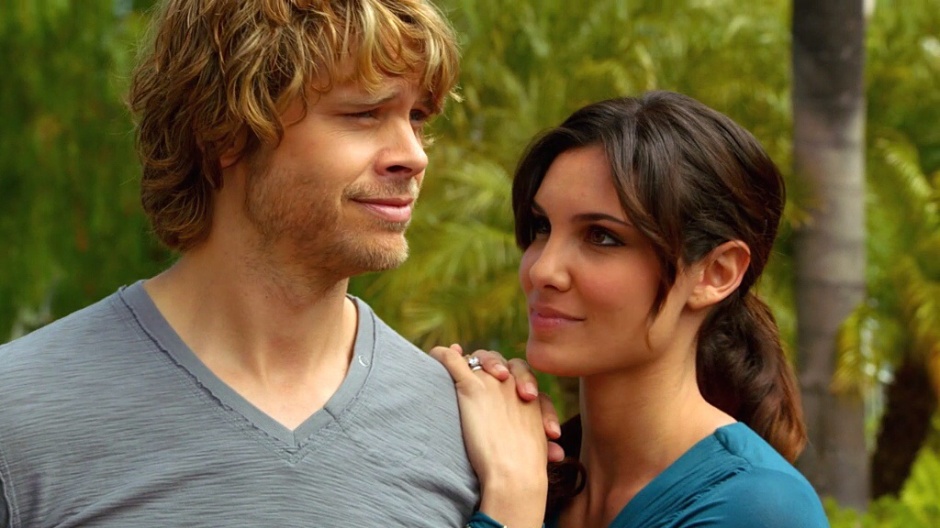 A good Densi undercover assignment can be as entertaining to watch as a scene with great banter like those we discussed last week. It lets the characters- and the actors- pretend to be someone different. When it’s well written, a juicy undercover assignment feels like a fun task for Kensi and Deeks to tackle, and like a breath of fresh air for Eric Christian Olsen and Daniela Ruah to play. We can’t help but enjoy it.

This is a Densi discussion (Deeks’ undercover roles will come in a few weeks). So I didn’t consider Max Gentry, or even Matthew Dunkler from “The Livelong Day,” since they were much more about the character Deeks played than anything Kensi might have contributed to those assignments.

I most enjoy the undercover operations where Deeks and Kensi need to act like different people and not just wear different clothes, which is at least somewhat reflected in my selections. And I’d have to say, for a series that’s run as long as NCIS:LA, there haven’t been nearly as many of these as I might have expected or hoped. Still, I had no trouble coming up with my Top 3. In reverse order of importance, The Top 3 Densi Undercover Roles are…

This assignment makes the list not so much for the exciting roles as for the infamous nickname that Deeks bestows on Kensi. It’s their first real assignment working together, and they’re just getting to know one another. Kensi wonders how much Deeks is really like his “playa” alias Tim, while Deeks sticks Kensi with an alias that she hates. Well, she hates it here, but we know she’s grown to love it. And that’s what makes this scene special.

I was tempted by the manager and singer at the spa in “Anonymous” and by the Brazilian model and her English friend in “Lone Wolf,” but I chose Christopher Stone and Darcy from “Exit Strategy” as my #2 choice. All three are highly entertaining, but I felt that in the two runners-up, Deeks is the driving force behind the roleplaying. He does most of the talking and Kensi is forced to follow his lead. With Christopher and Darcy, they are working together, and that teamwork is pretty spectacular. Deeks is a nightmare boss and Kensi plays his beleaguered secretary perfectly. Both are playing nearly the opposite of their true selves, which adds to the interest. But what I loved most is how seamlessly they work together, making the whole thing up as they go along.

They may not be playing exaggerated characters, but watching Kensi and Deeks pretend to be married for nearly the entire length of a witty episode like “Neighborhood Watch” is definitely a highlight for me. Seeing them grapple with being so close to each other, having to confront (ever so slightly anyway) feelings they’re both trying to deny, and maybe getting to see a preview of what life could be like for them way in the future, was fascinating. Watching Kensi put her hands all over Deeks in public, using the excuse of being married to do it, was satisfying. The undercover kiss gave us all something to swoon over and discuss. And the whole “what was she wearing when you first met” talk, wow. They both succeeded in maintaining their cover as they based their fake story in true events, but I don’t think either had to fake the feelings evident in that scene.

I was quite surprised to realize that none of my Top 3, and few of my semi-finalists, were delivered by the writers we think of when we think of NCIS:LA. I’d love for Christina M. Kim to come back (from working on Blindspot) and give us some more fabulous Densi undercovers. I wonder why the main writers aren’t able to deliver this particular element more regularly? Too often we get Deeks and Kensi wearing different clothes without having to act like different people, which I always find unsatisfying and a wasted opportunity.

Still, there are many undercover Densi highlights. Among those I considered:

Next week we’ll move away from Deeks and Kensi to talk about Deeks and another important woman in his life, Hetty. What are The Top 3 Deeks and Hetty Conversations?

In the meantime, tell us your Top 3 Densi Undercover Roles! Which ones did I miss? What did you rate the best? Tell us why or just name your Top 3 in the Comments below.