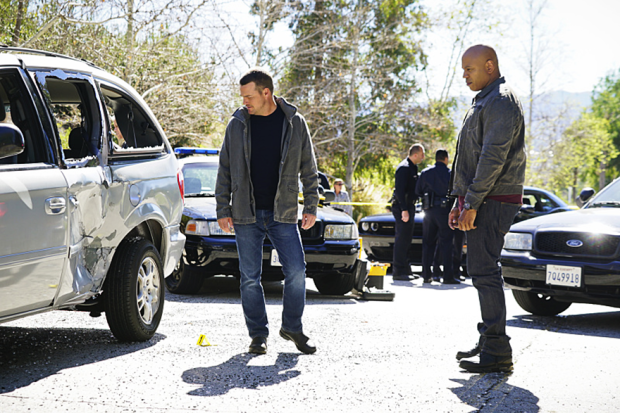 “Head of the Snake” – After Operational Psychologist Nate Getz (Peter Cambor) fails to check in with Hetty while working undercover on a mission linking organized crime to terrorism, the team learns he is working with an infamous crime leader, on NCIS: LOS ANGELES, Monday, April 11 (9:59-11:00 PM, ET/PT), on the CBS Television Network. Written by: Joseph C. Wilson | Directed by: Robert Florio

The long-lost Operational Psychologist returns. It’s been more than a year and a half since we last saw Nate Getz. The most recent visit centered on Nell’s handling of her first kill shot in “The Third Choir” (S6E4). How’s he been spending his time since then? Where’s he been geographically located? And don’t say The Republic of None of Your Damn Business, Hetty!

The press release tells us he’s doing some bidding for Hetty, but has fallen off the radar. Is this another instance of an agent going rogue or simply a necessary effort to maintain his cover? Speaking of cover, we can only hope his undercover tradecraft has improved since posing as Hetty’s son in “Paper Soldiers” (S4E13)!

As the team expectedly works to aid the towering doc, do they inadvertently insert themselves where they don’t belong? Does Nate honestly need back-up efforts or has he “got this”? How much does the team even know about the op before taking action? Did Nate’s actions purposefully prompt OSP to track him down, presumably for help?

By now we have learned – & the team should have as well – to question whether they know all they should. Is Hetty yet again withholding key information? Details that unnecessarily put the team in (greater) danger?

On that note, if Nate’s “got this”, he’s chosen either a very creative direction or has decided to employ a strategic scheme. Or perhaps he’s being forced to put his colleague in peril? Strike that – colleagueS. Seriously? Nate’s now part of a gang holding Callen AND Sam at gunpoint? What. Is. Going. On?!

What could possibly cause the calm, thoughtful social scientist to take such actions as holding Callen hostage?! And the team leader isn’t simply just being held captive, no, it appears he’s about to be victim to waterboarding?! If anyone would be aware of the physical and mental trauma of such an reprehensible act, it should be the team’s operational psychologist.

Either Nate better have a justified explanation or the agent might find himself tumbling through the trap door in Interrogation! Which side do you think Nate’s playing on? Could he actually be a traitor?

Deeks’ Week: Well, it seems the poor detective might starve this week? Leftovers? Of what? Could Kensi be practicing her skills as a late night culinary cat burglar? But honestly, isn’t Deeks smarter than this? They share driving the SUV, a house, sparring mouthguards, and so (SO) many more things. Knowing his forever famished princess, was any food (ok maybe the healthy stuff) safe in their cohabitation? Our Densi appetite will likely have to wait until the closing scene to learn how their banterous verbal brawl broils toward closure!