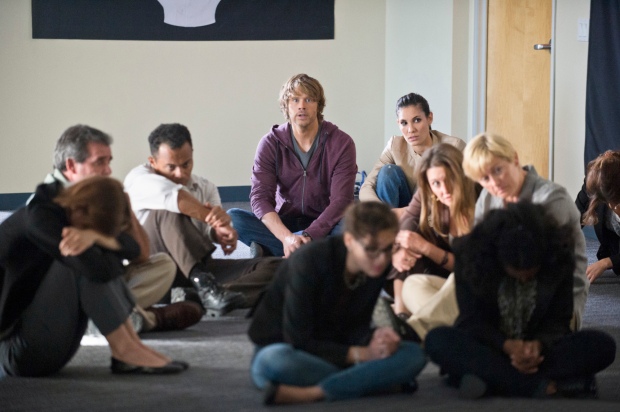 What is CBS telling us:  “Spiral” – While Callen is undercover in the mail room of an office building to investigate an arms dealer, it is taken over by terrorists and Callen becomes a hostage. When the team arrives to help, they discover the entire building is wired with explosives, on NCIS: LOS ANGELES, Monday, Jan. 5 (9:59-11:00 PM, ET/PT) on the CBS Television Network.”

What we think is happening:

The episode looks to be a Callen-centric homage to “Die Hard” – a fun Christmas movie and something that would certainly work with the NCIS: Los Angeles skill set:  terrorists taking hostages, action, explosions and humor.  Those elements are all firmly in NCIS: Los Angeles‘s wheelhouse.

“Spiral” is written by Dave Kalstein, who does a great job with action episodes.  The question may be, which Dave Kalstein shows up when it comes to Deeks and Kensi.   Will this be the man who wrote some of the best early Densi episodes in “Plan B” or “The Debt” or “Blye, K.” Part Two or the man who wrote the punch in anger and raccoons as relationship guides in season five?  Since season six is moving a wonderful direction, root for the positive.

It also should be noted that this episode was shot before “Humbug” (though my guess is that had more to do with the ice rink probably not being available for production in early November in 90 degree Los Angeles weather).  How much of “all in” we’re going to see should be interesting.

Who is dropping by:

(That is not the name of his “Cyber Threat” character (where he was internet billionaire and absentee father Dennis Calder).  Hmmmmmm.)

“Empty Quiver” may be the perfect episode to show someone you want to introduce to the show.  Everyone is on the top of their game in that episode.  Everyone has an area of expertise.  Everyone can add something to make the team work better.

Yes, the people with DoD training had to teach the poor local LEO Deeks, and by extension the audience, what “empty quiver” meant but Deeks was far better in the bikini bar interview of the bartender (and explaining what a bikini bar is to those of us who live in cites without them) than Kensi was.  Sam knew about radiation, both how to mask it with bananas and the damage it would do.  Callen ran a great undercover operation and an equally strong takedown of Justin Marchetti.  Hetty was watching out for the team and their careers.  Nell and Eric worked well with everyone, even breaking the internet to help save the day.

Directed “Kill House”, “Omni”, “Unwritten Rule” and “Deep Trouble” Part One.  Teng just joined Graceland for their third season as a producer/director (he directed an episode last year).  He directed the 100th episode of Hawaii Five-0 a few weeks ago and last season’s 200th episode of Criminal Minds.  He seems to be the big round number episode go-to-guy for CBS.

Larry Teng: Deeks being The Man… 16 stories high with all of #CAA looking on. @ericcolsen #ncisla

That was going on while Deeks was hanging out the window.  Still doesn’t look safe.
From Daniela Ruah’s Instagram account:

Deeks looks fetching in his sleeveless workout shirt as Kensi meditates to find a less stressful way to solve her problems.  Just as Kensi has Deeks flat on his back, and not in a fun way, – tell me if you’ve heard this before – Nell interrupts.

You can read more by Tess DiCorsi by going to : http://archiveofourown.org/users/Tess_DiCorsi