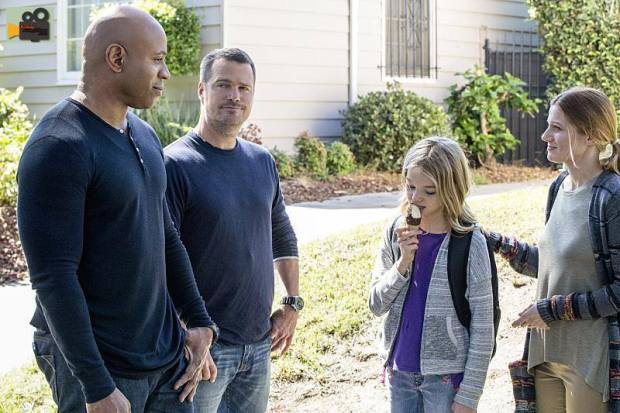 In my mind Joe Sachs may never live down writing two of my least favorite NCIS: Los Angeles episodes (“Drive” and “Blaze of Glory”), but with this week’s “Parallel Resistors” he fared pretty well. With solid support from director Eric Laneuville, we got a twisty whodunit with an excellent Action!Deeks and encouraging Densi developments.

The Case of the Week

While the whodunit was fine, did I follow all the details of the case? No. There was a lot of techno-speak that I didn’t bother trying to keep up with. Plus, I think I’ve developed a bad attitude about Nell and drones because I kind of tuned out during that scene on the field (I think this attitude comes from a previous drone-related case that occurred in the midst of a run of Super Nell episodes).

I did enjoy the multi-ethnic casting of the students, the adorably spunky young genius, and a good amount of humor throughout. Although to me, the usual Sam-Callen banter sounded a bit less, well, bantery, but the tradeoff was an increase in heart, with the continuing discussion about missing moments of Sam’s daughter’s life. That’s a tradeoff I could get used to. I did love Callen’s passionate defense of ice cream (it does bring happiness!), and I enjoyed this little moment of Deeks and Callen worrying about Kamran’s schooling choices:

Deeks: Just to clarify, you’re sending your daughter off to boarding school.
Sam: I’m not sending her, it’s what she wants.
Callen: Yeah but at 12?
Deeks: Kids need a supportive family.
Sam: They do. Or else they’ll end up like you two knuckleheads.
Callen: Ouch.
Deeks: Double ouch, painful, low blow.

Things were definitely looking up for Densi this week. First we got a Deeks who’d just enjoyed a luxurious 12 hours of sleep at home, and we could see the impact on his mood. He was positively overflowing with wisecracks (I one time made a potato clock, for example). I didn’t realize how much I had been missing Joking Deeks.

For her part, Kensi seems to have turned a corner with help from a new frenemy, another patient named Sullivan. His competitiveness is just what Kensi needed, someone to give her driven, feisty self the motivation to stop feeling sorry for herself and start working towards a goal. Sullivan is pretty perceptive, predicting Deeks would be “some sort of a cross between a beach boy surfer and a terrier.” Well played Mr. Sullivan, although I’d say Deeks is at least as “manly” as he is “cute.” But watch it- Deeks is the only one who gets to bestow nicknames on Kensi! Oh, and who’s referring to their “fiancé” now? Loved it!

We also got an apology from Kensi for the way she’s been treating Deeks, and while of course he pushed it off as unnecessary, I liked that Kensi seems to be gaining that perspective she seemed to be missing, an understanding how her plight and her reactions to it have affected those around her. Unlike Deeks, I felt the apology was appropriate and I wish he had just accepted it, but I think his reaction shows his low expectations for himself in this or any relationship. Plus he’s still trying to be Kensi’s cheerleader whenever possible, so reassuring her that her actions haven’t been hurtful would be his natural inclination.

I loved the moment when Kensi asked to see the ring again- so sweet and playful. How wonderful was it to see her teasing him- the first real glimpse of classic Densi banter since she’s been awake. Plus, the way they looked at each other simply melted my heart.

Kensi: I don’t want to see it again until I get outta here- I need something to look forward to. So, actually, promise me that even if I beg, you will not let me see it again.
Deeks: OK, sounds like a plan. I like it. Going away… putting it away…
Kensi: OK wait, just one more time.
Deeks: Yeah well it’s too late.
Kensi: Just one more time!
Deeks: It’s too late.
Kensi: Please!
Deeks: OK but this is the last time.
Kensi: What did you just agree to? I said, ‘promise me you will not show it to me even if I beg.’ What are you doing?
Deeks: You’re so crazy.
Kensi: At least I can keep a promise.
Deeks: Touché.

Yes, a “touché”! I’ve missed these two!  I think all these post-Syria Densi scenes have been helped a great deal by having a single writer (R. Scott Gemmill) at the helm. It makes it easier to trust that Densi will end up in a good place, and that we won’t get any random deviations in characterization along the way.

I did find Deeks’ mention that Kensi has six months of physical therapy in her future interesting. I’ve been assuming that she would be back to work (i.e., fully recovered) by January. I guess we’ll have to wait and see exactly when and how they bring her back to fieldwork. That return to the field could bring its own share of drama. How can Deeks possibly not freak out seeing Kensi in danger after nearly losing her? Can they go back to their partnership as it was before, or will this experience change each of them in some way that will make additional adjustments necessary?

Nell and Deeks worked very well together in the field, and we got a nice action sequence for Deeks- on a motorbike! Let’s all take a moment to reminisce about that horrible time when Hetty took away the most beautiful motorcycle in all the world in an effort to keep post-Sidarov Deeks from hurting himself. While I appreciated the sentiment, I really really wanted to see more of Deeks on that bike. Here we got it. It may not have been a high speed chase, but we definitely got Eric Christian Olsen riding in a few shots, and going down at least a few stairs (unless they went to the trouble of digitally placing his face onto the stunt double?). For not the first time in the last two seasons, it felt like a little gift from Mr. Gemmill to the fans – if that’s the case, then Thank You!

Come back later in the week for new entries in Deeks’ Surf Log and Kensi’s Journal, plus the Drabble and Edit of the Week. This weekend we’ll have a new Classified Preview and a new Top 3 featuring Action!Deeks. Hmmm, Biker Deeks may need to be added into the mix…

In the meantime, what did you think of “Parallel Resistors”? Are you satisfied with Kensi’s apology? Are you as happy as I was to see the lighthearted Densi banter?