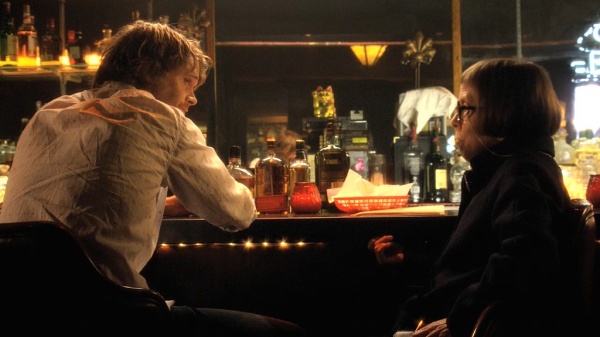 On April 6, 2010 our fangirl hearts found a new beat when appearing on our screens for the first time was a tall, blond shaggy detective. He became the basic, indispensable and very necessary element of our fangirl lives – Detective Marty Deeks, LAPD.

Until this episode, I will be honest, I was not a regular watcher of the show. I had seen enough procedurals and this one did not have anything that I had not seen before. But when Special Agent Kensi Blye as Tracy looked down the line of the Blood and Guts Warriors, seeing one military squared away guy after the other, and then came upon this “rag-a-muffin” at the far end wearing a “white tee shirt, red shorts, black socks”, she became “stuck, smitten, whatever” on Jason Wyler. And so did we!

I liked how the writers started Deeks with an antagonistic attitude towards Kensi. He wasn’t buying what she was trying to sell and Kensi knew it. Her gut was telling her something about Wyler, she just wasn’t sure what “it” was. And Jason Wyler wasn’t about to help her.

When they meet again, this time at Zuna’s house, it feels like someone cranked the heater up to a thousand degrees. The dance they do around each other is awesome. Both keeping their cards very close to the vest. [Hetty being well versed in that would approve.] Kensi would play a card – Internet photos. Deeks comes back with, “except he said your name was Kate.” Kensi tries to sell a drug buy hoping Wyler is the dealer while cozying up to him. An iconic moment that has been memorialized in video mashups, fan fiction, fan site avatars and backdrops. The moment Deeks and Kensi stand face to face was the first moment of the storm that was to become Densi.

Wyler counters with wanting to search Kensi’s pockets. Fortunately for Tracy, Callen shows up as a cab driver to get her out. The lightening bolt that bounced off of those two when Deeks “bumps” past Kensi was electric! For the record, my pockets are always full, ready for inspection. Kensi will get her chance to search Deeks’ pockets in “Driving Miss Diaz” and the giggle she elicits from him is one of my favorite sounds along with “oh girl” from “Cancel Christmas”.

When the team [actually Eric Beale] finds out Jason Wyler doesn’t exist – not even a library card- it causes major concern with the team, and his picture joins the others on the suspect wall. Kensi is still chirping about Wyler, he being hinky, she being “stuck, smitten, whatever!” Not even heavy handed mojitos from the S&M neighbors in “Neighborhood Watch” will shake her first memory of Marty Deeks.

The things you do for your job

Deeks has to be thinking what the hell he had gotten himself into when Sam Hanna climbs into the ring with him, both men fighting for a spot with the Warriors. Deeks desperately trying to hold on after all the hard work. Sam just wanting to get this “annoyance” out of their way. Sam eventually wins the fight in the ring, he just didn’t know that a war had begun. It would be a “war” that would span the next four years between them.

Deeks surprises Sam in the alleyway and tries to buy Sam’s spot with the Warriors. When that doesn’t work, a fight breaks out and LAPD magically appears on scene. Kensi is freaking out as is the rest of the team in Ops. Hetty is going after someone’s head at Parker Center.

Deeks is in a jail cell – no singing this time. At least he has company, albeit unpleasant, in the form of Sam Hanna. Sam can be a bully and this will not be the only time it is directed at Deeks. It would usually be subtle until it wasn’t – in “Descent”. Deeks to his credit has never taken any of his crap. He ignores Sam here, tries to deflect in “Empty Quiver” when Sam put him down for his looks in response to why Deeks could not join him and Callen in the undercover op with CHP. But finally Deeks tells him off in “Descent”, which had me cheering. But Deeks, being the guy who always has the team’s back, rescues Sam and gets tortured for his trouble. And it was only after he goes through that ordeal that Sam acknowledges him as a good cop. Sam would continue to “tease” not only Deeks but Deeks and Kensi as a couple in the future. I disclose now, I have never been a Sam Hanna fan but understand his purpose on the team. Please make sure to address your hate mail properly.

“Ain’t that a kick in the head!” Well the cat’s out of the bag! And as his prize, Marty Deeks gets an all expenses paid trip to the NCIS boatshed where he is treated to the three stone faces of Agents Callen, Hanna and Blye. And Marty, they don’t validate parking, or at least that is what you will tell the FBI down the road in “Archangel”.

Deeks finally gets Kensi to talk, banter actually, and it is the start of their give and take with each other in one of my favorite exchanges [see below]. Now in all fairness, the team is still reeling from Dom’s disappearance. But there is still no excuse for the way Deeks is treated. It will be a recurring theme going forward. I would also like to state that the writers were very inconsistent in how they wrote Deeks the first few seasons. They had this gem of a character and for the first few episodes he was very strong but for reasons known only to Shane Brennan, they changed how Deeks was scripted. They had us on a roller coaster that was not all that enjoyable. Fortunately, this past season saw a strong Deeks return. Hoping for the same in Season 8.

The team, with Deeks’ help, solves Zuna’s and Mangold’s murders. Callen actually has some nice things to say about Deeks; Sam, not so much. I wish Callen had been stronger in his support of Deeks over the years but he would never disagree publicly with Sam. And even though he questions Hetty’s reasoning for bringing Deeks on in “Fame”, he seems supportive. He was not so supportive when Deeks came back to work in “Impact,” questioning his readiness – never questioned Sam’s. Then in “Internal Affairs” Callen attacked Hetty for bringing him on the team. I blame Sam’s influence.

There’s no place to go but up!

How do you describe an essential episode that was basically the first episode ever that Marty Deeks appeared in? Granted hindsight is always clear, but watching it again for this assignment, you realize that if Deeks was a one-shot guest, he had quite an impact on the episode. You would want to see him again, maybe become a regular. Credit Eric Christian Olsen’s acting skills for making a character believable and with depth. You start out not sure about him but end up cheering when he comes in to save Sam. Yeah, he keeps saving Sam and Sam keeps disrespecting him.

The chemistry between Deeks and Hetty is wonderful. Sadly, Hetty, like Deeks suffered from inconsistent writing. But there were gems between them both here and in “Human Traffic.” Deeks would play the underdog for most of his time at OSP. It wasn’t until the Siderov arc did the team see what a tough, honorable man he was. Kensi knew it but couldn’t communicate it, but she and he would eventually learn how to communicate with each other.

As for the rest of the team, I miss Nate; he and Deeks proved to be quite good together in “Impact” and “Tuhon”. Deeks also is good with Eric, “Zero Days”, another episode that had a playful scene in a jail cell that produced a laugh that I could play in a loop all day. Once Nell joined the team, the brother/sister playfulness and the protectiveness he would have for her as he continually displays for females he cares about appears. Which says a lot about him as team player and as an undercover operative with the ability to weave in and out of situations. Which is why it is still surprising, even now, that an elite team of undercover operatives did not or would not see the gem they had in Deeks when he first joined the team. But I’m preaching to the choir.

This first essential Deeks episode gave us the gift that keeps on giving, Marty Deeks. When written well, the layers of this character are addicting. Even when not written well, ECO is able to give our Deeks what he needs every episode to keep us coming back. And we will in Season 8.

At Davis’ house.
Deeks: So your place or mine?
Kensi: We can manage okay.
Deeks: Oh come on Callen, at least let me hear his story.
Callen: We’ll take it from here.
Kensi: Thanks Deeks for everything!
Deeks: What? No hug?

From the initial boatshed meeting.
Deeks: And you…well first I wasn’t sure about you but those Internet photos really sold me. So riddle me this, did you plan that or maybe, maybe that happened in real life?
Kensi: Crashing in the spare bedroom, is that the best you could do? You are lucky I didn’t shoot you.
Deeks: I was vamping.

At the bar at the end of this episode and where Deeks will go to meet Hetty for help during “Human Traffic”
Hetty: Detective Deeks?
Deeks: Hetty, who doesn’t have a last name.
Hetty: Lange, Hetty Lange.
Deeks: Can I get you anything Ms. Lange?
Hetty: I’ve already had tea thank you. And it’s Miss and I prefer Hetty.
Deeks: Hetty, it is!
Hetty: I imagine you are still smarting from where the Chief of Police just ripped you a new one.
Deeks: How did you know that?
Hetty: Because I just experienced something similar from my Director. It seems we need to coordinate our operations a little better. My boss wants to assign a liaison officer from LAPD and your boss thinks it’s a good idea.
Deeks: You guys don’t need a liaison officer.
Hetty: I agree. I told him we already have one. [Hetty slides the folder to Deeks. I love how his eyes never leave her face.]
Deeks: Who are you guys? I mean, how did you get all of this information? The only thing missing here is… [And the stare down between Deeks and Hetty as she hands him the pen with Deeks slight smile is epic!]
Hetty: No need to date it.