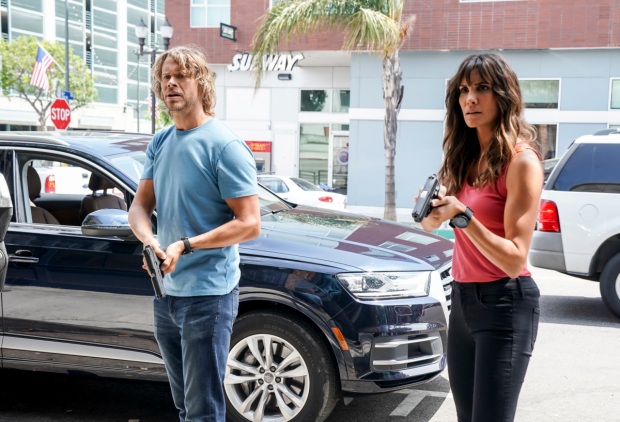 Cute seemed to be the adjective to describe all the Densi interactions this week. They were adorable in the opening wedding cake scene, with the two in a playful mood that’s been largely missing from their interactions. Even if Kensi seems a bit out of character intense about the whole thing, the dynamic between them still felt tension-free. Deeks coming clean with the truth that the cake doesn’t really matter gave the scene a bit more comedy but it also struck at the truth, which hopefully these two will [eventually] get to, that none of these elaborate plans matter. It looks like we may have to wait another couple of months for that to happen. I shall attempt to remain patient.

The duo was pretty adorable sneaking around the mission to read lips (Kensi has great vision- I’d have needed binoculars!), messing with Sabatino, bantering about bones of contention, and looking amazing running down the suspect in the alley. I also liked Deeks “forgetting” he’s a lawyer, as well as his nice frisbee skills. I wonder how many takes that shot took? And did Eric Christian Olsen save the stuntwoman from landing on her head? It looked like she was close to a really bad landing.

Let me first refer you back to last week’s rant, which was about the many reasons Mosley is never going to be a likeable character and why she should be out of a job and off the show. I could/should stop there, but when have I ever been that concise?

The whole DOJ-special-prosecutor-coming-in-to-investigate-the-entire-team storyline makes for a major case of déjà vu. I believe we’ve seen this scenario play out at least two(?) other times, right down to having said investigator set up shop in the gym. It was painful to watch Eric questioned; the whole time I kept worrying that he really needed his own attorney before he said something that could get him sent to prison. Gemmill’s desire to treat the investigation for laughs here didn’t sit well with me. Eric (and the rest of the team) should be angry about Mexico and afraid of the possible consequences.

The tone at least felt more appropriate in the final scene with Sam and Mosley, where he admonished her to make things right. Seeing her feel sorry for herself over trying to reconnect with her son, after all the trouble/death she caused, didn’t make her any more likeable though. Sam was way too patient and understanding if you ask me. (And I’m just being paranoid, right, by thinking that they might be trying to steer these two characters together? Please tell me I’m just delusional, please?)

Because of Mosley, the entire team is now at risk and will be for the foreseeable future, yet again she expresses no regret or even acknowledgment of their plight. Of course, she looks to be taking her lawyer’s advice and is only out for herself. Please show, please tell me this is all leading to seeing her get her comeuppance, either by being fired, going to jail, or at least leaving for witness protection.

One more piece to this rant and then I’ll stop… Are we just to assume that Mosley has already apologized to the team, expressed her tremendous regret over the loss of Hidoko and all that the rest suffered, and then hired Deeks back? The show clearly wants to get the season off to a quick start so has decided to gloss over any and all conversations about Mexico that don’t involve special prosecutors, but it’s really frustrating to miss out on such important talks and to not even be sure whether they’ve happened. Would it be too hard to drop a few allusions to previous discussions?

So Gemmill’s dramatic elements let me down, but he and Pot more than made up for it in comedy and action. The episode was so chock full of funny lines that I found myself watching with a smile on my face. This was the funniest episode in a long time. The amusing moments flew by at a steady pace from nearly every character, including…

The action was great too. The opening scene had me wondering if Frank Military might have written the episode, what with the creepy bad guy chilling in the pool next to the dead bodies, and then looking to take out a little girl selling lemonade. What? Whoa. It was an attention-grabbing and uniquely unsettling opening, even compared to all the other grisly versions we’ve seen.

Also of note was the funny scene where Sam found himself taking on a bunch of good Samaritans in the gym. And the scene at the house where the team took out the hit people (is that the correct term?) was beautifully directed. I loved how menacing the initial conversation felt, only to turn downright frightening as soon as Sam and Callen entered the house and we saw how well armed the whole group was. Watching the team work in near silence to take out the bad guys upped the suspense even more. But what was up with the room full of knives? Again it felt downright Militaryesque. That’s not a bad thing at all, just a little unexpected.

What did you think of “Hit List”? Am I too hard on Mosley? Is anyone out there actually shipping her and Sam? Did you laugh as much as I did at all the funny lines? Tell us your thoughts in the Comments below!