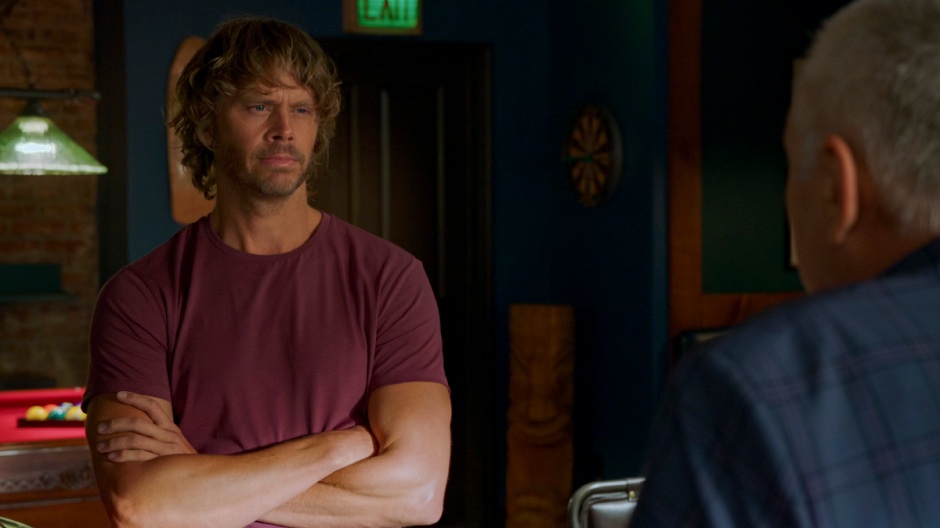 This week’s NCIS: Los Angeles episode, “The Bear,” ushered Season 12 in with (most of) the characters we love, some new recruits, and everyone’s favorite guest actor. Writer R. Scott Gemmill and director Dennis Smith managed to retain the show’s key elements – banter and booms – even as they made adjustments to keep cast and crew safe amidst the COVID-19 pandemic.

A Year Unlike Any Other

2020 has been a year unlike any other, and I hope you and your loved ones have all been staying safe. The COVID-19 pandemic shortened filming at the end of Season 11, and it’s already shortened the planned length of the new season. In addition, the showrunners are making efforts to keep their actors socially distanced as much as possible. What a challenge for the writers and directors! It may be some time before we get the whole team hanging out in the bullpen together, and indoor hand to hand fights with bad guys may be few and far between.

For me, the biggest missing character last night wasn’t Hetty or Beale, but the city of Los Angeles. You all know by now how much I love all the location shooting the show does, whether it’s famous landmarks from the Hollywood Bowl to Venice Beach, or grittier spots like the port. The show celebrates the city in a way I’ve rarely seen on television.

So although the team finally escaped the mission, boathouse and bar to get out in the field, a lot of the filming was likely still done on the Paramount Lot. I’m talking about Sam and Callen in their green screen helicopter and Rountree on his surveillance outing (his targets did look to be out on the streets, we just never established that Caleb Castille was there with them). It gave the episode a quieter feel (was the music quieter than usual too?) and the first third actually reminded me of “Answers” in its focus on small groups of characters filmed on the show’s sets.

The show’s on location shooting has always provided a certain amount of extra energy that I missed here. It wasn’t the showrunners’ fault. In fact, I think they handled the whole situation with creativity and resourcefulness. And it’s a challenge that most shows that are filmed almost completely on studio lots don’t even have to contend with.

I also appreciated the deftness with which they handled a large time jump (although sadly, not large enough to produce a Densi baby). We learned a lot about what’s been going on with the team during this time. How sad that Nell and Eric have been so apart, although that will no doubt lead to lots of adorably awkward conversations once Beale returns.

The Banter and the Booms

The episode still managed to give us some action, even if it was largely confined to the last half. They kept the main duos together, rather than breaking them up to keep an eye on the junior agents, which provided a reassuring familiarity to most scenes. Listening to Sam and Callen banter/bicker over their respective roles in managing the plane situation brought a smile to my face. And hearing them declaring their love for one another, even if said in jest, still carried the weight of 11 years of having each others’ back.

We also got some nice Deeks and Densi moments, including a cute opening conversation about counterfeit bills. Again I was grateful that these two seem to be filming together. The highlights involved appearances from three of our favorite recurring characters: Arkady Kolcheck, Homeless Deeks and Artie. Let’s start with Arkady. The second he walked through the door of the Squid and Dagger, the energy level rose, and silliness followed. Vyto Ruginis brings such charm to his role that I wish they could find a way to make him a series regular. It’s a promising sign that he clearly knows the way to the boathouse and the bar (and has he been to the mission too?), so he can pop up any time. 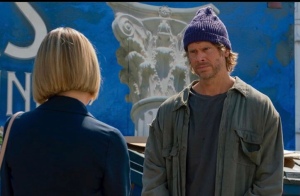 The second nice surprise was an appearance by Homeless Deeks and Artie. Eric Christian Olsen played his undercover role perfectly, managing to generate a lot of humor (“Kelly Clarkson!” “Randy Travis!”). Seeing the grin on Kensi’s face as she listened in to Deeks’ antics from her car took me right back to “The Job,” when he cheered her up by pretending to be a soccer player hit by a car.

Seeing Deeks harass Rountree was also very funny, although a little pot calling the kettle when it comes to fancy coffees. I do love the way Rountree so easily laughs at Deeks’ jokes. He did so last season and it’s great to see that dynamic continuing. The others are always so reluctant to give Deeks credit for his humor and are more likely to feign annoyance and roll their eyes. These two are developing an easygoing relationship and I look forward to seeing how it evolves. I’d love to see Deeks becoming Rountree’s principal mentor, especially given their initial outing together last season where Deeks blamed himself for Rountree’s near-death (but opening credits-worthy) experience.

As funny as ECO was, we here at wikiDeeks are using his appearance for serious purposes. We’ve pledged $150 to support Pets of the Homeless each time Homeless Deeks appears on the show, and $100 to support Every Day Action, an organization that distributes leftover food from film sets, restaurants and grocery stores to underprivileged and homeless communities. Our latest donations have been made and we invite you, if you’re able, to join us in supporting these wonderful causes.

We also got a very large boom, although it appeared to be the product of the CGI department, not the explosives experts. Still, all in all I enjoyed seeing the gang back in action. They maintained a great balance between the respective team members, and the characters thankfully are not in a pandemic world where everyone has to wear masks.

The season may be shorter than normal, but there’s still plenty to come, and for that, I’m grateful. Let us know what you thought of “The Bear” in the Comments below.