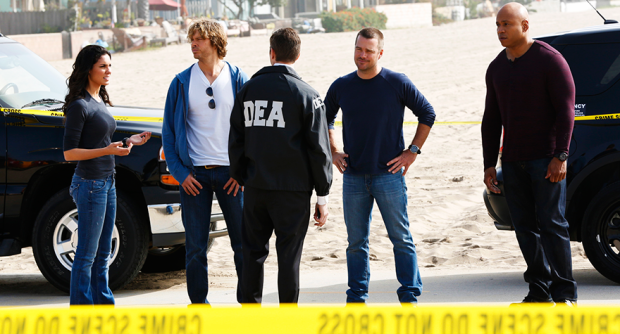 What CBS is telling us: “Savoir Faire” – While the team investigates the death of one of three Afghanistan soldiers who are training in the U.S., they discover two other soldiers are missing and must find them before they’re forced to reveal classified military operations to their captors. Also, Sam is back to work but his team worries it may be too soon, and Callen realizes he has very little in common with his partner, on NCIS: LOS ANGELES, Monday, March 9 (10:00-11:00 PM, ET/PT) on the CBS Television Network.

What we think is happening: Sam’s return will probably be a bit limited since LL Cool J missed a few days of filming for his Grammy duties. This episode had limited social media exposure – a few set photos but not much. Previews make this look like a team heavy episode. “Savoir Faire” is a good term for what the team does in weekly cases: “the ability to behave in a correct and confident way in different situations.” It was also the name of the thief in the Klondike Kat animated series in the 1960’s (“Savoir Faire is everywhere!”).

Be on the lookout:  GUEST CAST

A huge thank you to the fantastic crew and brilliant cast of @NCISLA_CBS for having me. @DanielaRuah @llcoolj @chrisodonnell @ericcolsen 👊👍

Good times with this guy. A gentleman and a scholar…and funny as hell! 'Twas a pleasure @llcoolj #NCISLA #jayleno pic.twitter.com/I2EXTS5uim

Rebecca Metz as Lady
Melinda on Shameless and has a number of credits on a wide assortment of TV dramas (ER, Nip/Tuck, Angel, Justified, Person of Interest, etc.).

Jamison Haase as DEA Agent Leo Brenner
Plays TAO Barker on The Last Ship and appeared in episodes of Bones, Castle, Vegas, 24, Mad Men, Prison Break, Two and a Half Men, Las Vegas, Cold Case and Without A Trace. Had an unaccredited appearance as Will in the “SWAK” episode of NCIS (Tony gets the plague).

Tonja Kahlens as DEA Agent Lindley Richards
Was the widow of the dead Marine recruiter in NCIS’s “Recruited” episode (with Bob Newhart as Ducky’s mentor) and has appeared in a number of procedurals/dramas.

Mershad Torabi as Runner
A number of credits in independent projects.

Karthik Srinivasan as Abdul Farman
Small roles in a variety of movies and television series.

Mehdi Merali as Fahad Ahmadi
Merali is an actor/stunt performer with credits as varied as How to Get Away With Murder to New Girl.

And that's a wrap on NCIS: Los Angeles! #boomshakalaka

DIRECTED BY: Eric Laneuville
Previous NCISLA directing credits include “Partners”, “Purity” and “Allegiance”. If you are of a certain age, and I am, Eric Laneuville may be familiar to you as an actor. Laneuville played Luther, the orderly turned EMT on St. Elsewhere (where Mark Harmon was a regular for a number of seasons) and if you are really of a certain age, he was high school student Larry on Room 222.

Insider Intel: None this week. 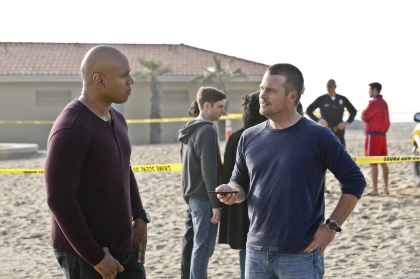 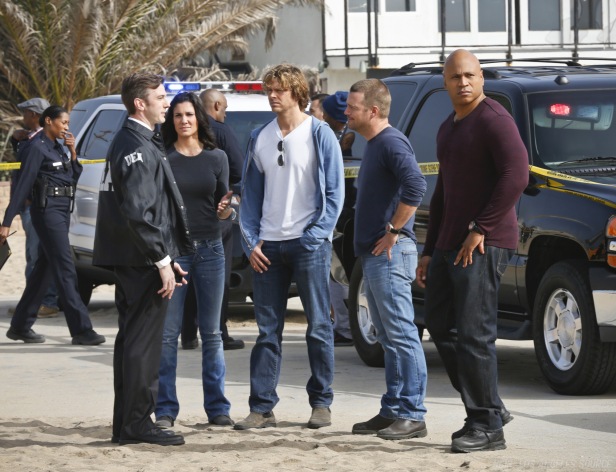 Rebecca Metz took a photo with Daniela Ruah and Eric Christian Olsen and shared it on her twitter feed:

Daniela Ruah watches a stunt (guessing Kensi and Deeks will be involved):

@jacqniv, the Twitter account of the program’s staff photographer, usually has some exciting behind the scenes photos posted the day of the episode (especially if there are explosions).

Everyone, including a just off the injured reserved list Sam, is in the preview. Is Deeks standing near Kensi in the bullpen because he’s lonely in the Samless side? And isn’t Eric a surfer? That qualifies as a beach body. The preview has a lot of running, jumping, shooting and action as well as a case that seems to have a hard deadline. Another team-oriented hour.

On the beach, the bromance is going strong, despite Sam’s time away. Kensi and Deeks look like they found the DEA Agent absent in Sneak Peek #2 (sneak peeks are not in chronological order, again).

Deeks gives a nice pat on the back to a fellow member of the LAPD as the team enters a Malibu beach crime scene. While Callen and Sam banter in front of Kensi and Deeks, an unhelpful DEA Agent can’t find the DEA Agent Richards, the agent in charge. Callen tasks Kensi and Deeks with finding Richards.

Tess DiCorsi is a wikiDeeks contributor.  You can read more by Tess HERE.