The Russian saga continued on this week’s episode of NCIS: Los Angeles. “Red Rover, Red Rover,” written by Andrew Bartels and directed by Terrence O’Hara, delivered a nicely balanced episode filled with humor and angst, plus plenty of action.

The episode began with intensity as the team pushed to save Joelle and rushed to make sure Arkady was safe. At Arkady’s house, Deeks’ repeated warnings of “Easy” to his partner conveyed how seriously he took the situation and how dangerous it might be. O’Hara moved the entire episode at the perfect pace. There was lots of action and even an unexpected boom from the exploding van, but Bartels also gave us time to catch our breath with some serious (and silly) conversations. The whole episode felt like a suitable payoff for several weeks of set-up, even as there’s still more to come next week. It will be interesting to see how – or if – that episode finally ties all these plot threads together. 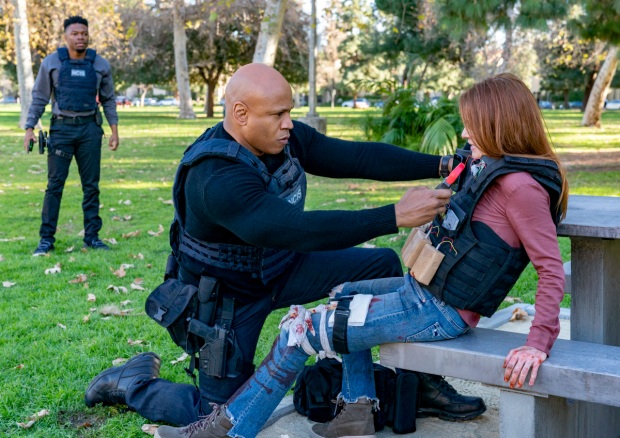 I don’t feel qualified to really comment on the Callen-centric storyline, or on whether Anna or Joelle are his destiny. Bartels worked hard to redeem Joelle. She began with slightly over the top snark to her captor that sounded as clichéd as the severed finger whose clichéd origins she herself noted. But later, her banter with Sam with a bomb strapped around her chest painted both characters in a positive light, with Joelle frustrated by Sam’s “insufferable” drive to be the hero and Sam refusing to give up on saving her.

Anna’s mysterious comments about Callen not knowing everything about her certainly leave lots of room to take her character in different directions. It sure doesn’t feel like the showrunners are quite ready to give Callen a happy ending in the romance department, and it almost felt as if they are setting up a love triangle. We’ll have to wait and see.

Arkady is king of the hill

With apologies to Kirkin, Arkady Kolcheck, played by Vito Ruginis, is everyone’s favorite Russian recurring character. Here he provided both a healthy dose of humor as well as a good case of angst, both via his talk with Deeks and Kensi. Before we address that amazing conversation, let’s also praise Deeks’ hilarious warning to his teammates storming the house that, “If Arkady pops out in full latex bondage gear you should probably avert your eyes because there’s some things that can’t be unseen.”

Bartels then gifted us with a topic of conversation some of us have longed to hear: evidence of a relationship of some sort between Roberta and Arkady. A year ago I proposed that Arkady could join my often-mentioned sitcom featuring Deeks, Kensi, and Roberta at the bar. Others have shared this desire to see these two characters together. Just check out Vyto’s Instagram feed from this week, where he reposted my wikiDeeks colleague Lyssa:

Indeed Vyto, #Kolcheeks forever. Roberta and Arkady together would be comedy gold, and it’s delightful to hear the show even hinting that we might someday witness such fun. I mean, Bertie would totally be happy sharing those cases of vodka in the panic room, right? Eric Christian Olsen played Deeks’ horror at the idea so well. Somehow he kept a straight face and made me believe that Deeks was about to pull his gun to protect his momma from Mr. Kolcheck. We’ve seen his over-protectiveness before, when preparing to meet one of Roberta’s new boyfriends. Its source, from Deeks’ traumatic childhood, gives that small moment resonance, even in a scene played for humor. 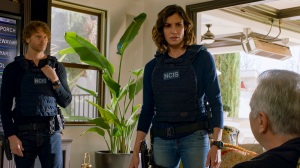 Deeks: I’m having flashbacks of trying to teach my mom how to Zoom.
Arkady: You taught her very well. She’s very good at it. Never forgets to unmute.
Deeks: I’m sorry, what did you just say? What did he just say? What am I hearing, you Zoom, you Zoom with my mom?
Arkady: What? I miss the bar. Human interaction, heavy pours and her sharp tongue. Thank goodness she had to cancel on me last night, although panic room is built for company.
Deeks: Oh my god, he said that out loud, I’m gonna kill him.
Kensi: Stop.
Deeks: I’m gonna shoot him, you’re kidding right? Tell me you’re kidding.

Once the horror and shock had worn off (or Kensi had at least succeeded in changing the subject), Deeks went ahead and promised Arkady that the team would keep his daughter safe. Didn’t you just know immediately that was a mistake? I flashed back to “Black Wind” where Deeks promised Alejandro he’d be reunited with his grandson.

Sure enough, by episode’s end, Deeks’ promise had been broken, and he felt terrible about it. ECO played this scene well too, showing us Deeks’ remorse and anger at the team’s failure. Of course, since this is Deeks we’re talking about, he was quick to take on the full blame himself. Moments like this show why Deeks would actually make a great team leader and I hope he gets a chance to play more of leadership role with the newbies.

Playing hide and seek with Kessler

The episode’s most important Densi scene occurred in the car outside of the mission, as Kensi expressed her desire to put an end to Kessler…

Deeks: You OK?
Kensi: Yeah.
Deeks: You’re not having a reaction to the injections?
Kensi: No. No, honestly I’m not… I was just thinking, uh, part of me doesn’t blame Anna for doing what she did.
Deeks: Partnering up with Russian operatives to kill a sociopath that wants her dead?
Kensi: Well either that, or spend her whole life looking over her shoulder wondering when everything’s gonna come crashing down.
Deeks: Right. Yeah, no, I…
Kensi: I hate to admit it but, uh, Kessler’s right. He’s in my head. There’s not a day that goes by that I don’t wonder if I should just drop everything and put an end to him.
Deeks: I’m in. [Of course- where Kensi goes, Deeks goes.]
Kensi: I was, I was only partly serious.
Deeks: Why? I mean, think about it. This guy has been hanging over our lives for months now. He said he wants to find you and to torture you but the truth is he doesn’t have to find you to torture you ‘cause he’s doing it right now…. I love you, and we’re trying to conceive, and you need your rest, and your body is constantly in fight or flight. So screw that and screw him. Let’s hunt him down and let’s drag him back to prison.
Kensi: I love you so much.
Deeks: I love you. You wanna go right now?
Kensi: [Laughs.]
Deeks: I’ll go with you right now.
Kensi: No. Well actually your plan has a little hiccup.
Deeks: What’s that hiccup, because I’ve thought this through?
Kensi: When it comes to dragging him back to prison… he’s been pardoned?
Deeks: Yeah I wasn’t actually talking about US prisons, I was talking about my friends in North Korea, they have prisons, and then Singapore-
Kensi: Yeah-
Deeks: -It’s pretty dingy there. And then Ozkaban.
Kensi: [corrects pronunciation] Azkaban.
Deeks: It may be fictional, but I feel like it-
Kensi: -Would be really bad?

This scene was so well done by everyone involved. First, the direction, with its handheld cameras in the backseat, gave the scene a lovely sense of intimacy. It was different from most car scenes that are shot head on from the front with cameras outside the vehicle. The whole thing was nicely written, with Bartels letting Deeks show his support and determination, and then end with what he’s best at, using humor to alleviate tension.

ECO and Daniela Ruah were great, too. Reading the words on the page, it’s easy to imagine this conversation getting loud and dramatic- “Screw that and screw him! Let’s hunt him down and let’s drag him back to prison!” But they both played it in a subdued way that didn’t take it over the top. It was just two people who love each other having a rational conversation about how to handle an awful situation. Their hushed tones gave it a different kind of intensity that made me listen more closely than if they’d been strident and emotional.

This scene also made me appreciate the fact that Kessler has been out there lurking off screen, giving us something to think about and giving a sense of suspense a chance to build. This show has too often killed off its interesting bad guys sooner than necessary (Sidorov for example). Having charismatic evildoers around to torment the team adds interest (or maybe that’s just my devious mind talking).

We’ve got at least one more week of Russians coming our way. I must admit to a negative reaction to the promo (spoiler alert) at seeing yet another female character locked up in a container waiting for the (mostly) men to come rescue her. I really hope this theme gets completely upended when it comes to how the Kessler storyline plays out.

In the meantime, come back later this week for new editions of Deeks’ Surf Log and Kensi’s Journal, plus a new preview for next week’s episode. Before you go, tell us what you thought of “Red Rover, Red Rover.” Were you caught up in Callen’s girlfriends’ plights? Did you enjoy the Densi scenes? And most importantly, wouldn’t Arkady make a great stepfather for Deeks?