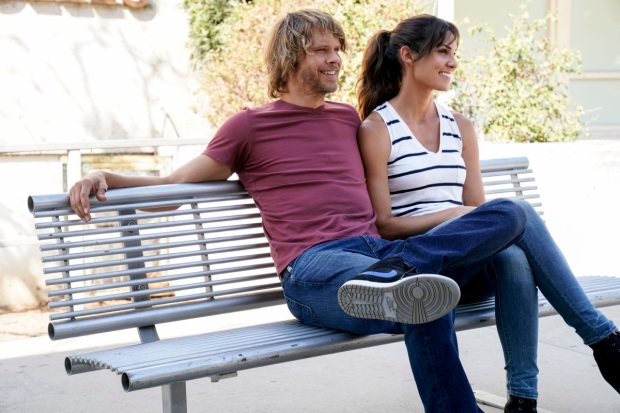 I always approach an NCIS: Los Angeles episode written by Jordana Lewis Jaffe with caution, knowing she’s capable of anything from a funny and vulnerable Deeks (“Unwritten Rule“) to one who’s the subject of much mocking (“Big Brother” and well, the end of “Unwritten Rule”). In this week’s episode “Pro Se,” she delivered a wonderfully multi-dimensional Deeks who was competent and capable, caring and compassionate. This lovable Deeks, aided by a team giddily unencumbered by adult supervision, made for a very enjoyable episode overall. 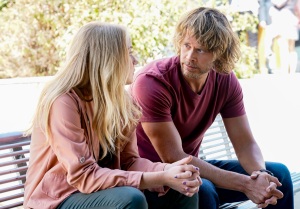 This might have been the first episode this season where we really got a Deeks who operated as his own person, separate and apart from Densi. Not that I don’t love Densi, but sometimes it’s nice to see both characters taking on their own individual challenges. In fact, this episode had more scenes with Deeks without any other team members present than any episodes I can remember except for a few last season when Eric Christian Olsen was clearly working a limited schedule. What was nice here was that his scenes didn’t feel specially manufactured to keep him separated from everyone else; they felt organic and part of the overall story.

In many ways this episode featured a classic Deeks, one who quickly blames himself for problems and goes out of his way to protect a woman in trouble, especially since he feels responsible for said troubles. His passion for helping Tiffany is obvious right from the start, when he dresses down her attorney. His telling Kensi that Tiffany’s plight is “on me” was right out of “Plan B,” when he used the same language to describe Ray.

Eric Christian Olsen was fantastic throughout, never over-playing the drama but clearly communicating Deeks’ mindset, sometimes through body language alone. He slams the courtroom door open in disgust. He almost has to take a knee when he realizes Whiting’s appeared, and he slumps against a bench on the pier after their disheartening conversation. He clutches his baseball bat while spewing legal advice in what felt like a reference to Tom Cruise in A Few Good Men (Tom’s JAG lawyer character always did his best legal thinking while holding his bat).

Deeks’ vulnerability in the scene with Kensi on the beach is heartbreaking. His face when Kensi tells him he’s a good man – a combination of happiness, wonder and gratitude that Kensi sees him that way – shows how much he values Kensi’s opinion, and how she can probably never tell him this enough to make him really believe it. This line and his reaction, a beautifully written and acted moment, get right at the essence of this character.

We also got a impressively Competent Deeks. He not only knows the law, but he figures out what happened during Tiffany’s missing hour (nice detecting, Detective). Even Sam and Callen demonstrate (some) confidence in his legal abilities. My biggest disappointment of the episode was not having them cut more to Deeks feeding the legal lines to Callen. I wanted to see and hear Counselor Deeks! Oh, and let’s not leave out his sharpshooting when under fire, taking out two of the bad guys from a distance. It’s not often we get to see so many of his talents on display at once.

Whiting (played by Karina Logue) has always made a great foil for Deeks. Their relationship has evolved over time, giving it additional layers. One thing that makes her such a good character is that she reads Deeks pretty well. This allows her to effortlessly get under his skin, but it’s also what has helped her to realize that he really is a good man. (And wasn’t that the episode’s theme?)

Despite the overall seriousness of his scenes, Deeks managed to find a nice balance between cracking jokes and taking everything to heart. There were so many shots of him looking sad/thoughtful/somber/soulful/smoldery (is “smoldery” a word?) and I loved them all, but he also found small bits of humor throughout the day that didn’t feel inappropriate, like teasing Whiting about rocking her pantsuit or using her brain.

And we also got some lovely Densi moments, as Kensi provided Deeks with stellar support throughout the episode. The beach scene was beautifully shot by director Benny Boom, especially the final image from a distance showing Kensi leaning into Deeks. So sweet! (Not so sweet: I’m pretty sure the “cloud” above them was actually smoke from distant fires that had swept over the area, producing an almost eerie sky over the whole city.)

Perhaps the most interesting development of the night was Deeks rediscovering his love of the law. He really seemed to enjoy being able to put his legal knowledge to use. Eric Christian Olsen had made a passing reference to this in our interview when asked about his long-term wishes for Deeks, saying, “I think he has this idea that he wants to maybe go back to being a lawyer…” All I can say is, better late than never for Deeks to remember he has another profession to fall back on, one that doesn’t require late night hours behind a bar. Please let this be the direction he goes in the future. I’d add that would have been a great episode in which to reveal why Deeks switched away from law to join LAPD, but alas it looks like they are going to make us wait until Season 15 or 20 to find out these kinds of juicy details.

I’ve got nothing. No major complaints. The worst thing I saw was the return of an apparently crazed Mosley next week, but there’s no need to discuss that yet. (Although I will admit to rooting for the cartel- does that make me a bad person?) 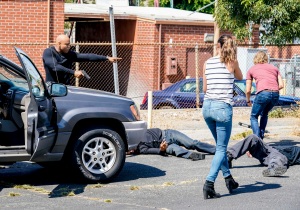 I guess if I had to complain about something, it would be that the final scene on the bench with Densi could have led nicely right into a larger discussion about their future. Deeks brings up an alternate career for himself, one that addresses his main and recurring concern about safety. Kensi could have run with that to talk seriously about their plans. But instead she jokes that – ha ha – he actually did get shot at today. That’s not really funny- he had four guys with automatic weapons all trained on him and I’m sure in the moment she was worried. One of Kensi’s problems/skills is that she recovers far too quickly from their near-death experiences. She is completely unfazed by Sam strategizing about the timing on exhaust fans that will kill her if not perfect. She really is cut out to do this job until it does actually kill her. Unfortunately that kinda doesn’t work for Deeks. Stay tuned for my debate with Psyched on this very topic, coming soon!

While I wasn’t sure it was super in-character for Sam to be so gung ho to implement a “legal adjacent” plan, I did buy that they were really enjoying not having any supervision. It sure does free up the options. The only false notes were having Nell and Eric as audience surrogates so they could be read in on the latest operation- not sure why they weren’t involved to begin with – and that laughable comment from Callen that Mosley is loyal. Callen did seem to be having fun doing what he does best – playing a super smirky, snarky character. I think this is what Chris O’Donnell does best, and the show is at its lightest and funniest when Callen is filling this kind of role.

I cannot tell you how little I cared about Anna, or about her relationship with Callen (what’s left of it anyway). Just when I thought I had maybe kind of somewhat come to find her borderline acceptable, she has a couple of scenes that make her appear a little unstable. Actually kind of like a deranged, stalker ex-girlfriend. I guess I’m Team Joelle if I could make myself care about Callen’s love life at all.

There was very little in the way of action in this hour and I didn’t miss it at all because I so enjoyed all the interactions between the team. I really like this dynamic without anyone supervising- they seem more relaxed, plus they all get more screen time together. A win win if you ask me.

What did you think of “Pro Se”? Have you warmed up to Whiting? How did you like (or not) Anna’s appearance? Did you enjoy all the Deeksness as much as I did? Tell us in the Comments below!