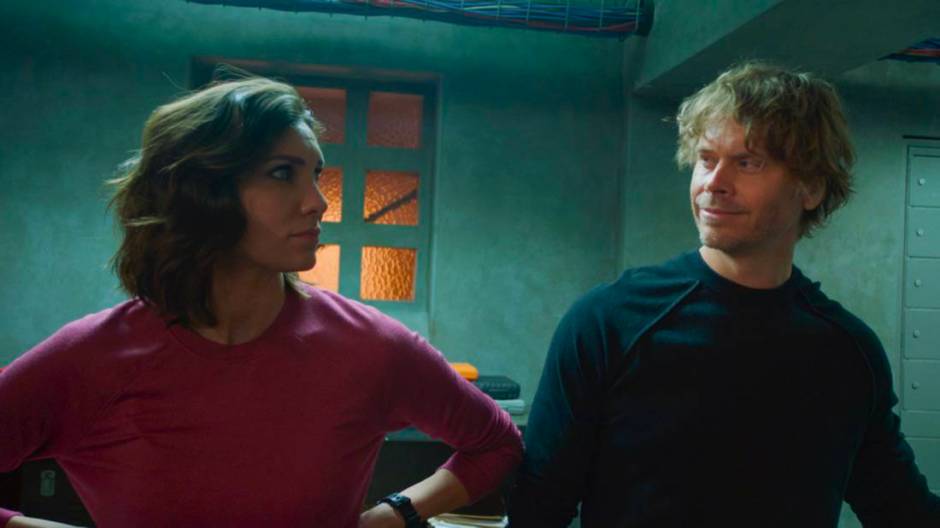 This week’s NCIS: Los Angeles episode “Signs of Change,” written by Indira Gibson Wilson and Jordana Lewis Jaffe and directed by Dennis Smith, provided us with some heartwarming moments between the characters we love. It also brought us a guest character with an intriguing background, even if the plot itself lacked the originality of last week’s “Imposter Syndrome.” (Stolen military technology? As Callen said, “Here we go again”). Thanks, by the way, to Diane for taking on last week’s review. I just got to read her entertaining post and the interesting discussion it generated- if you haven’t yet, check it out now.

The stolen technology plot may have been old hat, but the episode’s opening scene was unusual in that it began without dialog and with only muffled sounds. The presence of background music made this difference slightly less apparent at the time, but once the nifty action ended, we discovered that the episode’s main guest character, Sienna Marchione (played by Raquel McPeek Rodriguez), was deaf. It then became clear that we had been experiencing the world through Sienna’s ears, providing a creative introduction to her character.

The whole episode did feel a little “Make a Wish,” to borrow from Admiral Kilbride, but Sienna was likeable and she did provide useful assistance to the team. Perhaps she’ll pop back up one day as a new NCIS agent, much like Ehsan, who worked in much the same capacity with Deeks in “Allegiance.”

While Sienna did seem to fit right in, her initial conversation with Densi got off to a poor start. The level of hostility Deeks exhibited towards her felt just a bit off. Sure, it did seem awfully coincidental that she was out getting coffee when the bad guys arrived, but wouldn’t the fact that she captured two of them make her less suspicious? This non-“warm and cuddly” version of Deeks didn’t feel totally in character, although his apology did. Also unfortunate was the writers’ choice to have Deeks later brag about his interrogation skills for humor’s sake (and maybe as an excuse to give Eric Christian Olsen a lighter schedule?) only for him to apparently fail in his off-screen attempts to get the bad guys to talk. You all know how I feel about Competent Deeks.

Everything is gonna be fine.

If I’ve said it before, I’ll say it again (I can be at least as repetitive as the show!): While it’s understandable that efforts to have a child would be a primary source of conversation for Kensi and Deeks, these exchanges have long since stopped feeling new. I appreciate the writers trying to give us some angsty Densi (it is my favorite form of Densi after all), but much like the wedding planning, these conversations have lost their appeal a bit.

This episode’s opening Densi talk was also confusing for me. In “A Line in the Sand,” Kensi told Deeks that she wouldn’t continue to do her dangerous job if she became a mom (“I wouldn’t do this if we had kids”). Was that just something she said in the heat of an argument? Has Deeks’ becoming an NCIS investigator somehow shifted their long-range plans? While it did feel awkward and insensitive for Deeks to be pushing Kensi to figure this out before she even gets pregnant, it simultaneously confused me because I thought they already had some sort of plan.

Perhaps it’s just the showrunners way of walking Densi back from a place they can’t be- stay at home parents- while still remaining a vital pairing on the show. Maybe it’s their way of planting the seeds to allow Kensi to have her “little ninja baby” (perhaps during the summer?) and then keep them kicking bad guy butts until the show inevitably ends (say ten or fifteen years from now). If so, I can happily go with it. Seeing Deeks become a father and giving him a chance to put some of his self-doubt to rest is more important than plot consistencies.

While Deeks didn’t understand the reasons behind Kensi’s desire to work with Sienna in the first place, he sweetly went along because he sensed the presence of said reasons. As Nell said, “Couple goals.” But the whole connection between Kensi wanting Sienna to work with them and her not wanting to work out the particulars of parenting seemed a bit tangential at best, and the final Densi scene, while sweet, again felt like a scene we’ve seen many times before. Still, it’s always nice to end an episode with supportive Densi.

The other team members provided their own strong contributions throughout. Sam telling Nell about his intended graduation gift for Kam was moving not just for Nell, but for us. I was “feeling the feelings” too, Nell. It’s nice that the showrunners haven’t let Michelle’s memory die, and Kam will surely appreciate the gift (along with those tickets to Italy!). Uncle Callen also provided more nice moments to reflect on Michelle’s loss (and her strength), and he was cute taking care of Sam after he got shot. The discussion of the dangers of Michelle’s job served to highlight the Densi need for a parenthood plan, and made Sam’s injury during the shoot-out all the scarier, for we knew in the moment exactly what- or whom- he risked leaving behind if he were killed in the line of duty.

Nell and Kilbride are developing a lovely relationship. His mentoring reminds me of how Granger used to talk to her. And while it would be great for Nell to finally shake off her confidence issues and just own her new job, Kilbride has brought a dose of straight talk that will hopefully pull her out of her tendency towards self-pity, the feeling that she’s stuck with a job she doesn’t want. His advice to forget WWHD could really help her flourish. His sharing his regret about the military’s decision to forbid deaf people from serving was also a sweet moment well played by Gerald McRaney. Kilbride’s tartness balances Nell’s sweetness, and I find myself enjoying Nell more when he’s around. I hope they give us more of this pairing.

And sorry, but I didn’t even notice that Rountree was missing.

That’s it from me. I’m looking forward to next week’s Frank Military written, directed, and acted episode. Check out Lyssa’s preview this Saturday. In the meantime, be sure to come back later this week for new editions of Deeks’ Surf Log and Kensi’s Journal. And tell us what you thought of “Signs of Change” in the Comments below.