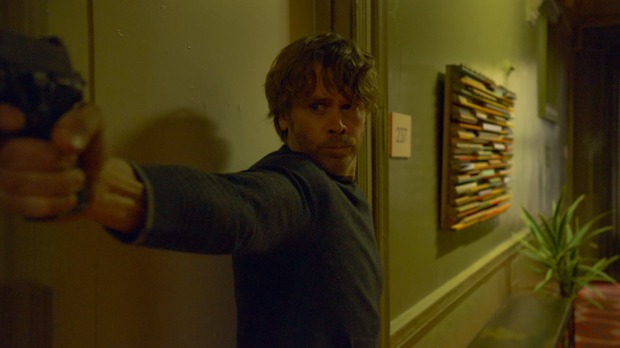 Hi folks!  I’m filling in for Karen this week and it’s been awhile since I’ve done one of these reviews so go easy on me.  But you know what they say about riding bicycles… you never forget how to ride one and you never forget how to write a good review when you have an outstanding episode like this one. This week NCIS: Los Angeles gave us an exciting storyline penned by Samantha Chasse in her first solo effort for the show. It successfully melded the newbies with the core pairs of Sam-Callen and Deeks-Kensi while offering some sweet Densi emotion and some kick butt action directed by Eric A. Pot.

I have written many a review of this show in my day, and I have learned to leave the plot way behind as I searched to pull out those bright nuggets of character interaction and development into the forefront.  It’s always what kept me coming back week after week. You didn’t think it was all those explosions, did you? Yet this episode was different  despite the exciting fireworks at the end because there were many shinning gems to be found throughout the story.  Lets look at some of those highlights…..

Although I have yet to warm up to Fatima and Rountree I have to admit their characters may be growing on me despite the fact that I feel most of the time they are superfluous and not needed. Even Callen’s not too sure about the new recruits, “The kid’s got this right??” But this time was different. The young agents actually felt like one of the team and not isolated from the whole. Actually the entire team seemed to be back on track again and working together like the NCIS gang of old. Welcome back guys, we missed you!

It was fun to listen to Deeks’ impersonation of Doc Holiday and Kensi’s lament about changing the Netflix password. But Kensi is troubled and still at odds over the ‘magic of matrimony’ especially while her demons are still churning inside her head. Poor Deeks (Lord, how many times have I written that phrase?) is trying desperately to bring her out of her funk to no avail. The guy tries soooo hard.  Sometimes you have to wonder why Kensi can’t see how much Deeks is suffering alongside her as they wait to find out if she can conceive a child. This is killing Deeks because he wants so much for her to be happy in her pursuit of becoming a mother. They are going through this together, but it seems Kensi can only see her own pain. I get it, never having kids, I can only imagine how heartbreaking it is to yearn for a child that may never come. So, I’ll give Kensi a break and show some compassion. But I just wish she didn’t need to feel her only option is to take it out on Deeks. Yes, another angsty night at the Deeks’ household.

Back at Ops, Nell is having her own problems trying to take the mess that was Hetty’s former office and redesigning it into an organized space she can use. She may not be picking out paint but it is a ritual that she needs to perform desperately. She has real doubts about filling Hetty’s shoes and like Kensi, those same demons of doubt keep swirling around in her head as she clears the disorganization from Hetty’s office. Can she measure up to the job? Despite being a pint-sized ninja, Nell has the right to be dubious and skeptical. She’s young and inexperienced and Hetty is a legendary icon who is most certainly an enigma, and maybe impossible to live up to. But even Hetty had to start somewhere and eventually Nell has the potential to be a great OSP manager, if her insecurities don’t tear her up first. This week she showed some real nerves of steel. She just needs to believe in herself. But will she stay long enough to find out or let her insecurities override the potential within?

Why is it that every store Kensi and Deeks investigate has some sort of employee from hell? In this case, Danny is ready to gleefully throw his manager under the bus and provide the intel they are seeking to lead them to a viable suspect in the case. The best parts of these scenes are the faces Eric Christian Olsen pulls to express doubt, suspicion, or surprise at some the employee’s theories. It’s worth it just to watch Deeks try not to make fun of these airheads. Making us smile is what Eric does best especially when he’s trying not to make us laugh.

As the team tracks down who created the deep fake, the action in the apartment complex is exciting to watch as Deeks is filmed in slow motion as he dodges bullets in the hallway. Nice touch.  Pot does a great job of creating the tension throughout the scene. It was so creepy hearing the digitally created voices of the team answering Nell’s questions in a zombie like fashion which added an additional terrifying aspect to the scene. The comms have been compromised and Nell is faced with whether or not she gives the terrorists what they want or risks the lives of her team. This is where the metal hits the road, and Nell finally shows us she has what it takes to lead this team. It was satisfying to watch her grow stronger and more confident.

Digital immortality. The premise of this episode has far reaching implications for the world and the burgeoning of want-to-be dictators. If this technology is currently in place or being developed, the world just became a scarier place. As I listened to Callen interrogate this terrorist his words were unsettling. The battle for ideologies has reached a whole new level. The next Bin Laden will never be silenced. Not a lovely thought at all, Callen.

What if we’re never pregnant? Kensi decides to acknowledge the elephant in the room and address the question that needs to be asked. Always jumping to the worst case scenario, Kensi decides to berate Deeks for not seeing the big picture. But one of the reasons we truly love Deeks is his joie de vivre, always choosing optimism over pessimism. (Unless it comes to himself but then that’s for another show and review.) This show has the ability to douse us with a large dose of reality, yet Deeks is always trying to bring things into perspective by teaching his partner that life is a series of paths to be taken and they need not be all dark roads to be traveled down. I laughed when Nell tells Deeks, you can’t fake that level of annoyance. He may be annoying but he’s usually right. In the end Kensi realizes love is all that matter and she truly loves Deeks. Once she gets done berating herself for not being perfect, she gives into the possibility of optimism, forgives herself and picks up the paint brush.

The episode came to a rousing and final conclusion with a big boom! The action and choreography was so well done, and harkens back to episodes which have become legendary with fans. Pot and company did a great job. Seems like we’re still grappling with Katya and the aftermath of the Russian debacle so this whole arc of the series is still in play as well.

We only have a few more episodes left this season and it will be interesting to find out where the showrunners will take us next. What did you think of this week’s episode? Leave your comments down below. Don’t forget to return later in the week for Deek’s Surf Log and Kensi’s Journal as I’m sure they will have much more to say about this week’s case.