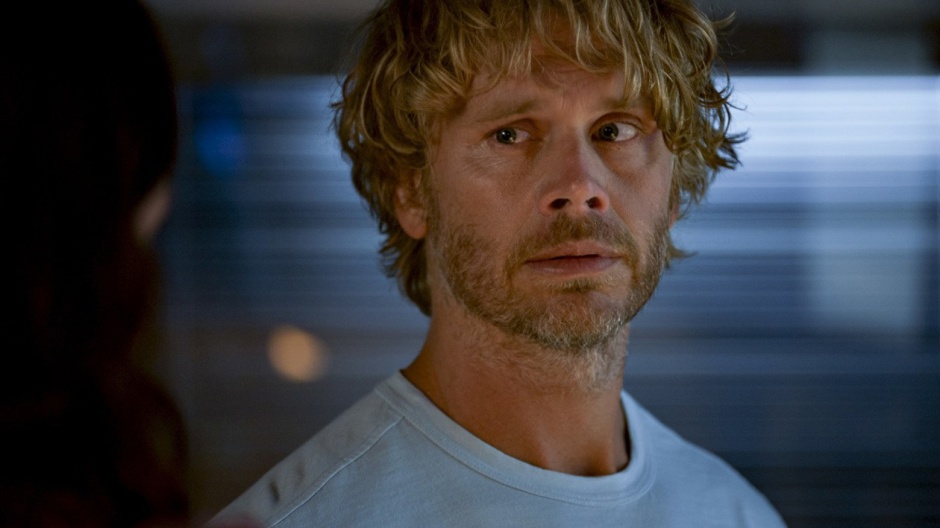 This week’s episode of NCIS: Los Angeles, “Indentured,” saw the return of Frank Military to the writer’s chair. He paired up with director Eric Pot to deliver the strongest episode of the season, a standalone story with a couple good twists that contained no Russians or talk of babies, just the standard dose of darkness we’ve come to expect (and enjoy) from Mr. Military.

The episode began with a gripping, well-shot cold open shoot-out. It’s always immediately involving when the cold open involves our team and not just a stranger. This scene in particular reminded me of the fantastic shoot-out at the start of “A Line in the Sand.” In this case, Callen and Sam appeared to know ATF Agent Francisco Reyes, and their worry as they raced to help him conveyed a sense of urgency to the scene that had me rooting hard for them to get there before it was too late. Afterwards, it also had me rooting hard for them to get the bad guys responsible.

The episode centered around conflict between Sam and Callen and Kilbride as they tried to bring the killers to justice and secure the illegal firearms. It ended with a meeting of the minds over a single malt. Trust does have to be earned. It’s also one of the show’s continuing themes, right along with problematic parents. However, the divide between Kilbride and Sam in this episode felt a little forced. I’m not sure it’s legal in California to privately buy or sell weapons at all, and it sure didn’t seem like the general was filling out any required paperwork, making his purported innocence all the shakier and Kilbride’s reticence to go after him all the more out of character. We don’t need tension within the team in order to enjoy a dramatic story.

I did enjoy the twist of having Kilbride one step ahead of his “partner” on the case, proving to Sam, Callen and us that he was on the right side all along. Here’s hoping their working relationship continues to grow. It would be great to see them all working together to support the team and especially, to protect and encourage growth in the newbies.

Before Season 13 began, I wrote a list of the top 10 things I wished for this season. Item #6 included more undercover assignments. This is a team famous for their undercover skills, yet over time they seem to be going under less frequently and for maybe only a single scene here and there. It’s a great way to see the team tested, to watch them improvise under pressure, and to see them play off of one another. All this to say that I really enjoyed Kensi (and Fatima’s) assignment to Tranquility Villa.

Let me pause here to express some dismay at the re-use of the same rehab facility (in name at least- the logo and exact location seemed to have changed) that the team penetrated back in Season 5’s “Recovery.” It troubled me that they neither acknowledged it nor took a moment to think through whether it would be safe for Kensi to return there given her original cover as a dietician was blown at the end of the episode. I have to believe there was some additional content that had to be edited out- Kensi and Deeks definitely seemed to have had further conversations with Fatima about the assignment, given that they knew she’d be joining Kensi when they spoke in wardrobe.

We did get an oblique reference to Densi’s original assignment when Deeks joked about the pool boy having a sex addiction, but it felt like a missed opportunity for them to reflect back on where they were in their relationship at that time, and what happened the very night that original operation ended. Again, maybe we just missed out on some deleted material.

The conversation in wardrobe where Deeks spun out his wacky possible backstory for Kensi’s character was charming. It actually addressed another item on my top 10 list, #6- more Densi variety, as in, show us more than the serious, struggling Densi we had so much of last season. Here, we got a few moments of them enjoying one another’s company and being silly together, and it was refreshing to see.

It was also fun to watch a grungy, serious Kensi playing an addict. Her demeanor shifted considerably, and I would have absolutely believed she belonged in rehab. Fatima, on the other hand, didn’t really feel like she was projecting a different character, other than being so physically aggressive. She’s been somewhat whiny and insensitive around the team, so the cover didn’t feel like a big leap for her. Maybe Fatima has this kind of work dialed in because she used to be an actress, but it would have been interesting to see her ask Kensi for advice on how to approach it, or maybe express curiosity about how Kensi had managed to summon such deep emotions when convincing Mia she would kill her abusive boyfriend.

I was glad that Fatima (and Rountree) were there largely to set up and support the main four to carry the story forward. And that story took a very dark turn. The actress who played Mia, Lex King, was great. Her height made her initially appear somewhat intimidating, but she showed so much vulnerability that I really came to care about what happened to her.

I did have to chuckle in the scene where Kensi expressed her willingness to shoot Mia’s boyfriend. Last week she was reassuring people in the gym that at least they could shoot a man from a distance, and here she’s feigning (?) enthusiasm about being a gun for hire. It was all very much in character.

The other source of amusement was Deeks showing up as “Max.” While I appreciate the callback to Deeks’ alter ego, this again felt like a bit of a missed opportunity. They could have had him throw on a grungy jacket and try to be a bit more intimidating, or he could have expressed dismay at the use of his least favorite undercover role. I think I might have enjoyed an extended cut of this episode, where we could have had a bit more time to spend on backstory callbacks.

The intensity of emotions Kensi summoned when she shared her characters’ backstory about being raped and then murdering her own abusive boyfriend surprised me. It was truly impressive that she could pull up so much emotion and be so convincing in that role. It made me wonder exactly where those emotions were coming from. We can’t answer that question, but my guess is that she was imagining Kessler’s stated plans for her, what it might be like if he succeeded, and how relieved she’ll feel when he is eventually killed, hopefully by her own hand. He had been the subject of conversation just that morning, making him unfortunately fresh in her mind (although something tells me he’s never too far from her thoughts).

Confronting (and Embracing?) the Darkness

So yes, the subject of Kessler returned at the episode’s start when Deeks told Kensi that the man’s girlfriend had been found dead in Florida. Not the happiest way to start off a morning, but as Kensi said, at least they had found out something about Kessler and not the other way around. She could be predator, not prey- a “little predator, little cute, cuddly velociraptor,” as Deeks playfully described. Military is better than most at introducing personal information into the middle of a case without it feeling forced (see “The Seventh Child,” so for me, the Kessler talk worked well.

Still, serious Densi was definitely present, and how could they not be given the subject of Kessler being raised? A deadly serious Protective Deeks was on full display, telling Kensi that he’d kill Kessler if he had the chance, that, “He’s not gettin’ a second chance. Not with you.” This Protective Deeks is quite appealing, although he does run the risk of trampling over Kensi’s determination to protect herself.

It has the potential to be an interesting dynamic, an intriguing source of conflict, between them. For Kessler seems to be triggering all of Deeks’ instincts to protect women in danger. His drive to do so is maybe the most fundamental source of motivation for his life choices. He’s always managed to toe a fine line with Kensi though, absolutely respecting her ability to take care of herself, actually finding that quality appealing, and being in awe of her strength. Yet how can he not want to do everything in his power to protect her – the one person in the world he can’t live without – from this horrible man who promised to do horrible things to her?

Deeks killed Boyle to protect a woman. We still don’t know the exact circumstances around that act. It doesn’t seem like it would take much to get him to cross the line with Kessler if he had the chance. It sure would be a great way to explore his character. Who knows, maybe they could even work in the Boyle details and turn it into a “Deeks, M” episode. (I know, I know, but I can dream, right?)

Military gave us a second plot twist when we learned that Mia had taken matters into her own hands, killing Meyer herself rather than allowing Kensi’s undercover character to do it for her. When the news was confirmed, Kensi was lying awake in bed, presumably worrying about Mia. Upon knowing Mia would be safe, Kensi seemed quite comfortable knowing that she “…Gave her the courage to do it.”

I enjoyed the twist, although I wasn’t sure how comfortable I felt about the darkness of Mia’s act, and Kensi’s (and Deeks’) willingness to let it go. Obviously Meyer deserved to die- we watched him and his men gun down a team ATF agents, and he was hatefully abusive, after all. Yet whenever the team takes the law into their own hands – in this case giving Mia a head start from said law – I have to admit to feeling just a little uncomfortable. And those shades of grey, I suppose, are what makes things interesting.

In this case Deeks gently tried to confirm what his ladybird wanted to do. Even here, he was still a voice of the law and of conscience, as he pointed out that Mia would be long gone by morning. In the end, though, he wasn’t about to contradict Kensi, and I don’t think he’d have wanted to (he did hide Tiffany away for years after Boyle), so his soft “OK” felt right.

The episode didn’t feature a ton from our favorite character, but we got some quality scenes and an absorbing story, so I’m very satisfied. We also had no mention of Russia- item #10 on my list! Unfortunately that streak ends at two episodes with the return of Katya next week. Come back then for a review from my wikiDeeks colleague Brenda along with Lyssa’s fabulous preview. And before then, check back in for new editions of Deeks’ Surf Log and Kensi’s Journal. For now, let us know what you thought of “Indentured.”