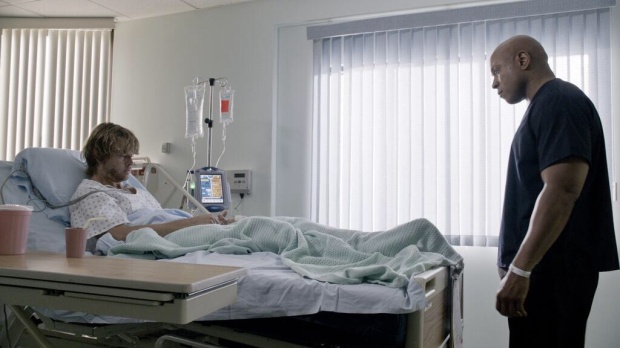 Deeks and Sam, the odd couple of NCIS: Los Angeles. Right from the start, these two have been at odds. On the surface they appear to be quite different personalities, even though deep down they really have much in common. I think it’s the differences though that make for their great chemistry, and great scenes together. Let’s celebrate this duo with a list of their Top 3 scenes.

No major rules here, just the top scenes featuring these two together.

I have to say that I really struggled here between my favorite scenes with this pair, and those I thought were most significant. There are many that are great examples of the tension between them (pre-“Ascension”). There are also some wonderful scenes post-“Descent” after Sam finally saw the error of his ways. How to choose? In the end, I tended to go with significance. In reverse order of importance, The Top 3 Deeks/Sam Scenes are…

This is the scene (written by Matt Pyken) that started this relationship in the wrong direction. Poor Deeks gives it his all, but he can’t last a round against an undercover Sam Hanna, who has about 40 or 50 pounds of muscle on him. He does get in a few good licks in a very well choreographed fight, and he shows Sam that he’s not intimidated by him.

In fact, this was an incredibly challenging way for Eric Christian Olsen to start off his NCIS:LA run. Not only did he have to act against Linda Hunt, he had to learn all the fight choreography and carry it out against megastar LL Cool J in a gym stocked with extras from the real MMA fighting world. Not intimidating at all! If you’ve never seen this behind-the-scenes look, check it out. About five minutes in, you’ll see what happened after LL accidently hit Eric on the chin. I hope I never have a first week at a new job that’s anything like this looks to have been (a second video is here). And consider the fact that this could have been simply a two-episode run as a guest actor; at this point they hadn’t decided to commit to him as series regular. What incredible pressure he must have felt.

Deeks and Sam have had a contentious but complicated relationship, much more so than a simple fistfight could produce. But it all started here. Deeks’ unwillingness to back down could be seen repeatedly in later episodes (“Fame”, “Tin Soldiers”). Sam’s frustration with Deeks simmered below the surface from this scene on through the next three seasons.

That frustration came to a head in “Descent.” I was tempted to name the chess scene from this episode to The Top 3, for that was where Sam’s dislike and distrust of Deeks finally became clear. So clear that it inspired my hiatus-long rewatch (and resulting obsession) of the whole series, to try to understand what caused Sam’s issues. Instead though, I’m going to pick the final scene of the episode, where Deeks is tortured by Sidorov and Andros. Sam is more terrified than I’ve ever seen him, not trusting Deeks to keep his wife’s cover safe. But he does. To paraphrase Deeks, he’s had everyone’s backs for more than three years, yet he could never do enough to satisfy Sam. Here his heroic actions finally get through Sam’s stubborn assumptions about his character. Deeks’ bravery isn’t that of someone who isn’t afraid, for we can feel his terror. It’s the fact that he withstands the torture despite his terror, and the obvious pain inflicted on him, that is so impressive. It’s the turning point for their relationship, not to mention the most haunting scene of the series and one that freaked many of us out for an entire summer. Part of its power was in the way they played Deeks’ awful screams off-camera, allowing us to understand the horror through watching Sam’s pained expression.

#1. The hospital scene in “Ascension”

I’m bringing these two full circle with my Top 3, to the hospital scene where Sam redeemed himself in my eyes for misjudging Deeks. His regret is sincere, and his heartfelt support of Deeks, who’s doubting whether he can continue as a detective, is wonderful to see. I spent an entire summer angry at him, yet LL Cool J successfully made me feel better about Sam’s character in this single scene. If I had a Top 4, I’d definitely add in the hug in “Omni”, which again was completely heartfelt and a big favorite of mine. But alas, it’s a Top 3 list, so I’m going to stick with this moment in the hospital, which is incredibly well acted by both men, moving, and important for both characters.

A few other Deeks and Sam scenes that came close to my Top 3:

We’ll switch from all this testosterone to a less serious topic next week, with a discussion of Deeks’ Cheekiest Moments. There are so many to choose from! How will you pick your Top 3?

In the meantime, tell us about your Top 3 Deeks and Sam scenes. What stands out for you in their checkered history?

10 Comments on The Top 3 Deeks/Sam Scenes