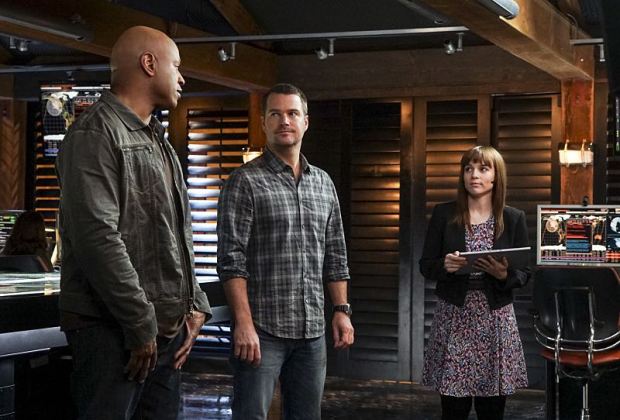 The consistently high quality of the first eight episodes of NCIS: Los Angeles Season 8 is a credit to all the writers and especially to showrunner R. Scott Gemmill. It really is looking like the program I always wanted it to be. Well, except for the lack of Densi scenes, but that’s not Gemmill’s fault (blame David Paul Olsen!). This week’s “Glasnost,” penned by Andrew Bartels and directed by John Peter Kousakis, was another solid episode, although I did find one thing to complain about (Beale!).

In keeping with the episode’s title, a reference to increased transparency, let me share that I’ve never found Callen to be a particularly compelling character (probably not a real secret to you regular wikiDeeks readers). I do enjoy Smirky Callen, but Emotional Callen tends to make me think of wingsofnight’s great Tumblr NCIS:LA bingo, with a square that reads “Callen looks like he swallowed a bee.” Despite my lack of empathy for him, I found this week’s case to be involving and well written.

The slightly pointed references to family and to “Uncle Callen” at the beginning had me primed for some new developments in the Callen family tree. I loved the many callbacks to past episodes, including the references to Russians who first popped up during the lead-up to finding Callen’s dad, as well as to Hetty’s history as Callen’s mother Clara’s handler. And of course we had an appearance by everyone’s favorite guest star, Vyto Ruginis, who plays Arkady. I particularly find Sam’s reactions to him (“You’re loyal to no one but yourself, Arkady”) endlessly entertaining.

This episode definitely improved on the disappointing one where Callen finally found his dad only to turn around and flee the country, because her we got to know Garrison a little, and Callen apparently now has a chance at answers to all his questions- real potential closure on his series-long quest for identity. I swear R. Scott Gemmill is ticking through a list of things fans have disliked in the past and trying to rectify them. (At this point I think it even seems possible that he could address The Punch!) Daniel J. Travanti’s strong performance has made Garrison intriguing, and I hope he gets to stick around for awhile.

Garrison’s talk with Hetty was elegantly written. I appreciated, as always, hearing Hetty express regret and responsibility for a past mistake, and the notion that she wouldn’t want Garrison to experience the same (or worse) remorse with those he’d been responsible for was a great touch by Bartels. But seriously, Callen saying that he needed to have a talk with Hetty about keeping secrets is about two or three decades too late!

When Garrison apologized to Callen for not keeping his promises, saying “I will be with your mother soon,” I did feel a little pang of angst and worry. But it all worked out and now Callen has a whole new family. I appreciated the bittersweet quality of him discovering his new sister as he stood at the grave of the only sister he ever knew. I do hope this turn of events, having a real family to be a part of, might help him grow into a more interesting person.

Saddle Up for Deric

So this week it was Eric’s turn to take to the field. On the good side, I appreciated his attention to detail in finding evidence. On the bad side was pretty much everything else. Well, Eric Christian Olsen did handle the ridiculousness as deftly as possible. His dismay was pretty hilarious at times and his deadpan delivery did serve as a delightful foil to Beale’s enthusiasm. I loved Deeks’ making-it-up-as-he-went-along excuse to keep Eric from following him back into the field to interview witnesses at the café. Beale, you know you’re not doing well when your partner would rather spend his time with Granger…

Deeks: ‘We should check,’ oh ‘cause you wanna come hwith me… No that seems like a good idea, I just thought that Granger had mentioned prior to this that he maybe wanted to get out of the office.
Eric: Oh, well, Granger is out of the office. He’s out of the office all day.
Deeks: That’s interesting. He’s out a lot lately. Where is Granger?
Eric: This may come as a surprise to you, but Granger doesn’t really share things with me.
Deeks: Not surprising.
Eric: So, you and me?
Deeks: Yeah, let’s uh saddle up, shall we, partner? And this pains me to even have to say, but no grenades.

On the bad side, the initial interrogation was a joke, and not a funny one. Eric’s lack of professionalism and inability to take his job seriously kind of offended me. It was disrespectful to his partner, and made Eric look immature and silly. The same thing happened at the café when he insulted the customers. He behaved as if he’s received no training at all on how to conduct himself. (I did think his shriek at the sight of the dead homeless guy was pretty funny.)

Aside from stupid comments, how scary must it be for Deeks to have to babysit Eric when the bullets start flying? I feared for Deeks’ (and Eric’s) safety. Sure, Eric might have saved Deeks’ life but that doesn’t mean he has a clue how to handle himself in a firefight. Can you imagine him in a situation like the one in “Greed” where Kensi has a gun to her head, or having to fight hand to hand with bad guys like Deeks did in “Internal Affairs”? I’d much rather have Nell watching my back (but please keep them both in Ops!). Is this the only alternative to Anna? Just think about how Sam and Callen would have berated Deeks had he ever shown such a lack of professionalism or simple common sense. It’s as if Eric thinks he’s playing in one of his video games rather than risking his life (and his partner’s) for real. It was nice that Deeks was so patient, but I’d have preferred that he pull Eric aside and give him a stern lecture about the high stakes of this job. Whew, OK, rant over.

We All Missed This

I had extremely low expectations for the Densi this week given the episode’s clear focus on Callen. What a pleasant surprise it was to see Callen and Sam having morning coffee with Kensi? We felt we missed this the evening they took her takeout, so it was great to see something similar, and it provided a nice reminder of their team banter. Kensi’s not the only one who’s missed this. Their encouragement and support was also delightful. But would it have killed Kensi to tell them not to “Stay safe” but to “Keep Deeks safe”? (Especially given his partner of the day!) And wow, Kensi’s made so much progress. How wonderful to see her walking on her own.

I have to say I’m not sure why Sullivan, who’s lost part of his leg, needs to practice cutting up his vegetables. It seems as though he doesn’t need the therapy and is there because someone sent him to coach Kensi. Still, the food fight was cute. I’m not sure I approved of the headlock though- that felt a little, um, intimate.

But can we talk about the last Densi scene? She’s home! Of course, she still has a hospital bracelet on her wrist- I assume that’s to get in and out of the hospital for therapy each day? While I would have loved to see the Welcome Home celebration Deeks no doubt arranged, it made me so happy to see her there with him. And the way he encouraged her to practice her ADL by holding his hand rather than the checkers was sweet and romantic. Her face went through about ten different expressions there- very impressive work with no words from Daniela Ruah. But hmmm, between the promo for next week with Kensi looking out her window, and her reference here to holding a gun, I’m a little worried the mole is going to come for her (they did leave her the poisonous plant last time). Should be exciting!

Come back later this week for a new Surf Log and Journal, plus the Edit and Drabble of the Week. We’ll also have a special Thanksgiving fan fic and this weekend the Classified Preview of “Sirens”. (The Top 3 is taking a week off but will return in December with the Top 3 Deeks Undercover Roles.) And if you celebrate, have a wonderful, restful, family-filled Thanksgiving.

In the meantime, what did you think of “Glasnost”? Am I too hard on Callen? Do I need more of a sense of humor about Eric in the field? And exactly how wonderful was that Densi scene?