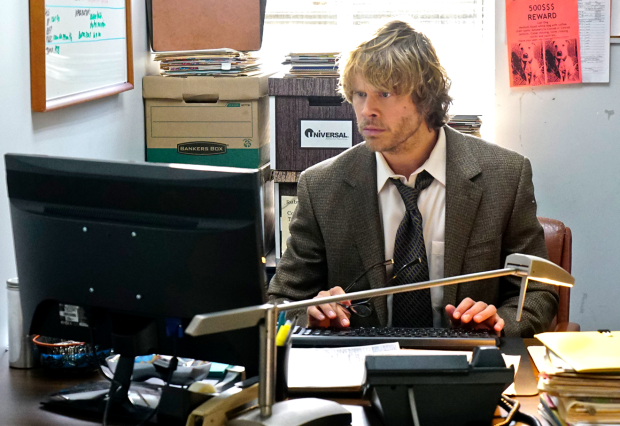 We’re coming down to the NCIS:LA home stretch and although Densi fans finally got to see their fairy tale romance become a reality, it’s overall been an unremarkable season so far. The May sweeps is about to begin and there seems to be a Russian connection to the final few episodes which started with last week’s episode, “Beacon”. Unfortunately, it looks like we are probably not going to get any more Deeks and/or Densi insight this season. After some speculation that a Deeks backstory would be revealed, it doesn’t look like that will be the case. So will Season 7 be the year of Deeks? I guess we will just have to wait to find out. But for now the team is off on a domestic mission to search for a former Marine who has escaped from a veteran’s hospital and may have ties to an extremist group. Gil Grant penned this week’s script and collaborated with director Robert Florio to bring us this week’s episode, “Field of Fire”.

Ah, the patter of little feet! And I’m not talking about our dashing LAPD detective! But does Deeks really think he’s going to find the time for a mentoring program in his busy schedule? Although I can definitely see him becoming a wonderful big brother, it’s kind of a strange activity to introduce into your precarious lifestyle particularly with an IA investigation going on and having to navigate a delicate romantic relationship with your partner. But Kensi is definitely proud of her man who can’t wait to pass along his life experience to the next generation… just as long as she doesn’t have to be the mother of said children. (Of course, our fun-loving Deeks is always able to interact with kids well because he obviously considers himself a kid too: Kensi: We’ve all been fifteen once. Deeks: Still am!). But the underlying theme of this week’s episode seems to center around the joys and tribulations of mentoring kids and becoming parents. While Deeks and Callen like to believe they’re up to the task, Sam bemoans the effort it takes to stay sane and evidently awake when you become a parent. Kensi, on the other hand, looks like a deer in headlights every time someone mentions having kids around Deeks. OK, we get it; you’re not ready yet, but I can’t wait for the conversation when Deeks announces he wants to start having those little Ninja Turtles! You can run, Kensi… but you cannot hide!

Frankly, I’m not sure what to write about these kinds of episodes anymore. There was some great tension build-up and excitement in the final action sequence as they stop the assassination attempt and save the Marine sniper. Yet I feel that there was something missing. I’m becoming a bit apathetic and indifferent as we watch the latest in a series of extreme leftist groups that the team is sent out to eradicate. Isn’t there something else new and unique that they can write about? The disturbed Marine is actually the one who has the story to tell. If this was an NCIS or even NCIS: New Orleans episode, they would have concentrated more on his story and less on the terrorists and we could have gotten a much more character driven, emotional tale. Even Sam’s attempt to make his teammates and the audience understand the Marine’s plight was just not enough. Maybe 43 minutes is never going to be enough time to tell the whole story, especially when dealing with the human condition.

• Little lower case g’s running around? That’s got to be one of Sam’s more memorable lines!
• Talk about cracking me up….Neric’s comedy routine got a big laugh with Eric’s description of the getaway cart prompting Nell’s droll reply… wait for it: He’ll be here all week, folks! Love it when the nerds make me laugh!
• Sam’s heart to heart with the homeless guy was very sad but a very poignant scene. More please!
• There was a lot of ‘having kids’ banter in this episode. Sam just can’t wait for his teammates to experience the joys of parenthood so they can know what it’s like to go crazy too!
• I think Hetty was speaking from experience when she tells Deeks his new ‘little brother’ is going to be good practice for him when he becomes a dad. Hetty, of course, is the ultimate mentor. With all her background adopting future NCIS agents, she certainly knows how hard it is to predict what the future will hold for her difficult protégés.

Hetty: I think Mr. Deeks cleans up quite well, don’t you?
Granger: It depends on your standards but I get where you’re going.

Sam: What’s that… your first mug shot, Deeks?
Deeks: Why? Because he’s got style by pillow hair and he’s smirking? Actually that does kind of look like me!

• Surfing, fish tacos and the Three Stooges. Deeks loves the simple things in life and it doesn’t take much to make him happy. In many ways Deeks is a simple man.
• Always enjoy watching geeky Deeks although this was a much more serious version of his previous undercover personas than what we have seen in the past… but I’ll take it!
• I don’t think there is any coincidence that his undercover disguise goes by the name of Mr. Rogers, do you?
• I just love watching Deeks run. All that Viking mane flying through the air. Magnificent!

• Deeks is thinking about becoming a father again and on that note, did you notice how fast Kensi ran back to her desk to distance herself from the topic? All I know is Kensi doesn’t want to go there… at least not yet.
• I don’t think I’ve seen Densi so unable to get a word in edgewise with the street merchant, Mr. Patel. The expressions on their faces were priceless, especially when he pulls out the Spidey lingerie. Kensi is not amused! For reals reals! Terrific Densi scene.
• Granger continues to be worried that Afghanistan is still affecting Kensi’s ability to ‘take the shot’. But I loved when Deeks repeated Kensi’s words to his boss that ‘she’s good’. No one is going to second guess his girl! (Deeks: That was a hell of a shot, partner.) This time it’s Deeks’ turn to be proud.

Obviously, this episode has nothing to do with the upcoming season finale and the Russian connection. But why throw this episode in the middle particularly after last week’s Arkady connection and the impending season finale episodes? Why not have an interweaving storyline that continues through to the end of the season? I guess I’ll never understand the method behind the madness. Sigh.

We have one more week off and then will return for the last two reviews of the season. Fingers crossed we get something meaty to really sink our teeth into! We have a Deeks’ Surf Log and Kensi’s Journal this week and another Writing Deeks as well! Check them out! See you next time!

Diane Volpe is a Contributing Editor at wikiDeeks.com.