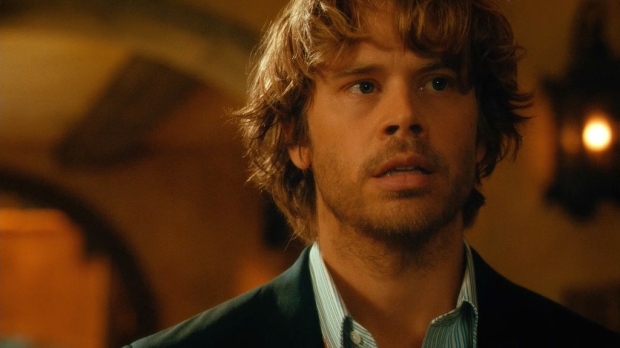 Ah, to be in charge. To be the showrunner and control the stories of NCIS: Los Angeles. What power! Alas, it’s a power none of us will ever know. But just for today (and maybe next week), let’s pretend that we are Masters of the NCIS:LA Universe. What are the Top 3 existing scenes we’d go back in time and re-write?

I have to admit, as much as I love the show, I had no problem coming up with a lengthy list of candidates for revision. The only rule I held myself to was that the scene needed to be Deeks or Densi focused.

Several wish fulfillment themes emerged among my semifinalists. Some involved a wish that Kensi would not have abandoned Deeks when he needed her, that she would have been nicer to him, or that they would have communicated better (I know, it’s not how they roll). Another major theme was a frustration with Hetty’s lack of forthrightness, or anger over her treatment of Deeks. There were a few scenes where an interruption really upset me, one where I wanted to see more emotion from Deeks, and one where I just wanted to see a few more seconds of Surfer Deeks (yes I am just that shallow). Finally, there were a couple that didn’t fit the criteria of being Deeks or Densi-centered, but they involved such egregious canon inconsistencies they still jumped into the list of semifinalists anyway.

So out of the 15 scenes I most want to change, almost half (7) come from Season 5, including all of my Top 3. And to think I actually liked Season 5! This makes me realize what a roller coaster of emotions it was. In reverse order of importance, my Top 3 is…

This episode ranks among those I find most frustrating, and it’s almost completely because of this final scene. The scene, with its infamous metaphor extravaganza, wasn’t annoying merely because Deeks and Kensi couldn’t communicate like normal people. It also discouraged me greatly about the direction Densi was taking. Deeks, who had always pushed forward with Kensi, was the one to pull back. I did not understand his decision, and the lack of a clear explanation left me feeling that the showrunners had simply chickened out of putting Deeks and Kensi together. I didn’t know if they’d ever really pull the trigger on their relationship.

What would I do differently? Most importantly, Deeks wouldn’t pull back on their relationship. He’d embrace the fact that Kensi wanted to talk more about their Thing, and they’d move forward together. Kinda like the “Humbug” All In talk. Or, he might express concerns, but he’d do so without knives or raccoons. Instead, he’d share that he was capable of doing terrible things to protect women he cared about. Maybe he’d even share with her his experience in Afghanistan that seems to have been foremost in his mind. He’d allow Kensi to reassure him, and their relationship would become stronger as a result. Oh, and Deeks would open every last box within a box while Kensi was there with him. We’d do away with this frustrating mystery once and for all. I know these two were not good communicators at this point in their relationship, but I would have preferred seeing them stumble their way through a conversation about real feelings and experiences, rather than exchanging symbols in a way that I just don’t think real people do.

NCIS:LA is infamous for having two characters (most often Kensi and Deeks) interrupted by a third party before they’re able to communicate something meaningful. For me the most upsetting example of this, the one I’d most like to change, is the final bullpen scene in “Ascension.” Traumatized Deeks is sad and lost like we’ve never seen him. Kensi isn’t able to say much to help him, but then he gives her the most amazing gift, explaining that thinking about her helped him endure Sidorov’s torture, “for what it’s worth.” This line breaks my heart every time I watch it. I see it as Deeks assuming the kiss on the hillside wasn’t important to Kensi, that she doesn’t love him as he loves her (and as he in so many words tells her here). Then Sam and Callen show up and Kensi loses her chance to say something- anything- to reassure him, to comfort him.

In my rewritten scene, Sam and Callen would never show up. Kensi, who had just started walking towards Deeks, would continue. She’d march right up to him and wrap her arms around him. She’d offer some encouragement, let him know that his words were worth so very much. She’d tell him that she understood why he wanted to get away from everything and everyone, but that she wouldn’t let him get away from her. They are partners, after all. She’d insist on being there for him. As a result, he wouldn’t withdraw from the entire world. Of course, then we wouldn’t get my all-time favorite scene, the end of “Impact,” but Deeks would have been taken care of, and that’s more important. Would any of this have been out of character for Kensi? Maybe, but I’d like to think that she would have let some of her fierceness and loyalty shine through and garnered up the determination to help the man she loves.

Yes, one of our favorite episodes to debate and discuss. I’m stretching the definition of “scene” here just a bit, and using it to change everything that happened at Ops after their operation was done, from Kensi getting the news of her reassignment all the way through to the credits. As written, it presented multiple issues for me, particularly regarding Hetty. First she reassigns Kensi without explanation or even time to wait for Deeks to say good-bye (when clearly there was no earth-shattering reason for her to need to drop everything that second and go). It was incredibly cruel. Then she hands Kensi the clean shirt, as if to say that the reason for the reassignment was her inability to handle sleeping with Deeks. Then Kensi leaves without questioning anything, or asking to wait five minutes to see Deeks. Finally, Hetty does nothing to reassure Deeks, who’s left abandoned and thinking he’s at fault for what has happened.

I would change just about everything about the way this episode ends. There’d be no shirt. Hetty would take Kensi into her office and tell her about her new assignment. She’d come clean that she’s worried about a friend of hers, a friend who Kensi knows. She’d tell Kensi about Jack. Kensi would be shocked, but better have her shocked here than when she had Jack in her rifle sights. Maybe she’d even share with Kensi more information about how long she’s known Jack, and whether she had known him when he was engaged to Kensi. Why not get everything in the open? It wouldn’t have taken anything away from the drama of Kensi’s assignment. Most of us obsessed types guessed the White Ghost’s identity anyway. For those casual fans, they might have understood more of Kensi’s emotions if they had a better feel for her backstory with Jack.

Then of course Deeks would arrive and have ample time to talk to Kensi, to reassure her, and to say good-bye. Heck, maybe she wouldn’t even leave until the next morning. That could have even given Kensi time to apologize for the punch. And Deeks wouldn’t have been left feeling like anything was his fault. For the record, I don’t blame Dave Kalstein for this scene as much as I blame Shane Brennan. I think you can have conflict and drama and consistent characterization. In “The Frozen Lake”, both Kensi and Hetty took a hit because of their out of character and unpleasant actions. Now, would my version require an extra five minutes or so? Maybe, but if I’m in charge, I say the show can run long on occasion.

There’s so much I’d like to change! Here are a few other examples:

Next week we’ll continue along the same lines, with a discussion of the Top 3 Missing Scenes- these may be deleted scenes that we know about, or they might be scenes that we want to assume happened but were likely never filmed.

I have to say that writing out all my wish fulfillment was therapeutic! I see why fan fiction writers enjoy writing their own version of events. I encourage you all to share your Top 3 below- hopefully you’ll enjoy the process as much as I did.