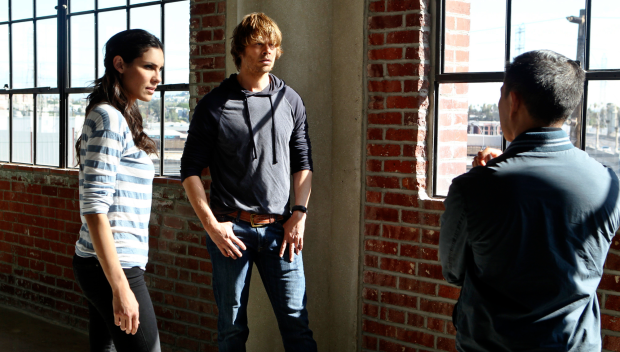 There has been a lot of buzz on the social media circuit surrounding this episode.  Not only do we get to see the return of the fabulous Ernie Reyes, Jr. but we have another Dave Kalstein script that features the first real spat between our lovebirds, Kensi and Deeks. A Densi bedroom scene in the previews helped to send the fan frenzy off the Richter scale as well. No metaphors needed here! For all their fans, the Densi subplot had the propensity to overshadow any real storyline going on particularly with Sam being shot and critically injured by a renegade spy. Do we care? Not really, because there was never any real doubt that Sam wouldn’t pull through in the end. Let’s admit it, the previous Sam/Callen-centric episodes have been just ok. But Kalstein’s gift to Densi fans was allowing us to concentrate on Densi this time around. Grateful for any morsel the writers will send our way, this look behind the scenes was certainly revealing.

Sure, we have seen little nods to the love story here and there but we haven’t witnessed any character development since their ‘thing’ became official. After all these years of waiting for something to happen we have had to fill in the blanks ourselves for the most part. But to actually see the relationship in full bloom was worth the wait… even if it did end with their first tiff. Negative Nelly is at it again and Kensi takes Deeks’ jokes about her friends out of context. Deeks is obviously having fun at her expense but then all of a sudden, according to Kensi, the relationship is moving too fast. Being in love is still a scary thing for Kensi and she still hasn’t figured out yet what is normal in this new love affair she shares with Deeks. We finally get to see how their relationship works outside of the Mission and despite some bumps in the road it’s a Densi shipper’s dream!

Can I also add what a joy it was to see our favorite guest star, Ernie Reyes, Jr. return to reprise his role and get to kick ass on set? His fight scenes are always exciting to watch and the homecoming added a lot more action and fun to this episode. It was also wonderful to see Ernie’s character at the heart of this story while allowing him to display more of his acting chops. His easy going relationship with Deeks quickly took up where it left off in “The Frozen Lake” and I enjoyed their banter and private conversations more than ever. Deeks still trusts his Gurkha buddy and their short-lived reunion warmed my heart.  (Deeks: How’s that blade of yours? Thapa: Sharp. How’s your partner? Deeks: Sharper.) Thapa is still giving Deeks love advice but this time he actually sides with Kensi on this argument.  (Thapa:  It feels real before it becomes real.)  Deeks has to think his advice over a bit but before the mission is over, he will understand.

One of the best scenes of the episode had Kensi seeking out Thapa’s advice on love. This is Kalstein weaving his Densi magic and making me smile. When he is at the top of his game, nobody writes Densi better. Kensi has her light bulb moment agreeing that men just need to listen to women (thank you!) and Deeks unfortunately suffers at the hands of Thapa’s turncoat tactics. Deeks just can’t get a break, but it was a brilliant moment on screen. (Deeks: To be continued, your holiness…)

Deeks gets a chance to continue that conversation in the firing range with Thapa. It’s these moments of reflection that allow our wistful Detective to learn what’s really going on in his heart and in his head. Thapa succeeds in getting Deeks to realize what’s important in his world. In another sweet KungFu/Grasshopper moment, Thapa explains that home is the heart, which Deeks always knew deep down inside. He will need that memory to evoke the wise words of Thapa as he steps slowly into his future with Kensi. As the episode fades to black, I am reminded at this point there is no one in the world who can play Deeks better than the incomparable Eric Christian Olsen. He goes from glib one liners to an emotional declaration of love so effortlessly. He can turn a scene around on a dime. The emotion that emanates from Olsen in the final moments of the show was so memorable and heart breaking that it left me stunned and teary eyed. One of the best ECO scenes ever. I hated to see Thapa killed off at the end but to get these kind of sweet emotions from both Kensi and Deeks… it was worth it.

This is Terrence Nightingale’s first time in the director’s chair for NCIS:LA but he already has numerous credits to his name as a cameraman on the show and his work here was commendable. There is no doubt he understands the heart of this procedural and can convey what’s on the written page. Since I have officially declared this my favorite episode of the season, I’m more than satisfied with Nighingale’s first time efforts. This might also be my favorite Kalstein script after “The Frozen Lake” as well. Only Dave can make me laugh and cry and stop my heart from beating all in one hour. He has restored my faith and proved my constant assertion that when you concentrate on these characters and not the storyline then you have one hell of a show!  Thanks Dave.

Kensi: You don’t even remember their names…..

Deeks: Kat, Mindy, Mandy, Tiffany and Tiffany. How can you forget such a pantheon of crazy girl names?

Deeks: As much as I would love to wrap up today with two Gurhkas singing “Give Peace a Chance” over a pitcher of beer, Brother…. I don’t think that’s going to happen.

Kensi: What did he just call me?

Deeks: I don’t know… I didn’t hear it… because there was so much traffic…

Kensi: There was no traffic….

Deeks: …and a truck came by and honked his…

Kensi: Do you think this is funny?

Deeks: Your smile is so perfect… and there it is.

Kensi: You should go home.

We have to wait another two weeks but the show returns with a new an episode entitled “Savoir Faire“.  Join me then for our review and don’t forget to stop by for Deeks’ Surf Log and Kensi’s Journal later this week. Ernie Reyes, Jr. will also join us again for an exclusive follow-up interview to discuss his return to NCIS:LA. We look forward talking to Ernie and sharing it with all his fans out there in the near future.