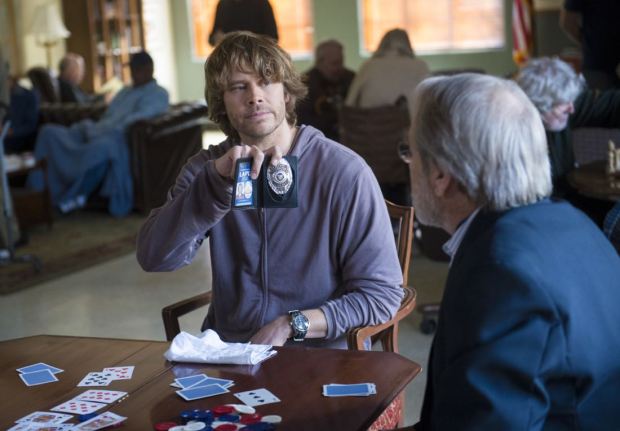 The mole hunt may be over, but the team is still feeling the fall-out in “Old Tricks,” written by Andrew Bartels and directed by Terence Nightingall. The episode combined a lighter than normal case of the week with quite a few nice moments for the team, not to mention a bittersweet sendoff for Miguel Ferrer.

Let’s start with the good news. Finally, Kensi is back in the field! She needed to threaten Nate to get there, but she was more than ready. What were we to make of her joke that Nate was the mole? Was it a gesture to all the fans who speculated for so long? Or am I reading too much into it? I had to laugh when Nate told her that after all the mole craziness, no one on the team should be ready to go back to work. Nate, it’s a little too late to be looking at this show’s non-stop action and carnage in a rational, realistic way! Of course they’re all “permanently scarred and a danger to society,” as Kensi summed up. But hey, at least they can joke about it.

How great was it to see Kensi back in the bullpen with her team? Finally things are back to normal. Too bad Deeks didn’t get to be there to enjoy the moment- I can just picture the happy look he’d have had on his face. It would have been nice to see a little something more between Deeks and Kensi before they arrived at the retirement home, but I can live with Deeks’ “And she doesn’t miss a beat”, which captured a little of the good vibes they both must have been enjoying.

Kensi couldn’t have asked for an easier first case back, where the biggest challenge was chasing down a “slow walker.” Definitely not too stressful! How fun were Martin Mull and Debra Jo Rupp? The poker scene was delightful, as were their conversations in the boatshed. Eddie sizing Deeks up immediately (“You talk too much”), Ginger showing their mark a good time “if you know what I mean,” the two educating Deeks and Kensi on the Dark Web. It all made me laugh. For a moment when they started quoting 60 Minutes and then bickering, it absolutely felt like they were channeling my parents. Too bad the duos had to “part ways” at the end. It would be great to see them come back. Maybe the foursome could start their own sitcom? You know Eric Christian Olsen would have a field day doing comedy with those two. They are the kind of talented guest actors we want to see.

Eddie: So, Beach Boy, you folding or what?.. You’ve got guts, kid. Maybe another time.
Deeks: I did not see that coming and I really, I really needed that money ‘cause my uncle, well he’s got the scurvy…Oh, what is this? Cards inside your napkin. I mean, that’s a pretty great grift, but the key to this whole thing gentlemen is right there, because while Eddie was cheating, Ginger here was distracting you.
Ginger: Did it even work on you a little, Handsome?
Deeks: I mean, you are a stone cold fox, but I got a ladybird.

As Eddie and Ginger left the boatshed discussing the need for the men’s room, Kensi and Deeks turned to look at one another. I couldn’t help but think that maybe they saw a little of themselves in Eddie and Ginger. Perhaps it felt like a glimpse of what their relationship will be like in another 25 or 30 years?

The episode felt a bit disjointed to me, with lots of seemingly unrelated things happening. We had the case of the week with its veteran victims, Nate popping up to meet with half the team, Sam off with yet another partner swap, Callen and his family, and Granger’s fate. Aside from Sam’s partner, none of it fit with the case, but taken individually, each element worked.

The many small moments with the tough old veterans were enjoyable, such as when they blew up Louis Miller’s oxygen tank, when Deeks gave Captain Westbrook Hetty’s secret password, or when the vets on the bus took out the bad guy and exchanged salutes with Sam. Sam’s Secret Service partner may have been on the serious side (not what you’d want if you’re trying to balance out his personality), but at least Marsha Thomason did a good job in the role (unlike certain other guest actress law enforcement officers I could name).

We had two different revelations from Eric and Nell. One was that Nell and Nate used to date. At least, I think that’s news? I only remember that Nell knew Nate before she came to work at OSP, but I didn’t think they had ever told us more? The other was that Eric’s been seeing Nate for therapy. And apparently so has Nell. For all we know, Deeks is still seeing him too. Wouldn’t it be funny if everyone on the team was secretly talking to him? (It sure would place him perfectly to be the mole!) But seriously, I very much appreciated the Neric scene where we got a glimpse of the toll their job takes. We learned that despite his in-the-field bravado, Eric is actually having some trouble dealing with it all, including the drone strike he ordered to save the team in Syria. Could all his over-the-top macho craziness be overcompensation for his fear and dread? OK, that’s probably giving the writers too much credit, but I sure would like field agent Eric’s behavior to make more sense.

And then there’s Callen and his family. Garrison sure is hard to warm up to. It was easy to feel sympathy for Callen throughout, trying to keep his dad from doing anything too terrible while also trying his best to form some sort of relationship with the guy. It was great that he decided (with some helpful advice from Hetty) to move forward with getting to know his half-sister and nephew. It bodes so well for his future and I was happy for him. The kind of character growth we saw here with Callen, as well as the vulnerability shown by Eric and Nell, are exactly what I need in this show; without these kinds of more substantial emotional moments, the formulaic case of the week structure would quickly become boring.

I had mixed feelings about the send-off for Miguel Ferrer’s Owen Granger. I kind of wanted him to actually die so that the team could grieve just as all these actors are doing in real life. On the other hand, it was incredibly moving to think of Granger setting off to make peace with his daughter. She was a guest actor I had always hoped to see more of (and still do); the “Granger, O.” episode in which she appeared is my favorite Granger episode. He showed so much vulnerability and yearning for what might have been in that episode and his performance really touched me. We might not get to see their reunion, but we can imagine it and be happy for the fictional character, even as we mourn the loss of the great actor who played him.

Come back later this week for the Surf Log, Kensi’s Journal, and the Drabble of the Week. And you all will be spared from my ramblings for the next couple of weeks as my fellow wikiDeeks contributors Brenda and Randy will take on the review duties for the next couple episodes. Here’s hoping they’ll have lots of exciting developments to discuss!

In the meantime, what did you think of “Old Tricks”? Were you dismayed by the lack of Densi? Did you enjoy the guest actors? Exactly how many team members do you think are seeing Nate?