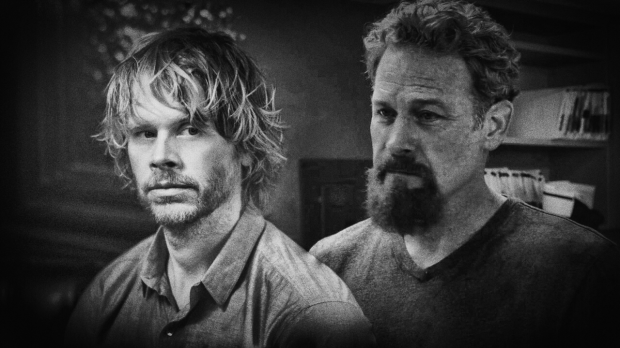 Deeks looked at the report he’d just finished on his laptop before closing his eyes and letting out a shaky breath. He was finally alone after convincing Kensi to accept a ride home from Callen. The needed privacy allowed him to recall what he thought were going to be the last moments of his life. His hand trembled slightly as he once again pulled the small knife from the pocket of his jeans. He stared at it and huffed out a soft laugh, knowing just how desperate the situation had been. He hadn’t expected to live through that firefight. The ricochets alone should have killed him. The cold thought unsettling him once more.

He hadn’t told Kensi any of it. Her experience had been rough enough without her finding out her fiancé had come close to dying. Turk had saved all their lives in Mexico, and he thought he had evened the score until the man left him to fend for himself in an overmatched gun battle. Facing death left him with an empty feeling, as if there was no air left in his lungs, no life left to live. Anger was the only thing left to fill the void, at least it had been for him. David, the man Kensi had comforted in his last moments, had chosen to remember the love in his life, and that had touched Kensi deeply. He didn’t want her to know that his reaction to facing death had been anger…anger that he wouldn’t get to live out his life with her. The starkness of that reality had stunned him in that moment, his anger slowly overwhelmed by deep sadness as he’d stared at the knife in his hand, a last line of defense that now seemed laughable.

“Never bring a knife to a gun fight,” he whispered as he watched the light glint off the blade.

“Jim Bowie had one at The Alamo,” the familiar voice catching him unawares.

“As I remember right, his was bigger and he died there,” Deeks growled.

“Yeah, but he probably took a few men down before he did,” Turk said as he leaned against the edge of Kensi’s desk.

“Little consolation don’t you think?” Deeks asked, not even trying to keep his tone civil.

“Like I said, I had complete confidence in you,” Turk replied.

“Bullshit,” Deeks shot back. “You only had one thought. Revenge. What might happen to me didn’t enter your mind.”

“Maybe so,” he replied softly. “Maybe I was a little out of control…”

“Yeah, you were, and I almost paid for it,” Deeks shot back.

“I couldn’t let him get away, Deeks. I told you what Naser did to Ronnie. I loved that guy. He was my partner,” Turk said.

“You’re right,” Turk agreed. “Listen…if it’ll square things with you…I apologize for putting you in danger. And I’m glad you made it out okay.”

“Thanks to Callen and Sam.”

“Just so you know, I woulda put petunias on your grave,” Turk said lightly.

“No…just can’t understand why you like petunias,” he replied with a slight grin.

“Sounds like you’re still holding a grudge,” Turk said. “Listen Deeks, I don’t expect you to understand. I should have been there when Ronnie was taken. I felt responsible. Still do. So I wanted Naser dead in the worse way. It was all I could think about.”

“You shouldn’t,” Deeks said quietly. “The burden of killing him would have been harder to live with than you know.”

Turk stared at him, assessing what he’d said, a question obvious in his eyes.

“Not really,” Deeks said as he got up and grabbed his jacket.

“I shared something damn personal with you…partner,” Turk replied. “Whatever it is you’re holding back won’t leave this room.”

“This room has ears…partner,” Deeks answered, irritated by the man’s attempt to play him.

“I’ve known Hetty a long time,” Turk said. “No way she doesn’t have someplace in this building that’s safe from prying eyes and big ears.”

“I’m also pretty sure she has an expensive bottle of scotch tucked away somewhere.”

“You afraid of her?” Turk asked.

“She always said scotch was medicinal,” he replied. “So I think she’ll understand.”

Deeks wasn’t sure about that, but he followed Turk when he headed for Hetty’s darkened office. As he watched Turk rummage through a cabinet filled with old tea caddies and tins, he realized how much he missed her. Operating without much oversight had been freeing, but knowing she was solidly behind them if things got complicated, had always been reassuring. Hetty always covered their asses whether she agreed with what they were up to or not.

“Told you,” Turk said as he held up a half empty bottle of Cragganmore. “Ain’t the top of the line, but it’ll do the job.”

“Loosening you up a bit.”

“That’s not something I hear very often,” Deeks replied. “But I’m not a big drinker. More of a beer man.”

“I don’t have all night,” Turk said gruffly. “Now where’s the burn room?”

Deeks led the way against his better judgment, not sure it was a good idea to share what he had done to his own former partner. When he shut the door, he had to smile, noticing Turk had snagged a couple of Hetty’s pretty little teacups. She sure as hell wasn’t going to like that when she found out.

“Now ain’t this cozy?” Turk said as he poured a little scotch into each delicate cup.

“What are we drinking to?” Deeks asked as he took the tiny flowered cup.

Deeks took a small sip of the raw liquor and looked around the room to avoid Turk’s intense scrutiny. He found it hard to broach the subject, so he remained silent.

“You’re not exactly living up to your reputation as a man who can ramble on and on about everything under the sun,” Turk said. “What’d you do, Deeks? What burden are you carrying?”

“Not sure I trust you enough to tell you,” Deeks said, and downed the remaining scotch in the tiny cup.

Turk nodded, accepting the insult, pouring himself another cup of scotch and then just staring at it.

“I’ve been thinking about killing Naser for so long…but when I actually had my hands around his throat…” Turk hesitated and then looked up at Deeks. “I just couldn’t finish it. His life didn’t equal Ronnie’s.”

“That makes you a free man,” Deeks said.

“At the time, I had no choice,” Deeks finally said, letting out a long breath. “I was a rookie detective and my partner was going to kill a young prostitute…my CI. He was dirty, and he thought she betrayed him to Internal Affairs.”

“We fought for his gun…and I shot him.”

“And then covered it up,” Turk said.

“I wasn’t going to let that bastard ruin Tiffany’s life or mine,” Deeks said softly. “What I didn’t realize till later…was that I would never be free of the guilt or the consequences.”

“I’m not,” Deeks hurried to say. “He was my partner, but I wasn’t going to watch him kill a teenage girl right in front of me.”

“It was a righteous kill, Deeks,” Turk said.

“Maybe it was, but it still haunts me, just like killing Naser would have haunted you.”

“You’re probably right,” Turk replied. “But what would have haunted me more was if you’d been killed today. You didn’t deserve what I put you through, and I’m truly sorry.”

Deeks put the teacup down and reached out to shake his hand. “You’re forgiven, brother.”

“Don’t think Kensi will be as forgiving,” Turk replied. “Especially after dragging your ass all over Mexico.”

“Well, that gives me a head start anyway,” Turk said.

“Watch your six,” Deeks warned with a wide smile.

“Anybody else I should watch out for?” Turk asked.

7 Comments on An Understanding