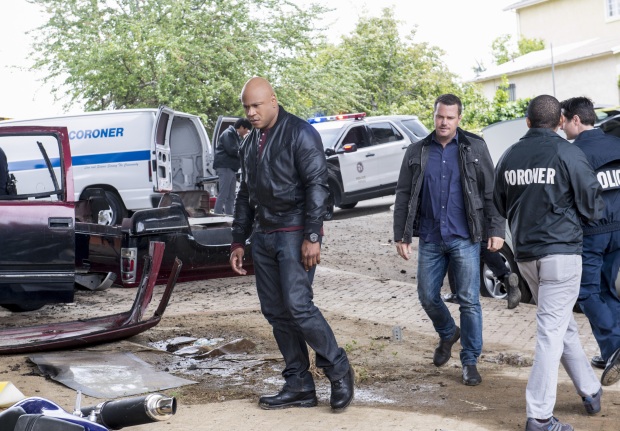 Last week’s excellent “Battle Scars” ended with a bit of a cliffhanger as the team learned that their $40 million in gold had been stolen. “Golden Days,” written by Joseph C. Wilson and Lee A. Carlisle and directed by Ruba Nadda, continued the banter-filled case but also introduced some major drama in the form of Detective Ellen Whiting, coming back from her near death experience to haunt Deeks.

As soon as I saw Deeks’ confession to Whiting in the “Previously On,” this whole episode took on a different tone for me. I had anticipated more fun with the old guys and just maybe, a Densi proposal. Instead I was immediately filled with dread. That’s actually not a bad thing in my book, but it did make it harder to focus on the details of the case or even to enjoy the banter as I worried about what might happen to Deeks. It also might have contributed to my take on that banter, which didn’t seem quite as consistently hilarious as last week’s, with the exception of the wonderful stake-out scene.

Still, Carl Lumbly as Langston, John M. Jackson as Chegwidden, and James Remar as Bridges continued their strong work. The absolute highlight was Bridges trying to wrap his hand around Sam’s bicep. I’m still laughing as I think about it now. LL Cool J’s reaction was hilarious. Bridges’ unconventional ways played off of Sam’s by-the-book seriousness so well. It made me think about Deeks’ similar outstanding chemistry with Sam. I loved when Sam and Callen recognize the antics of their elders and swear to prevent one another from ending up the same way. Still, I’m betting it’s exactly how they’ll end up, pact or no pact.

Also enjoyable was hearing stories about Obi-Wan AKA Owen Granger. I bet the team would love to hear more from these guys about what it was like working with a young Granger. And I’m totally on-board for the spin-off where his remaining teammates help vets and kill bad guys!

Before Detective Whiting pops up to ruin everyone’s mood, the episode opens on a close-up of Deeks in the gym. It’s quite reminiscent of the opening of “An Unlocked Mind,” and just for the record, I’m fine if every episode starts this way from now on. This scene might not have been as flirty as the previous yoga scene, but it was enjoyable nonetheless. Enjoyable, that is, until things take a nasty turn with Whiting’s text to Deeks. Eric Christian Olsen portrays Deeks’ stress perfectly here. His swearing as he walks away clearly communicates his anger at the situation and his frustration that this event from his past still hangs over his head.

But it’s Daniela Ruah’s Kensi in the follow-up scene who made me tear up when she reassures Deeks that he isn’t alone. It may be the nicest thing anyone has ever said to him, for I think he’s felt alone much of his life. Deeks’ expression while sitting at his desk reminded me of the “firing” scene from “The Debt,” where he just looked so lost. Here, Kensi’s public display of affection, almost unable to tear herself away from hugging him in the middle of the bullpen, is so sweet and caring – and such a contrast to her complete inability to express her feelings from that long ago (Season 3) episode. To top things off, she expertly takes a trick from Deeks and uses humor to defuse tension, joking about not wanting to have to break him out of jail and spend their lives “on the lam.” Deeks clearly feels so down, and having Kensi express such open support has to mean a lot to him. It did to me as a fan, and it’s one of my favorite scenes of the season.

Kensi: My dad always used to tell me, when I had a problem, he would say, “Line it up in your sights, and then take it out before it has a chance to take you out.”
Deeks: Your dad was a gangster. Also he probably would have shot me.
Kensi: I think he’d love you.
Deeks: But he’s right.
Kensi: You want me to come with you?
Deeks: No, I don’t want to wrap you up in this again. I think I’m just going to do it alone.
Kensi: You’re never alone, Deeks… But also, please make sure you come back this time because I would hate to have to break you out of jail and live the rest of our lives on the lam.
Deeks:  Is it crazy if I say that sounds pretty awesome right now? [Kensi hugs and kisses him.] Just you and I, open road, eatin’ street tacos, lots of ice cream, robbing banks.
Kensi:  I love you so much.
Deeks: I love you too.

Then there’s the major revelation that Deeks had previously told Kensi about his confession. I have such mixed feelings about this. First, it’s great that he’s been so honest with her and has honored the “no more secrets” promise he made. It bodes well for them that he didn’t hide this from her. But on the other hand, I’d have loved to have seen that conversation! Overall though, this is definitely good news for our favorite couple.

The return of Detective Whiting, played so well by Karina Logue, brought back an interesting character who thankfully wasn’t killed off in “Under Siege,” lest we lose a good opportunity for an angst-filled Deeks storyline. In this episode we briefly get to see her slightly warmer side as she thanks Deeks for saving her life, expresses concern over her role in finding kidnapped Kensi, and talks about her family. On the other hand, she lets Deeks twist in the wind for quite some time before getting down to the real reason for their conversation. The reason I enjoy her character is that even though she’s not totally likable, she’s been consistently written, she’s trying to do the right thing, and I respect her determination and smarts. I think Deeks does too. He hasn’t been able to fool her- she sees him for who he really is.

Whiting’s uptight affect provides a wonderful foil for a shaggy, possible murderer like him. Could they ever work together as partners? That’s why it was so intriguing to hear her talk about trust. She apparently trusts him to assist in her investigation, meaning he’ll have access to information that could cause great harm were it to get into the wrong hands. In turn, does that mean Deeks can trust that she’ll really close the investigation if he helps her out?

I felt for poor Deeks throughout. He looks like he’s on the way to the dentist as he approaches Whiting’s car. It’s understandable. Thanks to his confession – and let’s not forget Hetty’s meddling – Whiting now has quite a bit of power over Deeks and she’s more than willing to use it. Their conversation is very well written and suspenseful. Would Whiting arrest Deeks? Had she remembered his confession and would she bring it up? Is she recording the whole thing (probably)? Deeks’ expression of misery throughout made me feel how awful it was to have to sit there and pretend like this was a normal conversation. Whiting is holding so much over him and I felt the weight of it all throughout the episode.

It actually looks like we’ll get to see Whiting holding Boyle over Deeks’ head for some time to come. Her request for his assistance uncovering corruption at the precinct was totally predicted by many of you- well done people! I’m unhappy to hear that Lieutenant Bates is one of the subjects of her attention though; I’ve always enjoyed his character and it would be a shame to take him down. Did Deeks’ advice to Whiting to take the allegations against Bates seriously mean that Deeks thinks Bates may be corrupt? I’m hoping his investigation will clear him, just as he did in “The Debt.”

I do love Whiting’s general blackmail scheme plan because it means she’ll be back in Season 9 with what I assume will be a juicy Deeks plot. Might it even tie into a “Deeks, M” episode? Might it lead to Deeks becoming an agent? Only time will tell. One other result of this new development may be that we never get to hear the details of how Boyle was killed, a story story that may not be relevant once Whiting closes her investigation.

In the short term, I hope this all frees Deeks up to be able to get that proposal done! I’d like to think that he’s hesitated to go for proposal number four because he’s been waiting to see what Whiting would do. Now that he has her assurance that he isn’t going to be carted off to jail for murder, hopefully he’s ready to pop the question. We’ll just have to keep our fingers crossed that Frank Military or R. Scott Gemmill can give it all the time it deserves in the midst of the upcoming Rogue Sam two-parter. These two writers did a fine job with Deeks’ previous three proposals, so I feel we’re in good hands. Think of it this way- how many fandoms get to enjoy four wedding proposals from their OTP? Seriously, if they can pull off four unique and moving proposals for the same engagement, I will be both impressed and thankful.

Stay tuned people- next week begins the final two-parter to end Season 8. Will Sam going rogue and the return of Khalid provide more drama than I’m currently anticipating? I shall try to have faith that my favorite writer, Frank Military, will bring home plenty of angst even as he squeezes in a few minutes of happiness for my favorite couple.

Be sure to come back later this week for Deeks’ Surf Log, Kensi’s Journal, and the Drabble of the Week. Plus Sweet Lu is helping me out with a great post-ep fan fic. In the meantime, what did you think of “Golden Days”?