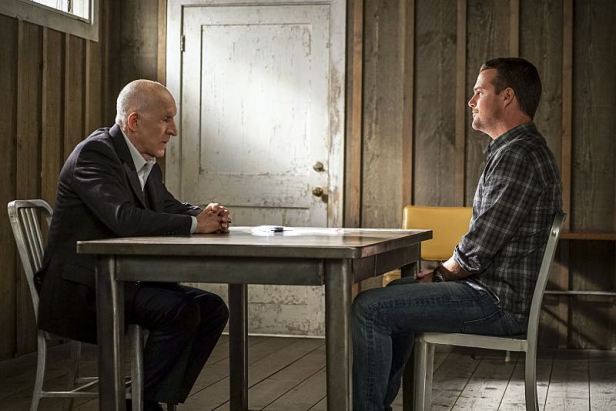 What CBS is telling us: After Callen’s father, Garrison (Daniel J. Travanti) is found in an NCIS patient’s hospital room during a radiation poisoning case, Callen must take him to the boatshed for interrogation. Also, the team discusses their Thanksgiving plans, on NCIS: LOS ANGELES.

What we think is happening:  Guest thoughts from the episode’s director:

Full week of prep on E809 complete. #jpkteaser It's all about legacy and mythology! #ncisla #grateful Outstanding script!Thx @bartelsand

And from the episode’s writer:

My more pedestrian thoughts:  I’m confused by the wording of “NCIS patient’s hospital room” – is this is a person of interesting to NCIS, an NCIS agent (not Kensi) or informant, just not sure.

Every episode is just a little better with Arkady.  He was last seen stuffed into Hetty’s Jaguar in “Exchange Rate” last season.

India de Beaufort plays Radha on Younger, was Jules Jackman on Blood & Oil, Layla Roslyn on Chicago P.D., India on Necessary Roughness, India Jordain on Jane by Design and Miranda Stone on One Tree Hill.  Had guest roles on Chuck, Castle, How I Met Your Mother and The Night Shift.

Severance wrote about getting the role at her website.

Was Navy Petty Officer Third Class John Blaney ‘JB’ Hicks in season 12’s “Semper Fortis” of NCIS and appeared in episodes of Looking, Scorpion, How To Get Away with Murder, Fuller House, Colony, It’s Always Sunny in Philadelphia, Rizzoli & Isles and Rush Hour.

Just finished filming a guest starring role on the huuuge CBS drama NCIS: Los Angeles!! I'm so grateful that hard work is paying off. My mom, dad & sister are in my corner DAILY. And my agents Tom & Lauren, and manager Steve constantly push and claw to get me opportunities and it doesn't go unnoticed. Thank you friends back home for always throwing positive support my way, I really do appreciate it. God gets the glory. #NCISLA #Dream #Thankful #IMetLLCoolJ lol

Yaegar is back from last’s week’s “Parallel Resistors”.

ON SET! Can't talk about the role or the project much but I can show you my character's name and trailer. :). As a hint, the show is very popular, has been on for a while now and it will be a lot fun. When I get air dates I can tell you what the show is but until then, let's see your guesses and see which one of you guesses correctly!

Played the same role in “Drive” in season four.

Fedor was the man Kensi, Deeks and Eric arrested at the request of Arkady’s protege in Russia during “Matryoshka” Part Two – a dangling storyline I’m happy to see picked up in season eight.

MacDonald is back from last’s week’s “Parallel Resistors” as Kensi’s physical therapist.  This looks to be her final appearance in this storyline according to the graphic she put out to promote her role in “Crazy Train”.

Appeared in episodes of Fameless, Baby Daddy, Scorpion, Maron, About A Boy, Shameless, Freak Out, Deal With It, Clipaholics, Betty & DD, Not Safe For Work, 10 Things I Hate About You, Entourage, Happy Endings, Southland, Smile, You’re Under Arrest, Do Not Disturb, Casanovas, Scar Tactics, Prom Queen, Hi-Jinks, ER and Come To Papa.

@bartelsand Thank you Andrew, for the beautiful and thoughtful script. It will definitely go down as one of our best ever! #ncisla

This photo is from the week of shooting Daniela Ruah’s hospital/rehab scenes before her maternity leave.  I think we can all agree – that sign is amazing!

Writer Andrew Bartels gave his Twitter followers a big hint about who will be the featured character in the episode:

Filming was done in a cemetery:

My Friday homage to @larryteng Keep the camera moving. pic.twitter.com/FRnwAYT8JM

Some quality time in the boat shed in this episode:

Sam Farmer is a sports writer for the LA Times.  He also had the program shooting by his home:

Eric is trying to hard.

Not a happy reunion.

Possible Sports Related Delays:  CBS has a full doubleheader this Sunday with almost all of the country getting the Philadelphia Eagles at Seattle Seahawks game but some viewers will see the New England Patriots at the San Francisco 49ers.  I will update the start time if there is a delay (there is a planned 8:30PM ET/7:30PM CT start for this episode) in the comments section Sunday night  Other places to find the start time include the show’s official Twitter account (@NCISLA) and CBS’s official twitter account (@CBSTweet).