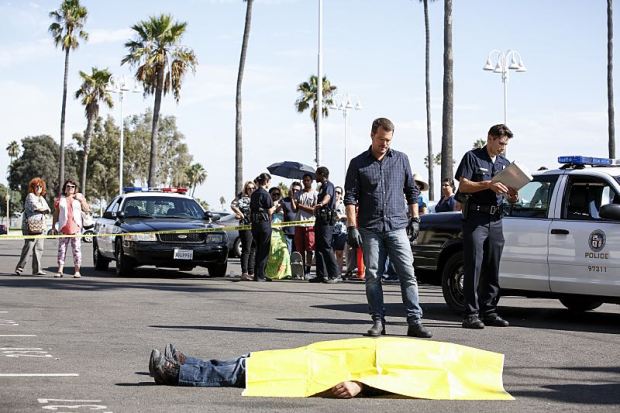 Episodes of NCIS: Los Angeles can be exciting, funny, or even frustrating. In the hands of a writer like Frank Military, they can be dark and dramatic. But they rarely make me truly sad. This week’s episode “Crazy Train,” directed by Diana C. Valentine, did just that. And I think that’s a compliment, one that goes to Military and showrunner R. Scott Gemmill, who was responsible for the Densi scenes.

One of our coworkers was found inside of a shark

Before we talk about the sadness, let’s cover this week’s case, particularly Callen’s undercover op in the mental hospital. You know I always prefer undercover assignments that come with actual undercover acting- an alias that requires the character to act like a different person. Here we just got Snarky Callen being snarky, but he was nevertheless pretty entertaining, particularly when he dismantled the doctor running the group therapy session. And the two patients who started out hating on Callen and then grew to love the guy were goofy and funny- Who’s sayin’ I’m aggressive? I don’t even talk to half you people! They provided the lightest part of the episode. The whole caper reminded me of the slightly silly version of Frank Military we got with one of my guilty pleasure episodes, “SEAL Hunter.”

Of course, this episode also included Callen getting fed to the sharks. His joking around the whole time made it hard to be too worried about him. It was unfortunate that the sequence had been included in the promo the week before. Since we knew Callen would end up in the ocean as shark bait, it took away some of the suspense when he and Dill/Leipzig were being hunted in the hospital- we knew Callen wouldn’t get away.

I wanna spend the rest of my life with you

The case of the week might have been lighthearted, but the episode had two sources of major sadness for me. The first was having to watch Kensi, and Kensi and Deeks, struggle. Kensi is still grappling with her physical limitations (I think she’d benefit from some group therapy with the other patients). Of course she wasn’t going to take the physical therapist’s advice to take things slowly. How sweet was Deeks though, when he reacted to the reason for her injury with a smile and a “Thatta girl”?

Part of what made that courtyard scene so hard to for me watch was how Deeks struggled to get Kensi to even smile. He’s always done that so effortlessly, and it just shows what a dark place Kensi is in that he can’t quite reach her to pull her out of it. You don’t get much darker than wishing you’d been left behind to die in Syria. Yikes. I could see why Deeks decided on an impromptu proposal number two in his desperation to make her feel better. Alas, it was an ill-advised strategy as of course she didn’t want what she likely felt was a pity proposal.

What I saw as an improvement in Deeks’ communication this time, compared to last week, was how he managed to maintain his optimism (You are gonna live happily ever after, okay?) while also acknowledging more realistic possibilities. I knew he’d want to be with her no matter what, but it is something Kensi needs to get through her head and heart. Looking on the bright side (?), how many fans get to see their OTP have three separate proposals? (There will be another one, right? Maybe at Christmas?) Or does this not count as a proposal since he never got to actually ask the question?

Deeks: Kensi Marie Blye-
Kensi: No, no, no. Don’t do this right now.
Deeks: Why?
Kensi: Not like this.
Deeks: You don’t like it?
Kensi: I love it, it’s beautiful… it’s really beautiful.
Deeks: I envisioned it differently in my head. At some point I thought I was gonna ride in on a big white horse and that I would be shirtless, because that’s awesome, and then just a road full of rose petals. Listen, the details are inconsequential. What’s important is I love you and I want to spend the rest of my life with you.
Kensi: I’m not gonna do it. I’m not gonna do it like this. It’s not fair, I’m not doin’ it.
Deeks: Like what?
Kensi: Like this, Deeks. Like this, with this thing and this stupid-
Deeks: Stop, stop, stop!
Kensi: You’re not gonna be in a wheelchair, you understand? And if you were, it wouldn’t matter to me ‘cause I wanna spend the rest of my- stop- I wanna spend the rest of my life with you. It doesn’t matter. I love you.
Kensi: It matters to me. I am not doing this to you. It is not fair.

The scene back in Kensi’s room really unsettled me. Watching Deeks help her into bed felt like a possible preview of what the rest of their life could be like, and I felt for both of them. I know Deeks wouldn’t care, but Kensi sure would. Her “it’s not fair to you” comment in the courtyard summed up how she feels about needing to rely on Deeks for so much. In the room I could just feel the tension coming off of Kensi, and its impact on Deeks as he seemed completely at a loss as to how to help her, how to get her to see the positive side of what’s possible. Both scenes felt messy, without a neat conclusion or tidy reassurance that they’d be OK. I think that’s what made them so effective even as they left me very sad, despite my total faith that they’ll be stronger partners than ever in the end.

At least the episode continued a season featuring a wonderfully supportive team. Even Callen got in on the act this week, noticing how off Deeks was when he got to work, unable to partake in the usual morning banter. That is an alarming sign! And Granger, keeping him from going undercover due to his “personal obligation at the moment.”

And while one of the scenes I’ve most wanted to see has been Sam expressing confidence in Deeks’ ability to do his job (a version of this hit #2 on my Top 3 list), I’m not sure that Sam expressing confidence in Deeks’ ability to pull off crazy exactly hits the mark. Still, I enjoyed this exchange so much, and obviously, Deeks would have brought far more to the part than Callen bothered to. Still, Deeks and Sam throwing each other little grins at the end of the scene as they set Callen up to go in as a possible double murderer made me soooo happy (at least temporarily, you know, in between all the sadness.) It was my favorite three seconds of the whole show.

The intervention with Hetty and Sam was amazing. They were there because they were worried about Deeks, but there was no judging, only caring, coming from both of them. I loved that they wanted him to take time off work. I hope he does that soon, although I can see now why he’s anxious to keep working, since he’s yet to figure out how to get through to Kensi.

I seriously cannot get enough of Sam looking after Deeks. And this week Deeks was the one doling out the little shoulder tap to Sam as he left the boatshed. The team just feels closer than ever right now, which leads me to the most surprising source of my sadness…

No one gets out of here alive

Darn you Owen Granger! I am so mad at the Assistant Director. Mad that just as he finally wormed his way into my heart, he’s got to contract some horrible, possibly fatal illness. Why, show, why? I can’t believe I’m writing any of this, but I would be truly sad to see Miguel Ferrer’s character go. He has brought such a high level of deadpan humor along with a crusty on the outside but gooey on the inside character who really has become part of the team. Couldn’t this wait another couple of seasons? I want him to get some more time with his daughter. Unfortunately, my guess at this point is that Granger may end up sacrificing himself to save the team when the mole storyline comes to its conclusion.

I think what left me feeling genuinely sad at the end of this episode was Granger. Because while the Densi angst was tough this week, I know in the end it will just make it all the more moving and satisfying when they do get their happy ending. With Granger, I worry that the ending might not be at all happy.

Come back later this week for new editions of Deeks’ Surf Log, Kensi’s Journal, and the Drabble and Edit of the Week. Plus this weekend there’s the Classified Preview and the Top 3 Deeks Rambles, and Monday the next installment in our look at how Deeks’ childhood influenced the man we know and love today.

In the meantime, what did you think of “Crazy Train”? Did you handle the sadness better than I did? Or did the episode leave you with different emotions?