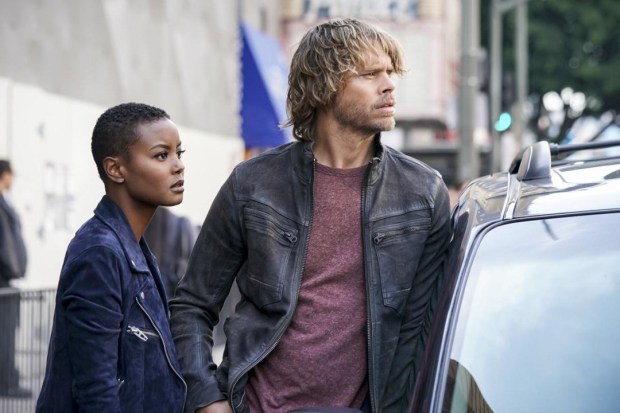 My favorite NCIS: Los Angeles writer Frank Military, AKA The Prince of Darkness, was back this week for only the second time this season, with “The Monster,” co-written by Adam George Key and directed by Dennis Smith. And yes, it had all the darkness – and more – we’ve come to expect from a signature Military episode. So much, in fact, that it couldn’t all fit into a single episode… It looks like the team is in for still more trouble from these creepy serial killing bad guys, and I for one am afraid.

Let’s just dive into the darkness, shall we? The episode, with its two separate cases, felt oddly disjointed, like it was written by two different people. In fact, I’m guessing that’s exactly what happened, that Military handled the Mosley/Callen case and newcomer Key wrote the serial killer case. April Fool’s! Of course Military would have handled the serial killer case. No one else on staff could have dreamed that up!

Having said that, the serial killer case definitely held my attention. The opening scene was gripping, appalling and disturbing. The Lieutenant Commander’s terror, well played by Andy Marques, jumped right through my TV screen and I really felt the horror of his situation.

There was definitely something off about the auto shop owners and employees. They were overly cheery, which I just chalked up to bad acting. I should have known there was more going on than met the eye. While more than a few employers might hire someone with a drug-related arrest in their past, how many of them would so blithely hire someone who’d committed murder? They definitely seemed just a tad too forgiving. Just what you want, an “overly flirty” employee who once dismembered a woman- not exactly what we usually put in the job descriptions at my office. 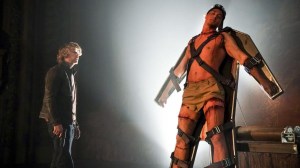 The scene at the theater where Deeks discovers the body was – dare I say? – beautifully shot. The dramatic lighting added immensely to the creepiness, and Eric Christian Olsen provided a perfect reaction of horror and confusion. (It was quite flattering lighting for his close-up too- is it wrong for me to notice that in the midst of the horror?)

This was a really good episode for Deeks fans. We got the delightful Densi conversation to open the episode (see below), plus a couple of fantastic scenes between Deeks and Hidoko. Deeks was such a great mentor to Nell when she came out into the field, and it’s lovely to see him attempt to be the same with Hidoko. Too bad she seemed so able to resist the Deeksness. In fact, that just might be the only part of the scene that didn’t ring true, for how could she continually knock down his efforts at bonding? He’s pretty irresistible after all. I think with a bit more time, he’d get her to spill the beans on her past, including the origin of her name (which I assume belonged to her husband).

Again, ECO  proves that he has great chemistry with literally everyone. Andrea Bordeaux plays the scene totally straight and yet he imbues it with such wonderful charm. His mentoring continued as he cut their interview with Huang short to follow her instead. “The wild jungle cat lays in wait for its prey”- well played, Detective. Then at the theater he looked out for Hidoko, ensuring she was careful when securing Huang’s weapon, and again making sure she was OK after getting a look at the crime scene. He does want to protect everyone around him, doesn’t he?

The highlight of the episode for me was listening to Deeks talk about his struggles to be accepted by the team. His description of taking on Sam in “Hand-to-Hand” reminded us of how much this team has evolved over the years, and of how they really are a family now. I absolutely loved hearing Deeks say it out loud, and it makes me happy for him that he feels that way, and has allowed himself to embrace them as family. It also echoed Hetty’s words to Mosley a few weeks ago. Combined with Deeks’ frequent jokes in this episode about being reassigned to LAPD, it also reminded me of Mosley’s plans to break up this little family.

Deeks: You know when I first met this team, Sam and I were basically in a steel cage match to the death?
Hidoko: And you survived. Impressive.
Deeks: I thought so, you know, ’cause he weighs like 245 pounds and I’m like 180. It’s not the point, the point is I know what it’s like to be the new kid on the block, especially when everybody else has grown up together, and it’s tough.
Hidoko: You all seem to get along fine.
Deeks: Yeah, now we do. Now they’re my family, I love ’em, one of which I love so much I’m gonna marry her. But my point is, that didn’t happen overnight.

I’ve often wondered what it was like for ECO coming onto a set filled with actors who’d already bonded and developed a shorthand with one another, only to have to pretend-fight LL Cool J in his first few scenes. It must have been so intimidating. He was as much a new kid as Deeks.

What with another partner swap, we only got one real Densi scene this episode. It was short but incredibly sweet and romantic. Deeks this episode wasn’t just wearing his heart on his sleeve, allowing us to sense his feelings by the power of his expressive face. He was out and out saying exactly what he was thinking through the whole episode, whether it was his worry about Callen being fired or him being reassigned, his horror over the serial killers’ actions, his declaration of the team as family, or here with Kensi discussing wedding plans. Those communication skills certainly have come a very long way. I love Unfiltered Deeks.

Deeks: Wait a minute. I’m not saying that I don’t care about the length of the tablecloth or the color of the flowers…
Kensi: That’s exactly what you’re saying.
Deeks: I’m just saying, it’s the bride’s day.
Kensi: I don’t want it to be the bride’s day. I want it to be our day, Deeks.
Deeks: Listen, the day that you asked me? That was my day. Alright? That was my week, that was my month, that was my year, that was my lifetime, forget about it. Game over, drop the mic. So the only thing that matters to me in this wedding is that I’m with you.
Kensi: You really don’t care about the tablecloth?
Deeks: Not at all.
Kensi: You know what? Neither do I. But I need help, from you, to organize this wedding. So can you please please can you do that?
Deeks: Absolutely, I can do that.
Kensi: Thank you. I love you.

The highlight here is the super-romantic declaration from Deeks, but I also enjoyed the fact that Kensi also didn’t really care about the wedding details. I think that’s very fitting with her personality, even though we know she has a secret lacy, lady side. Let’s get that simple wedding on the beach already! And by the way, can we assume they’ve picked a date? Perhaps late May?

Ah, but hoping for a happy ending for Densi is where this episode really messed with my head. The fact that Kensi and Sam spent so much time amongst these creepy killers makes me worry that when they return, they’ll be coming for Kensi specifically. And even if they don’t, we know we’re not done with their story. I can’t even imagine having to watch a member of the team be taken by these monsters- it’s chilling to think about.

But it wasn’t as simple as the actual events of the episode. There was something about the contrast between happy wedding plans and awful serial killers that made it feel like the two stories were somehow intertwined. Plus Deeks watching NSA Agent Huang lose her partner in such a tragic way (“Jordan was my partner in Los Angeles”) totally brought back the events of Military’s other episode this year, the amazing “The Silo.” Deeks and Kensi grappling with the dangers of their job, and whether they want to continue facing them while risking all the happiness they might otherwise have, was a theme of “The Silo” and came up in other episodes this year too. (Perhaps they too should consider mutual tracking apps? Heck, I’d put that overwatch spray on the whole team, that’d save them a lot of trouble!)

It all feels like it’s building up to something, a series of events that could prompt one or the other, or both, to make a big career decision. (I refuse to consider that one or the other could be killed- that is too horrific to contemplate. They have earned a happy ending and I will continue to expect just that.) The fact that creepy serial killers are now in the mix with only a few episodes remaining in the season just creates a feeling of dread and impending doom that I now feel hanging over the final episodes, in a way I don’t remember experiencing before.

Even when we knew Sidorov was coming back to threaten nuclear annihilation, I had no idea beforehand that we’d have the darkness that was “Descent.” But Frank Military is like some of my favorite fan fiction writers who aren’t afraid to take Deeks to a dark place. I love the angst they create, but I’m also scared of what exactly they might do- they’re capable of simultaneously great and terrible things. Military imbues his stories with a real sense of danger that’s often lacking on a show of near superheroes who manage to dodge hails of bullets with ease. But hey, at least he’s not writing the finale. However, he does have me rethinking whether it’s a good idea to call AAA the next time I have car trouble!

For me, the serial killers were the real episode and the storyline with Mosley and Callen was a bit superfluous. Since we’d already been clued in about Mosley’s son, it seemed pretty clear from the start here who Spencer Williams was and why Mosley was so intent on apprehending him. I never quite understood why Special Agent Swan allowed her to be present in the first place. Although she showed vulnerability in the end by sharing her story with Callen, I still feel that overall, this character has a single pose, a single expression, and a single way of delivering her lines, and none of these seem likely to change.

On the other hand, how fun was it to see Hetty making herself at home at Mosley’s desk? She’s so skilled at getting under Mosley’s skin in the most pleasant way possible. This conflict between the two “diametrically opposed life views” has me really appreciating all that Hetty (and Linda Hunt) are capable of. At the end of the day, I don’t know whether we’re to think that Mosley still wants to break up the team or not. I don’t find it a particularly interesting storyline, save for giving Hetty a reason to toy with Mosley.

That’s it from me. Come back later this week for new editions of Deeks’ Surf Log, Kensi’s Journal, and the Drabble of the Week. In the meantime, what did you think of “The Monster”? Am I reading way too much into the proverbial tea leaves? Things are going to be just fine, right? Right?