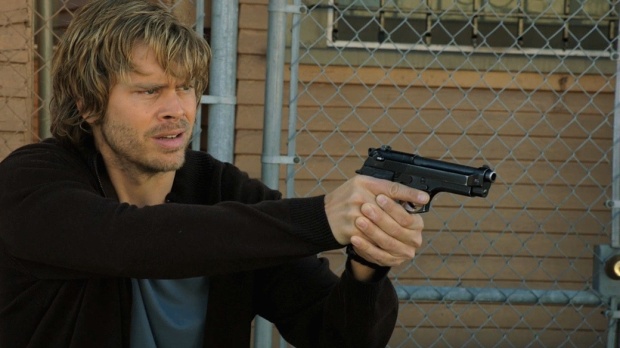 After debating whether Deeks should become an NCIS agent in Debating Deeks, @Densiland weighs in with some key points of her own and a lot of questions as to when and if Marty Deeks will ever turn in his LAPD badge to become a federal agent. Let’s see what she has to say…

While our favorite leading man will likely not take the official leap from LAPD Detective to NCIS Agent anytime soon, now is as good a time as any to consider 1) why he hasn’t yet made the commitment and 2) what could move him in that direction in the future?

Before looking ahead, let’s look back to see how he came to join our motley crew. So what do we know?

He initially worked in the law profession. While Deeks’ traumatic childhood would be an obvious prompt to join a “helping” profession, this particular choice takes considerable time and effort. Is there a deep and serious persona under our jokester’s façade? I think we would all proclaim, “Yes!” and look forward to our own investigation of this entering Season 6. The role as a public defender is a perfect fit for Deeks, again based on what little we know about his formative years. What Deeks was actually like as a lawyer and what his specialty would have been are big enough topics for an entirely separate article here at wikiDeeks!

He made a career change from law to law enforcement. Again, Deeks’ unsettled upbringing would be a key in steering him in this direction. Yet what drove this change? Even Deeks’ own words provide only cursory insight. From “Overwatch”, Kensi inquires why he became a cop. After trying to avoid answering, we get a sincere Deeks, “I wanted to protect people. Ya know. I wanted to do something that really made a difference in peoples’ lives.” (Ahhh! But then, of course, he has to defuse the seriousness with his trademark humor…) “That and I know how girls love guys in uniforms.”

Hetty recruited him. As with anything even remotely related to our ninja leader, we know virtually nothing and are left with a teapot-full of questions!

He’s choosing to remain a cop and not officially join NCIS (at least for now). There will be at least one significant reason behind this purposeful decision. In the beginning, it made sense to stay a cop, as it was what he knew and what he was good at. Now, in seeing his personal and varied “’ships” with other members of the team, realizing he’s physically safer with them and NCIS support, and knowing he can participate in advanced (cool) training, this is an issue begging for insight.

For as much as we know, there’s so much more we don’t know even on this limited topic, such as:

4 Comments on NCISLA Secret Agent Man – From Detective to Agent?