There are classic motorcycles and there are iconic ones. And, the Triumph Bonneville that Marty Deeks roared up on in “The Unwritten Rule,” is an homage to one of the all-time greats in the pantheon of biking history. What made it even sweeter was that this particular bike (the 2013 Steve McQueen edition) actually belongs to Eric Christian Olsen himself. 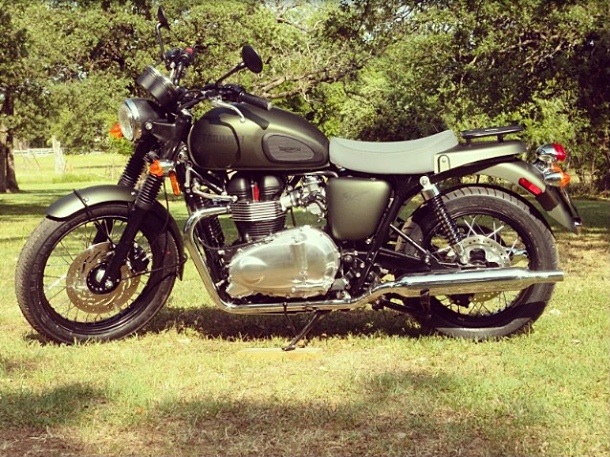 As he informed Twitter users, it’s the “sexiest bike” he’s ever owned – and I can’t disagree! Just looking at this beauty brings back memories of Steve McQueen in The Great Escape, and hoping that this time Hilts “The Cooler King” will make that jump over the barbed-wire fence. And now a new fantasy pops into my head, that of Marty Deeks roaring down the Pacific Coast Highway. I’m spoilt for choice. Given Hetty’s insistence on confiscating the keys and knowing her predilection for classic vehicles, I can only presume she was dying to take this beauty for a ride herself!

@ericcolsen: There are a lot of awesome things happening in this picture. @triumphamerica, the rock store on Mulholland, biker chicks, and sunshine.

When it comes to Triumph motorbikes, I will admit I’m prejudiced. Heck, I’m prejudiced about bikes in general, especially boys on bikes. For that, I blame the aforementioned Mr. McQueen and a series of boyfriends who just happened to own bikes. I’m almost sure the two aren’t related… I’m in good company though – Eric is a long-time aficionado of two-wheeled transport, and of Triumphs in particular. And who could resist the re-invented Triumph Bonneville Steve McQueen edition? Eric’s clearly incredibly proud of his bike and has posted two photos on Instagram. I’m glad to see he opts for a full-face helmet in real-life, because swallowing flies is incredibly overrated!

I can only think of two problems with the bike: first of all, I don’t have one, and secondly, there is no pillion seat, so how on earth is Deeks going to drive Kensi off into the sunset?

1 Comment on Leader of the Pack: Deeks and a Slice of Biking History