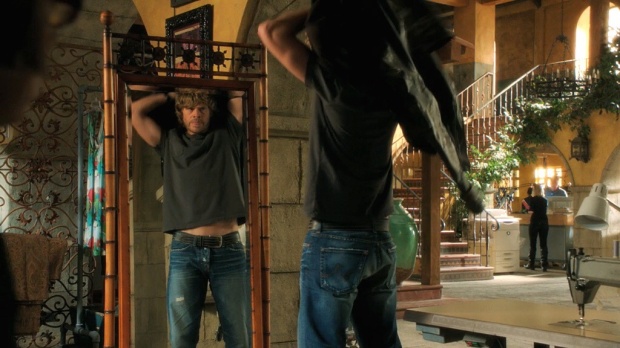 Welcome to a new series called Flashback Deeks: Scenes We Just Can’t Forget. We’re going to look back at some special NCISLA scenes featuring our favorite detective and find out why they resonate so deeply and why they have left an indelible mark in our hearts. In this installment, my thoughts take me back to one pivotal moment over the course of nine years that stands out when it comes to loving Marty Deeks. I never know where my daydreaming is going to take me, but it’s usually a moment in time that allows me to find out more about the man, be able to look deep into his soul and realize why it makes me want to love him just a little bit more. This week’s scene has always been one of my favorites because it has all those things going for it and more.

Most of you who have read my previous features and reviews know how much I love a serious Deeks. After the second season we rarely saw much of this side of the man. Instead, the show opted to display the more fun-loving, dare I say, goofy side of Deeks rather than to explore both the dark and light sides equally. I often wonder if this mysterious or sinister side will ever make another appearance again.

Lately I’ve been hoping this other side of Deeks will return again in the fan favorite undercover guise of Max Gentry. I’ll never forget the first time we meet this intimidating persona in the episode entitled “Plan B”, written by my favorite writing team of Dave Kalstein and Joey Wilson. Deeks insists he must go undercover to find his best friend Ray who has mysteriously disappeared and gone into hiding. It’s Gentry’s first appearance in the series and we learn it’s a façade that Deeks has to reach down deep into his soul to uncover. Max Gentry is every girl’s fantasy… a gorgeous looking bad boy with a chip on his shoulder bigger than the state of Texas. Standing in front of the long mirror in the bullpen, Deeks is uncomfortable with the image staring back in front of him. As he swings the iconic black leather jacket around his shoulders, Hetty sneaks up quietly behind him.

Hetty: So, this is the infamous Max Gentry?

Deeks: This is an alias I did not miss.

Going undercover comes second nature to the LAPD detective, but there is something about this alias that haunts him deeply. All the emotions are real even if the alias is not. Even Hetty knows Max Gentry’s reputation is, in her words, less than stellar, which is in stark contrast to the loyal friend who would do anything and go to any length to protect his childhood buddy. This is the scene where we find out about Deeks’ past relationship with his father and the revelation that he shot his dad in self defense during an ugly family altercation. There’s been much speculation on where Deeks finds the attributes needed to bring this character to life. Does he pull the darkness from having lived with an alcoholic father, or how about the throwaway kids he grew up with on the Los Angeles streets, or perhaps it was the convicts he was forced to defend as a young lawyer? Later with Kensi, he describes him as “just a guy”. He can’t even bring himself to try and explain what Gentry is like. It’s obvious he’s scared every time he unleashes the tiger because he never knows what the outcome will be. Or maybe he just likes playing the role all too much and that scares him even more.

One of the best things I love about this scene is that faraway look in Deeks eyes as he remembers that fateful day with his dad and how it changed his life forever. Eric Christian Olsen bring his “A” game to this unforgettable scene. It’s always given me chills every time I watch it and I fervently wish that we could find out more about what makes this undercover character tick. There has to be a reason why he learned to never shoot back but always shoot first.

I doubt Deeks has been able to purge the nasty Max Gentry from his system. As he gets ready to marry the love of his life, does Kensi really know about this side of Deeks? Was he ever really able to come to terms with this other side of his personality? I can only hope the showrunners see fit to explore this dark side into his past and give us the long awaited “Deeks, M”.  Let’s bring Max Gentry out from hiding one more time to give Deeks a chance for closure.

What do you think about this unforgettable flashback scene? Leave your comments below and let us know.