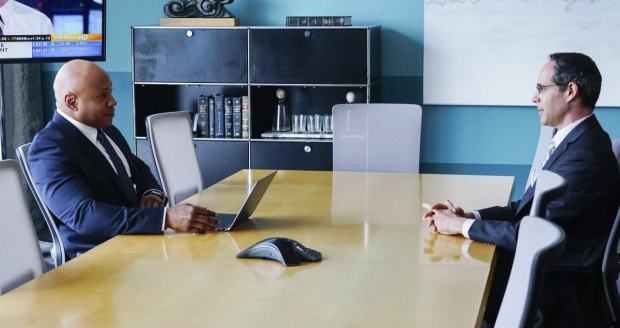 Airing:   October 29th
Filming:  August 30th to September 8th
What CBS is telling us:   Sam goes undercover as a day trader after a prominent investment banker with ties to a Russian oligarch is murdered. Also, one of Callen’s aliases is the victim of credit card theft, and Mosley is concerned it signals something bigger, on NCIS: LOS ANGELES.
What we think is happening:  EAD Mosley is about to experience the wonders and joys every Arkady Kolcheck appearance embodies.  And maybe some of his criminality.  Sam also wears a suit again.  And it is arm day for Deeks.

By the way, the dictionary definition of “Mountebank” is “a person who deceives others, especially in order to trick them out of their money; a charlatan.” (Or you know, Arkady.)

Tembi Locke as Leigha Winters
Was Alice Kent Staley in “The Searchers” season 12 episode of NCIS.

Appeared in episodes of Me and the Boys, Night Stand, Martin, In the House (LL Cool J’s 1990’s sitcom), Hitz, The Wayans Bros., The Jamie Foxx Show, Friends, The Hughleys, One on one, Touched by an Angel, The Division, The Bernie Mac Show, Like Family, Eve, CSI: NY, Quintuplets, Unscripted, The ½ Hour News Hour, House of Payne, The Mentalist, Bones, Castle, Crazy Ex-Girlfriend, The Magicians, Animal Kingdom and Doubt.

Costas Mandylor as Abram Sokolov
Mandylor is a familiar credit on NCIS: Los Angeles.  Costas’s brother Louis was the imprisoned serial killer Lucas Maragos in the “Little Angels” episode in season two.  Appeared in the “Whiskey Tango Foxtrot” and “Past, Present, and Future” season 11 opening episodes of NCIS.

Appeared in episodes of Tales from the Crypt, FX: The Series, Resurrection Blvd., Nash Bridges, Sex & The City, Flatland, Sacred Ground, Fastlane, Major Crimes and Once Upon a Time.

Was also in a number of feature films and TV movies.

@realcostasmandylor thinking he can be taller than me. Awesome guy, amazing actor. #ncisla @ncisla

Uriah Shelton as Finn
Played Jack McGuire in Trust Me, Jeff Cargill in The Glades, Josh in Blue and Josh Matthews in Girl Meets World.  Was in episodes of Ghost Whisperer, MADtv, Suite Life on Deck, Monk, Franklin & Bash, Last Man Standing, Justified, The Rev, Instant Mom and 13 Reasons Why.

Svetlana Efremova as Vladlena Sokolov
Had guest roles in episodes of Gideon’s Crossing, The West Wing, The Guardian, Thieves, Strong Medicine, Without a Trace, The Practice, Cold Case, Curb Your Enthusiasm, Joan of Arcadia, ER, Judging Amy, The Young and the Restless, Monk, Dirt, The Closer, The Whole Truth, Motive, Body of Proof, Work It, Shameless, The OA, MacGyver, The Blacklist: Redemption, SEAL Team and The Brave.

Played Zinaida Preobrazhenskaya in The Americans for a few seasons.

Jon Lindstrom as Phillip Nelson
Lindstrom is familiar to soap fans.  For years, he’s played Dr. Kevin Collins and for a while his evil twin Ryan Chamberlain on both General Hospital and its spin-off Port Charles, He was also Mark McCormick on Santa Barbara and Craig Montgomery on As the World Turns.

Your own trailer AND they bring you breakfast. I love this biz. #NCISLA

Played Carly Sinclair in Secrets and Lies and Erica in The Haves and Have Nots.  Had guest roles in Sugar, Rizzoli & Isles, Rosewood and Dear White People.

Amy Stewart as Jen
Played Arlene Ross in the “Crash” episode of JAG‘s season nine and was Katie Happ in the “Lost at Sea” episode of NCIS in season ten.  Was Sara Dolan in Glory Days, Nina Lombardi in Presidio Med, Brandy Rossi in The Lake and Peter’s Wife in Dig.

Dan Southworth as Alika Hatch
Southworth has worked as both an actor and a stunt performer.

He was Eric Myers/Quantum Ranger in a number of Power Ranger series, videos and video games, was Mark Leonard in Divergence and Kenshi in Mortal Kombat: Legacy.

Rich Ting as Keith
Ting was Lee Cheol-Min in season two of Iris and guest starred in episodes of Boston Legal, Beyond the Break, The Messengers, Rush Hour and Supergirl.

He appeared in episodes of Strong Medicine, On the Cover, Monk, Heroes, Hurl!, Hannah Montana, The Mentalist, Chuck, MADtv, Without a Trace, Castle, The Office, The Suite Life on Deck, The Neighbors, The Client List, How I Met Your Mother, Kickin’ It, Ground Floor, Skin Wars, Shameless, Conan, The McCarthys, A to Z, Grandfathered, Life in Pieces, Jane the Virgin, Cooper Barrett’s Guide to Surviving Life, Murder in the First, The Young and the Restless, Baskets and Insecure.

Hard at work behind the scenes:

EPot is working out the prep details for E904. Another #BTS view!#StayTuned pic.twitter.com/3bcl1YLIpS

Hard at work shooting a scene:

Renee Felice Smith giving away some secrets of the trade:

Barrett Foa getting his Eric look back:

Bye Bye, Burner Beard. Unlike Barrett Foa, Eric Beale did NOT just spend a week in the hot Nevada desert dancing around like a maniac with 70,000 other hippies. #backtowork

When filming on location and these are first words you see when you walk on set, you know it's gonna be a great day. #creativity #actorslife #actress #behindthescenes #Hollywood #inspire #NCISLA

I am not always sure of my exact next step, but I sure as hell know it begins with a brave, vulnerable, magical, sexy open-heart. #leap #creativity #actress #actorslife #Hollywood #behindthescenes #storyteller #writer #change

On location filming this week's episode of #NCIS:LA. It was a joy working with this bunch. ❤️Tune in Sunday and enjoy! #behindthescenes #actress #actorslife #Hollywood #storyteller #arts #onlocation #setlife

Possible Sports Related Delays:  CBS has one late regional game – Houston Texans at Seattle Seahawks – but it is going to a number of big cities in the Eastern and Central Time Zones (Houston, of course, but also New York, Chicago, Philadelphia, Atlanta, Charlotte, Tampa Bay, San Antonio, New Orleans, Baton Rouge, Austin to name a few).   Most of the country will be starting on time.   I will update the start time if there is a delay in the comments section Sunday night (especially since I live in one of the delay cities).  Other places to find the start time include the show’s official Twitter account (@NCISLA) and CBS’s official twitter account (@CBSTweet).

Any late info from the cast or crew will also be in the comment section.