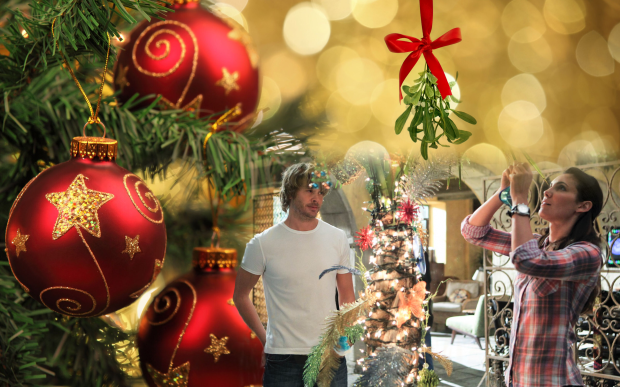 The eggnog was bland at best, the music cheesy and far too loud, awkward company of the office holiday party setting the third and final strike in Kensi’s deep desire to flee the ugly building and small talk from dozens of people she couldn’t even give more than a name to, instead setting up camp with rocky road and her couch, maybe whatever silly Christmas movie was currently playing, the Hallmark channel a recent addiction she wasn’t completely proud of; she blamed Kat, Mindy, Mandy, and both the Tiffanies, and the holidays for creating a hiatus in her usual TV selections.

“This is a wild ride,” Nell stated dryly, running the tip of her finger through a lump of fake snow on the table beside her, the other clutched around a glass of the pathetic eggnog, weaker than the nonalcoholic crap she’d buy in a supermarket when feeling particularly spontaneous. “Thanks for making me come.”

“I knew you couldn’t miss it,” Kensi managed a smirk, images of yoga pants and oversized tee shirts heavy in her imagination, boredom completely draining, more so than a typical day in this office. “Most wonderful time of the year.”

“Can I at least see him?” Nell questioned pointedly, playful tone matching her smirk and sparkle in her eyes, well meaning, nothing more than curiosity yet a slight bead of annoyance dug into Kensi’s gut, most likely originating from the memories brought forth, not the little question itself.

It had been a mistake, banter and shared looks of exasperation in utterly unnecessary meetings and a few lunches spent together under florescent lighting in the break room that allowed her to accept Nick’s, her sometimes sweet and sometimes douchy, coworker’s invitation to a dinner, one that she’d casually mentioned in a few pre-dinner texts to the petite redhead beside her now, one she wished she’d discussed further in hindsight, a fake emergency from her friend would have easily pulled her away from that hellish experience.

And now there was a faint devilish gleam in Nell’s eyes as she bumped her shoulder in the taller woman’s side, desperately searching for any form of entertainment in this cliché little party with yet another rendition of Let It Snow oozing from the speakers. “Kens, I need a face.”

Swiveling slightly, Kensi flickered her eyes shut, the few drops of eggnog she’d consumed earlier before dropping the clear, little party glass in the trash where it belonged seeming to go straight to her brain, along with the ridiculous level of noise in this room; God, did everyone need to speak at once?

Truthfully she’d spotted him moments ago, during a scan of all the exits for escape purposes, leaning beside a table of cupcakes with decorative frosted Santa beards and little mistletoes, and truthfully she’d immediately pulled her eyes away, though a sugar rush did sound excellent right now, instead landing the mismatched orbs on a man whose desk was located on the floor beneath hers, his blonde mop of hair familiar, one she’d noticed bobbing along the top of the cubicles from her office before, though the fluffy red Santa hat that covered most of those locks now was an addition she was unfamiliar with and utterly amused by. And really, that combination paired with his dark jeans and black button down, sleeves rolled up to the elbows, wasn’t one she found completely disagreeable.

“There,” she muttered, wiping the tips of her fingers off on the green and red holiday napkin clutched tightly in her palm, left over from the brownie she’d enjoyed twenty minutes prior. “Blonde, talking to the one in the green tie.”

“He-” Pausing for a half second, Kensi shook her head, shoving at the tendrils of guilt she felt over her brand new fake ex, one not exactly picked out of a hat, though anyone was better than the truthful option. “We just didn’t work out.”

“I’ve never heard that one before,” Nell quipped, tone dry as she affectionately nudged her again, downing the last creamy drops of her eggnog with a grimace, and likely nausea, judging from the flutter of her eyelids.

“Trash,” she snapped her fingers, stealing the napkin from Kensi’s hand and stepping away before cocking her head. “And a punch run, otherwise that slime is going to set up a permanent household in my throat, want anything?”

Passing a soft, “I’m good,” before lifting her gaze to the ceiling, flipping back a lock of soft, barely styled hair over her shoulder, Kensi pursed her lips, cutting off the sigh that wanted to fall from them before it began, a tiny dig of loneliness eating into her gut, because truthfully it wasn’t a good date, relationship she was looking for, it wasn’t a good smile and confident attitude that had her saying yes to dinner with a coworker a couple weeks prior, it was the reminder of how her least favorite time of the year had once been the best, how the ache sent in every year with the chill of December, reminders of how tragedy kept her from her father, pride from her mother, and fate from anything else.

Shaking her head, the sharp need to remove her heels and this silly dress and retire to her couch with something stronger than that damn eggnog renewed, Kensi shifted, running a palm over her waistline, stomach ridiculously empty, scanning her eyes over the crowd, searching for a short redhead she could hopefully persuade to abandon this party.

She saw his blonde mop first, partially obscured by that festive hat, nodding rather enthusiastically along with Nell’s words and smiles.

“Dammit, Nell,” she hissed, mind suddenly blank as she searched for the exit she went through every day, near panic attack interrupted by the ping of her phone.

He’s actually pretty sweet, made the eggnog apparently so your cooking skills are on the same level

Just wait for it

Confusion and worry furrowing her brow, she nearly jumped straight out of those ridiculous and painful heels when a masculine voice sounded behind her.

She shouldn’t have been surprised to twist and see deep blue eyes peering at her from beneath a furry white rim and blonde curls, shouldn’t have been surprised to see his unfamiliar pink lips twisted into a devious smile, but God, the shock froze her tongue in her mouth as she found herself accepting the little plastic cup of generic fruit punch, slightly chilly against her fingers.

“Marty,” he introduced himself with a nod and a tiny bow, mouth contorting in a valiant effort to hold back laughter. “And you’re Kensi.”

“Am apparently spreading the rumor that yours truly is a bad date around the office,” a chuckle escaped with that line, his amusement anything but endearing when paired with her complete mortification.

“But that’s okay,” he paused, tipping his own punch cup to her in a little salute. “I’m good at overcoming the odds.”

Squeezing her eyes, Kensi pulled in a rushed breath, willing away the bright red blush from her features. “I’m sorry-”

“No, don’t be, the second date will be better, I promise.”

A single nonsensical, incoherent mumble slipping free from her lips, she mentally dislodged the instincts ordering her to defensively snap at the man and leave.

“Marty, I’m sorry, it was just- jokes with a friend, unprofessional, I’m sorry.”

“I am honored to be your chosen fake ex, Ms. Blye,” he drawled, tipping his head again, what was obviously fake charm dripping from his tongue finally drawing a quirk of a smile from her lips, flustered as it was. “And to be the worst date you never had, and the best second date you’ll ever have.”

“Just keeping up appearances,” he interrupted, stumbling over an awkward wink.

Biting back a defensive retort that would likely land her in more trouble than this ocean she was already stranded in, God, she could just imagine the HR report, Kensi managed a polite smile, taking a quick sip of the punch he’d delivered. “I was just heading out, Marty, but I’d appreciate if this didn’t become a rumor.”

“Our secret, I promise,” his smile paired with the guarantee surprisingly and utterly genuine, lined with a certain sweetness that found her passing back one of her own.

But she still despised the little shiver that raced down her spine when he granted another one of those smiles, and the soft words of “see you Monday.”

She didn’t hate it nearly as much when she did see him just days later, sharing knowing, slightly less embarrassing smiles.

(She didn’t hate it in the least when she finally did let him take her on that second date.)