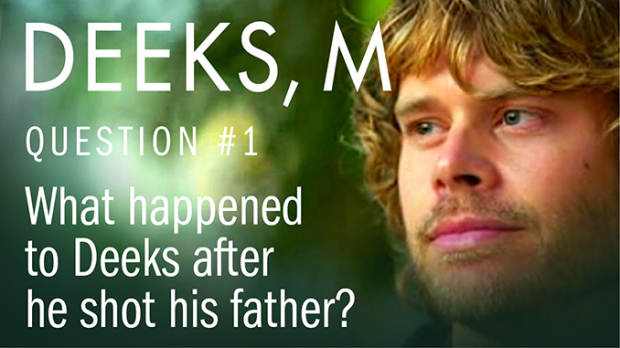 In our quest to provide the type of questions we would like to see answered for “Deeks, M”, we present to you Question #1:  What happened to Deeks after he shot his father?

In Deeks lore, we know that Deeks shot his father in self-defense after he pointed a gun at Deeks and his mother. We can assume that Deeks was arrested and had his day in juvenile court. But imagine what it was like for a young boy to be incarcerated for such an emotionally charged event. This trauma had to have an immediate as well as a long term effect on someone so young. It’s possible that another person could have used this traumatic event as a jumping stone to a life of violence and brutality but somehow Deeks overcame this possible future and instead changed his life around. This was a huge turning point in his life because Deeks eventually decided to take the road less traveled and dedicate his life to fighting evil and injustice. If he had any regrets in shooting his father, going straight allowed him to ease his conscience and seek forgiveness for an act that didn’t come naturally to him.

Was Deeks’ legal team able to prove he shot his father in self-defense? If not, was he convicted and did he serve any time in the juvenile system? What was the real reason he finally decided to fight fire with fire? This was probably not the first time he had to step up to protect himself and his mother and there was no love lost between father and son. But did the young Deeks decide finally he had had enough and decide to shoot his father out of pure hatred? Who knows? We would like to think that Deeks’ base instincts were probably to protect someone or something. Whether it was his mother, human traffic victims or abused prostitutes, Deeks was born with the gene to protect the underdog, particularly women. But the main question is did he spend any time in juvie and for how long? Up until the time Mama Deeks came back into his life, Deeks never talked about her. Was he removed from his parents’ custody and put into a foster home? If so, I would hope he found a mentor to get him through the next period of his life including secondary education and college.

Only Hetty could get sealed juvenile court documents when she was researching Deeks’ history prior to offering him his liaison job. But does having sealed documents imply that 11-year-old Deeks was arrested for shooting his dad or did he become a ward of the court? This leads me to a conspiracy theory that I have promoted since Deeks’ arrival to NCIS which is how long has Hetty been following Deeks? I’d like to think he was one of her lost boys much like Callen. I think a case like this would have drawn her attention particularly if he was removed from his parents’ custody. Of course she would have remained a secret benefactor but with help from the system, she could have been directing the course of his life from behind the scenes. When the time was right she brought him into the fold and the rest is history. Crazy theory, you say? Maybe not.

Let us know what you think happened after Deeks shot his dad. Leave your comments below.

30 Comments on Question #1: What happened to Deeks after he shot his father?