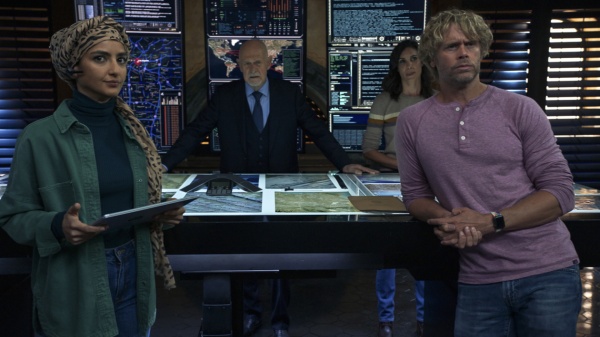 Hey everyone! I hope that you all are healthy and hopefully getting back to normal now that the pandemic seems to be fading out… finally. I’ve been out of the loop for the last few months and have not been keeping up with the show like I usually do. So, it was with some trepidation that I agreed to write the review for “Where Loyalties Lie” but, I am glad to say that I did actually enjoy this episode.

Let’s dispense with the particulars of the case right away so we can get to the more tangible parts of the episode. The case was pretty straightforward; we had the opening with some Marines, led by Master Sgt. Maxwell, moving through a close quarters simulator with some type of high-tech goggles that could actually “see” through walls while identifying if the combatants were armed. After two of them are taken out, we see that while the goggles give a great advantage to whomever is wearing them, they are not exactly as accurate as they are designed to be.

Enter Dr. Laura Nash, who tells the Master Sergeant (referred to as “Top” by us Leathernecks) and his Marines that they need to run through it again to work out some of the kinks in the system. Then we see the sun set and the good doctor is working alone when she hears something that takes her away from her workstation. Upon finding a dead rat in a trap, she thinks the danger is past when she is suddenly shot down by a gunman in the shadows.

Then we get the details of the case provided by Fatima back in Operations: the doctor is dead, and the high-tech goggles are missing, which is potentially a game changer if they fall into the wrong hands. The team begins to investigate all the parties involved, from the Marines to the doctor’s associates and her right-hand-man who becomes the standout suspect fairly quickly. When he can’t be located, their attention falls on Jun Chen, a visiting doctor from Shanghai who turns out to be a spy for the People’s Republic of China. Under Sam and Callen’s interrogation, she reveals who she bought the goggles from but will not reveal the location of the goggles.

By the end of the episode, the team finds itself with only half of the case solved. The doctor’s killer has been discovered and had been groomed by the leader of the White Kings, a white supremacist group who had also acquired a supply of a new and dangerous explosive that was impossible to detect and very volatile. He stole the tech to sell to the Chinese spy for a couple of million dollars and was planning on using the money to escape after planting the explosives at a community center and targeting a scholarship awards program for immigrant families. Even after thwarting the attack and taking out both of the perpetrators, the team had still not acquired the missing goggles.

There were no real surprises revealed as the find-the-clues-solve-the-case formula played out. The only real suspect was Doctor Nash’s assistant and then his history was uncovered by Fatima fairly easily. Then all the team had to do was establish the target and that was fleshed out by Kensi’s unfathomable obsession with denim. Sam and Callen took out the two bad guys easily while Kensi and Deeks were ensuring the safe evacuation of the community center. Only a few shots fired, and the end result was two dead guys and some work for the bomb squad to clean up.

I feel like we’re still waiting for a true protagonist for our team to fight against. I mean, the two terrorists in this show went through a lot of trouble to stage their attack, but then they had no back up plan if they ran into problems. Where are the bad guys that are two steps ahead of the team? Where was the dead man’s switch that activated as soon as the perpetrator was shot? Why not have it on a timer or motion activated if anyone tried to leave the building? It was a simple plan, but it felt pretty generic as well. I think we need to see the team put up against bad guys that really give them a run for their money and with some serious collateral damage. I’m not asking for a high body count, but the stakes need to be higher if the threat is going to feel “real”.

What bothered me about the resolution was fairly obvious: there really wasn’t one. The high-tech goggles were still out there and from Kilbride’s reaction that even though a shooter with a pair of these would bad, an army wearing them would be catastrophic. Yet, the team closes it up, relaxes and heads home. Uhhh… no… the game isn’t over, and the full court press should still be on. Did they leave this for the second shift? Did they call Washington? Is the phone ringing in the Bat Cave? I’m sorry, but when the threat is still active, you don’t just go home without a plan, and I feel that part was left out.

No real big chases or explosions. So, for me, the case gets a basic “meh” as far as excitement goes. It had enough to keep my attention but nothing to really write home about. But what did keep my attention and why I still like this show was the interactions between the characters. From the opening with Kensi and Deeks’ bantering about converting the two-car garage into a man-cave, to Kilbride easing Fatima’s tension by asking about the game from the night before, to Callen keeping Sam in the dark about how the secret agent is getting ghosted. 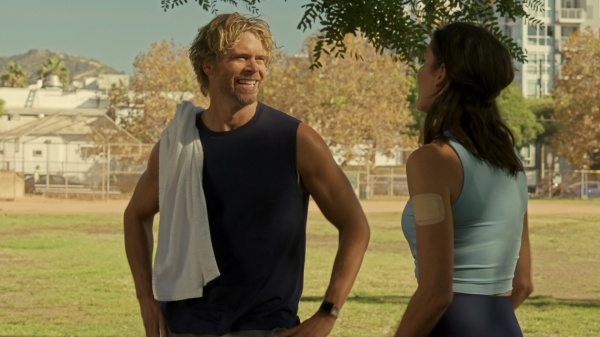 I love watching Dani and Eric ad lib through their scenes. Her smack to his behind when she ran past to when she almost spit out her drink when he mentioned “artisan cows raised on artisan grass” and then they shift to talking about consulting a magic eight ball. Then we got a Wild Ones reference complete with Deeks in a leather jacket and a Marlon Brando impersonation. That actually cracked me up!

These two are so comfortable acting together that they never seem to be acting together. I think that they have been friends and relatives for so long, that even though their characters are married in the show, they sometimes come across as true brother and sister. This isn’t a bad thing, and it really adds to their dynamic, but sometimes I think it takes away from the intimacy that we expect from a happily married couple. It’s great for their interactions and banter, but any outside observer who only sees what we see might mistake them for siblings instead of husband and wife. 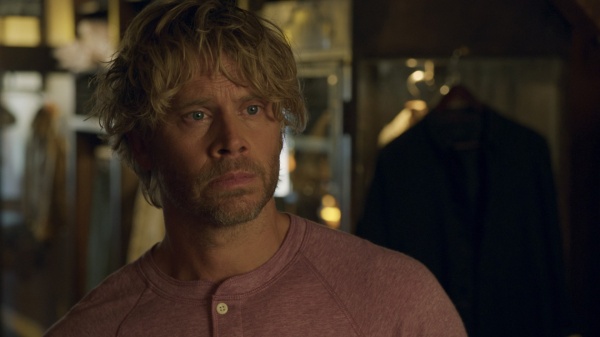 But the part of the episode that stood out the most to me was Deeks and his concern over having to tell Callen that they were selling the Squid and Dagger and that Callen was going to have to find a new place to live. While this seemed like an easy thing to do, you could really see how Deeks was struggling to do this to his friend and teammate. He tried to hide it with humor with Kensi, then he became nervous and frantic while trying to talk Sam into doing it for him.

Eventually, at the very end, Deeks slunk into the bullpen and finally broke it to his friend, and we got one of the sweetest moments that I can remember between these two characters. Here was Deeks, worried sick over having to tell his trusted teammate that he was about to be put out of his place and the team leader reveals that he had moved in in order to help out the younger couple financially. It was one of those “Gift of the Magi” moments… it’s a classic, look it up… that shows that even when the writers don’t give a very intriguing case, they can still fill these characters with heart and soul.

We also got a tender moment when Deeks and Kensi were interviewing the high-end store owner, Ruby and she revealed the tragic story about her connection with the local charity that was the target of the attack. Her sad tale of her sister’s addiction to meth and subsequent relapse that claimed her life really brought out the feels for me. I’ve worked with people struggling with the same addiction and it is a terrible situation that too many of us are familiar with. I thought that both Dani and Eric’s facial expressions perfectly conveyed their compassion for the young woman and the loss she had experienced.

But… and this is a big but… I cannot believe that we had no x-ray glasses references, not one! I have a stack of old comic books and on the back cover of almost every one is an advertisement where you can send off for a pair of x-ray specs that would allow you to see through… well… anything! And not one time did we get Deeks saying anything about using them to see what Kensi is wearing underneath her clothes. No comparisons to Superman or questions about being able to see through lead. I thought that was a terrible waste of material and really took something away that I feel Eric would have really had some fun with. There would have been plenty of opportunities for Lois and Clarke references or finding the remote that they lost a month ago or seeing what Sam ate for lunch. Oh well, I guess that’s why I don’t get to write the show.

Once the case was resolved, we got the real reason for the episode: another layer of the onion that further reveals that Callen is being ghosted by some mysterious figure (or figures). They have even gone as far as to impersonate him to his doctor and apparently his bank as well. They must be testing out their deepfake work as well as Callen’s level of security which seems weak if they know his doctor and bank. Since we are heading toward the down slope of the end of the season in May, this might just be the tease that gets us to the finale. I guess we will have to wait and see. What I got from this show was that someone has it out for Callen, it will involve Anna, and it could possibly have huge implications for the Office of Special Projects. Is Katya about to pop back up and cause even more death and mayhem?

So, what do you think about this episode? Was it riveting or did it leave you wanting? What did you like about it and what did you dislike? How do you feel about the White Supremacists in the military/government story line? Do you have any theories about who is out to get Callen? How will Deeks and Kensi resolve the Man Cave Conundrum? We didn’t get much on the “kids” issue, so where do you think that is going? And, where in the world is Hetty?

Drop us a comment and don’t forget to come back later this week for Deeks’ Surf Log and Kensi’s journal. And as always, SEMPER FI!

I'm just me. I served proudly in the United States Marine Corps for four years after graduating from high school. For the past twenty-six years, I've been married to the most wonderful woman in the world. Our daughter is still at home but our son just moved to Russia to study at Moscow State University. We also live with four cats and one dog in south Georgia where I spend my time loving my family, writing stories, working, and shooting my bow.