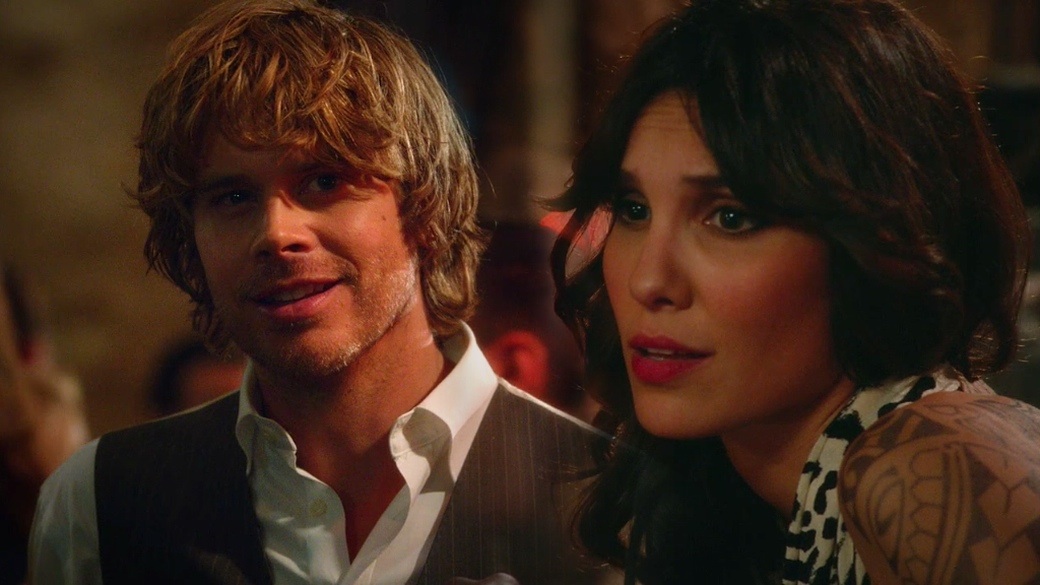 Known more for its status as the launch of the (brilliant) Janvier story arc, “Crimeleon” exposes some essential clues about our detective that are frequently overlooked. Do you recall it was actually Deeks who assigned the moniker of “Chameleon” in the first place? Not surprising from the man enamored with nicknames!

As usual, the team starts the day in the bullpen. However, this morning Deeks’ partner is concocting a healthy smoothie. (Wait. What? Wasn’t Deeks’ initially characterized as the more health-conscious of their duo? Of course, that’s not a stretch compared to his saccharine-surplused colleague.) It soon seems the “juice” was an effort of cunning mischief, which the malleable detective takes in stride. If Kensi is voluntarily taking the time and effort to craft a beverage for him (and initiate unquestionably flirtatious banter), then who is he to deny her selfless offering?

With the overflowing obvious innuendos, it’s a wonder the blender didn’t pop its top! While Deeks accepts and (partially) consumes the gift, he doesn’t feign its inedible condition. Even at the risk of hurting Kensi’s feelings, he doesn’t withhold his genuine reaction. [And if you’d like to see even more of “The Woody”, check out an alternate and extended version originally developed for “Betrayal (S3E9). The Season 3 DVD set presents it as a deleted scene.]

In the end, as Deeks attempts to placate his partner, it is he who inevitably regrets the endeavor. In overcoming a near-choking and possible future gastrointestinal incident, it was worth it. Because at least it got her to smile. A small (personally harmful and humiliating) price to pay for such a valuable reward.

Anyone ever notice that the very mention of a club raises the stakes among the team, particularly their cunning cop? However, which Deeks do we see and hear prior to his departure to Edison? He confesses he lied about Kensi. If this was simply a girl he was dating, why would that matter? Is he pro-actively avoiding any potential jealousy from Bartender Erin? (Oh buddy. Your days of dealing with jealousy haven’t yet begun.) Perhaps it’s simply for the sake of security, on which Sam has presumably (post-“Personal”) and thoroughly schooled him.


Then we are introduced to Erin – and question Deeks’ preferences in women! (Yes, like Kensi, he certainly attracts the crazies!) Would he seriously date someone like Erin or does she serve as merely an entertaining adventure? Deeks applies his patented charm to attain the details needed to advance their investigation, which brings his regular ploy into question: Does he flirt to only obtain information or is it sincere? When does he use it for professional versus personal gain? How can you discern the difference? While Erin and Kensi might share a love of knives, that’s where the similarities end! However, our faith is restored in the detective as he indicates his own awareness of Erin’s fear-inducing and nearly unhinged personality:

Erin: I hope you get paralyzed in a car accident.
Deeks: Ok. You, you look fantastic. You’re still obviously crazy. [She begins to hurl the lemons at him.] I’m gonna leave that and just go. But I’ll call you. [Whispering] Probably not.

Deeks is expertly skilled in playing his mark, but how does he communicate his sincerity? Kensi has regularly seen both sides to him, but how can she be certain of his true intentions? The foreshadowing for the end of Season 4 is now clear in the detective pushing his partner to the point of frustration and her demands for him to say something he actually means.

In one of, if not the last time Kensi was used as “bait”, the result was more productive for Deeks than the actual case. Even Sam and Callen can’t withhold commenting on Special Agent Blye’s striking appearance. A flowing mane, plunging neckline, retreating hemline, a chain of intricate tattoos, and always those legs that go on for days would attract the attention of anyone male or female. However, it’s what hides below the surface that genuinely intrigues Deeks.

Our dashingly-dressed Deeks pointedly and happily observes the current offering of The Kensi Show as she expertly presents her skills in covertness, seduction, humor, inventiveness – and interest in another man! This prompts Deeks’ ego and manly-need to demand Kensi’s attention and positive appraisal of him. He boldly outlines a possible personal evening interaction with his partner (to obviously provoke a response) and brazenly does so with the comms wide open!

Then Deeks makes his final complex ploy in smoothly responding to Kensi with, “Except for the fact you’re not my type.” Keen viewers may recall a near-mirror utterance of this same statement in “Special Delivery” (S2E4). During their very first undercover mission playing a couple, Deeks effortlessly “sells” them by holding Kensi’s hand and offering pet names to her in a jewelry store. Later in the bullpen he justifies his effort, but Kensi only scoffs:

Kensi:  Yeh whatever. Like anybody would believe that we’re a couple.
Deeks:  Right. You are so not my type.

In that instance Kensi doesn’t confirm or deny his assessment, but rather seeks insight and clarification. In those very early days they were simply trying to understand and become familiar with the other. Nearly a year and a half later, smartly dressed, and within the safety of a cover, the tension between these two has reached a whole new level. Kensi’s protective wall is weakening and Deeks’ confidence has only gained strength. Unlike last time when Kensi lacked awareness, this time her reactionary reply is purely authentic and emphatic. Plus, Kensi’s ego gets the best of her too: “I am too your type.”

Does it look hot in that club? Yeah, because those two just set it on fire! With that singular line, Deeks must have felt like he’d won the lottery. As he basks in the moment and the guys pile on, Kensi is physically rooted by the mission, but verbally running in reverse. (Do any of us doubt Eric or Nell covertly gifted Deeks with that audio file of her confession?)

Deeks is internally rejoicing that he was finally able to obtain a genuine response from Kensi, and even given their undercover situation, she is unable to hide behind it. Yet, he’s likely far more celebratory of the fact Kensi seems to have been able to voice her personal sentiment at all; her “wall” is clearly cracking. This is the start of a very limited period of time in which Kensi truthfully and directly communicates her feelings to Deeks. (I’m sure he misses those days as much as we do!)

As the episode winds down, Deeks runs to Kensi’s side inquiring if she is “okay” after her physical altercation – an expected occurrence. Finally, the still fearless Deeks confronts Granger about being the person who actually brought Chameleon to them in the first place. (How many of us had overlooked that?)