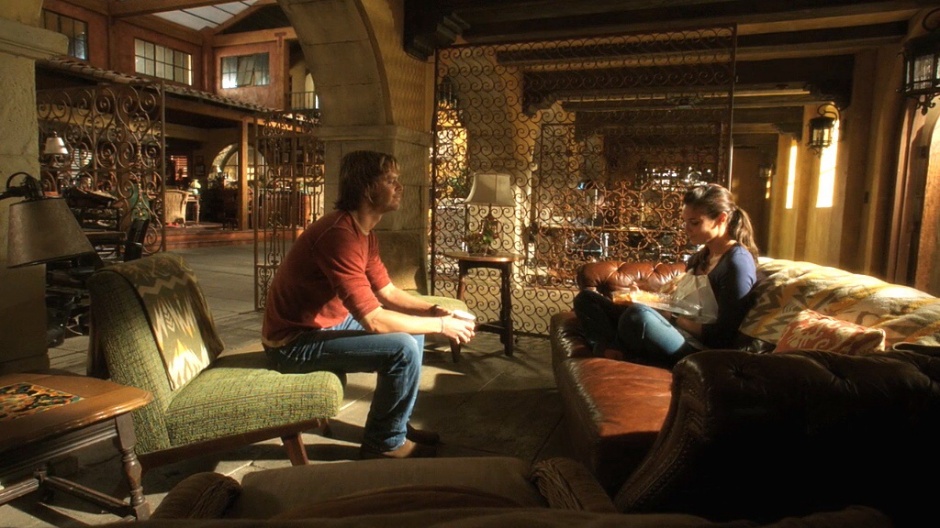 They are both terrible communicators, but somehow Deeks and Kensi make their thing work. They may have struggled over the years to say what they really mean, but that’s not to say they haven’t had a few breakthrough moments of topnotch communication. Some of them involved words, some merely very demonstrative actions.

This is a Top 3 of Densi scenes where the duo managed to communicate something important. I found myself considering both the emotion and entertainment value of the way the communication was carried out, as well as the impact of that communication on their relationship.

I ended up with two scenes where Deeks and Kensi used actual words to communicate, and one where the actions spoke loudly enough to land a spot. In reverse order of importance, my Top 3 is…

For me, the driving theme of Kensi and Deeks’ relationship has always been trust. They began their partnership with none, and over time they slowly came to trust one another. That trust grew to the point where Kensi had Deeks’ back during a murder investigation, and just as impressive, trusted him with her heart. One of their key early breakthroughs about trust comes at the end of “Bounty,” written by Dave Kalstein. The episode opens with Deeks refusing to let Kensi handle his gun. “It’s a guy thing,” he blurts out. But after some prompting from Hetty via a made-up story about Sam and Callen and the Armenian mob, Deeks realizes that something needs to give. He offers up his gun to Kensi in an act of clear communication, telling her without words that he trusts her with something important to him. She doesn’t take the gun, but the look on her face shows us, and Deeks, how well she understands his gesture. A couple episodes later she trusts him with her life in “Deliverance” and their thing evolves from there, but for me this scene in “Bounty” is a key first step.

Deeks kept his culpability in the death of Francis Boyle from everyone, including Kensi, right through the Internal Affairs investigation. This was a huge secret with the potential to tear their relationship apart, and it might have been a tempting direction for the showrunners to take with Densi. Instead, post-“Internal Affairs,” Deeks quickly comes clean to her (or “finally comes clean” depending on your point of view). Either way, Kensi surprises him by revealing that she already knew, and that she had waited for him to be ready to talk to her about it. Written by Joseph C. Wilson, it’s a beautiful little scene, with Deeks mentally prepared for Kensi’s wrath or sadness. Instead he gets her calm and loving forgiveness, arguably more than he deserves. She sets a “no more secrets” rule going forward and they kiss and move on to what I’d imagine was a very merry Christmas. It’s moving and sweet and a very adult conversation between two mature people. It’s a huge contrast to their preferred non-verbal communication in earlier seasons (see #3 above).

Another key element of Kensi and Deeks’ relationship has been its “opposites attract” nature. The specific quality in question in “Empty Quiver,” written by Dave Kalstein, is that of humor, or the lack thereof. Kensi is “the most serious person” Deeks has ever met. And Deeks “never takes anything seriously,” according to Kensi. At the episode’s start, they both plead with Hetty to break up their partnership. By episode’s end, they both realize they have to give up just a little of themselves, and work at meeting the other partway, in order to make their partnership work. I love the way Deeks fondly looks on as Kensi tries to proclaim her ability to crack Nell up, but the key moment of communication here is when Deeks (as usual the first one to extend himself) tells Kensi, “In the future I will, uh, I will try to take things more seriously.” Kensi meets him halfway, saying, “Well I… I will try and lighten up.” It’s the first real commitment they’ve made to one another and a key moment in their relationship.

In the next few weeks we’re moving into some darker territory, starting with The Top 3 Heartbreaking Moments. Ugh- I’m getting sad just thinking about it! OK, before we all get sad together, tell us your Top 3 Densi Communications in the Comments below!

Or go back to last week’s Top 3, The Top 3 Sexiest Scenes.

14 Comments on The Top 3 Densi Communications