The latest NCIS: Los Angeles episode “The Heist,” written by Jordana Lewis Jaffe and directed by Yangzom Brauen, worked pretty well as a case of the week episode. It featured the whole team and was filled with humor, plus Deeks and Kensi even got the bulk of the action. I just wish all the parts added up to just a little more.

The Densi was lovely this week. The episode’s overall tone fell on the decidedly lighter side, starting right from the top with a delightfully silly Densi scene at the bar. I loved the reference to Callen as the “vagabond” living upstairs- a perfect description. Eric Christian Olsen and Daniela Ruah were great here as Deeks threw out some less than successful attempts at a name for the bar. And what did Kensi mean when she said “the name writes itself”? Sounds like she has her own ideas but isn’t willing to share. While I for one would be fine with Monty’s, I’d like to think they could come up with something a little more heartfelt. Granger’s perhaps? I bet you all have loads of good ideas! 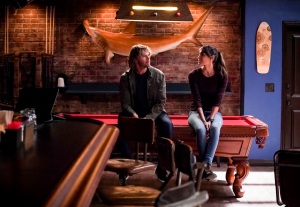 ECO/Deeks was again quite funny in the bullpen scene with Rogers as he told the team his analogy about Meru. If you haven’t seen Meru, by the way, go and download now- it’s an unbelievable story and a gripping documentary, as is the same filmmakers’ latest, Free Solo. I can’t recommend them both highly enough. But I digress. I laughed out loud when Deeks sauntered past Rogers on his way out the door, giving him quite the look. The whole thing was the height of silliness.

Deeks and Kensi were also pretty cute chasing down yet another apparently dumb as a rock bad guy. Don’t get me wrong, these clueless criminals are consistently entertaining, a sure source of laughs. Deeks yelled out so many funny lines to the people diving out of his way (“I gotta go save the world”, “Hey kids, don’t do drugs,” “It looks like he’s my friend- he’s not my friend!”) that it was hard to keep track. That combined with Kensi so matter-of-factly knocking the bad guy off his feet made for a fun chase. Deeks’ “Look Gregory, right there, a squirrel!” was a hilarious diversionary tactic. But my favorite line was probably Deeks telling Kensi, “I went down some steps. It was pretty awesome.” I’d love to know how many of these were scripted.

The final scene at the bar, in keeping with the rest of the episode, was also played for a few more laughs. The Blowhole, really Deeks? Really? It looks like the bar will be one more place the team can gather in their final scene each week. It’d be nice to see an occasional heart to heart here, but the classic team bonding fits right in as well.

What else could I choose to rant about than the darn box? I’m quite convinced the showrunners have no clue what’s in it, and that it was created by Shane Brennan simply to drive fans crazy. I was happy to put it behind us, but instead the box returned – or at least the topic of the box returned – in this week’s episode. It’s one thing to mistakenly build something up that you can’t back up, so you let it disappear. It’s another to bring it back six years later without any payoff. Who does that to fans? If this is part one of a two-part box unveiling, I’ll apologize. But if we don’t hear about the box again for another six years, I say this was just a new (old?) way to taunt fans. And why do you want to antagonize your most loyal viewers? I don’t get it.

The other part of my box rant is the idea that Deeks would have lost said box. We saw how seriously he took it when Kensi gave it to him, and again when he opened the outer box in “Three Hearts.” After all, it does contain the thing he wants most in the world. Playing its possible loss for laughs did not sit well with me. It felt totally out of character for Deeks and jarring in contrast to the gravity of those previous scenes.

The interesting plot this week held my attention even though it lacked much in the way of suspense. Person of interest Veronica Stephens (played by Dina Meyer) was intriguing even if she displayed the exact same facial expression and projected the same emotion the entire time. I wonder if she’ll become a recurring character. My biggest (only?) issue with the story was the final chase sequence. I would think the whole point of using Overwatch spray is so you can tail the bad guys from a distance. After all, you know where they are- you aren’t going to lose them. So why did Kensi and Deeks make their presence known and trigger a dangerous high speed chase? I guess because the showrunners wanted to blow something up (which was pretty fun after all). (Although that still doesn’t explain why Eric needed cameras to track the van when they lost it.)

The whole team was very much in character throughout. Sam and Callen bantered away (“It’s not always about you, G”) and gave Nell an enjoyably hard time about abandoning Eric to the attentions of Rogers. Deeks and Kensi seemed to be relaxed and fully enjoying themselves out in the field, almost like time had been turned back a few seasons. Eric was his nervous self under the watchful (and close) eyes of the Special Prosecutor. The episode felt well balanced and we got several scenes featuring the four leads all together, which have become such a rarity that I always try to savor them. Plus everyone had a few moments to shine in the many humorous scenes.

But that’s maybe also my problem with the episode. It was determined to be lighthearted and funny, which was fine as far as it went, and at least Jaffe did so without making Deeks the butt of any jokes, for which I’m genuinely thankful. But making Rogers (played by Peter Jacobson) into a silly character after he seemed to be the only one taking the loss of Hidoko seriously, while definitely entertaining, felt out of character. It left me a bit disoriented, as now I can’t tell where this storyline is headed. Is the team in real trouble or is Rogers going to be their new besty?

What did you think of “The Heist”? Did you enjoy the banter? How about the transformation of the Special Prosecutor? I’d ask for your ideas on names for the bar, but you might want to save them for a special poll that will run later this week. Tell us your thoughts in the Comments below!