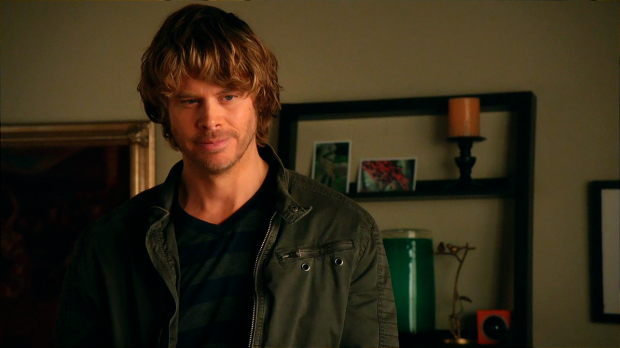 One of the many special skills Deeks brings to the team, one that no one else really has, is his ability to defuse tense situations with a few funny words. It’s not easy to do, for when people are stressed, they’re apt to react poorly to someone joking around. Yet Deeks consistently pulls it off. I see it as one of his defining characteristics precipitated by his tough childhood (discussed at length as part of the Bringing Up Brandel series). Today we’ll list the Top 3 examples where Deeks demonstrates this particular talent.

This one’s pretty simple. I allowed for instances where Deeks defuses humor for the team, for Kensi, or even just for himself.

I ended up with a Top 3 that had a little of everything, including what might be his all-time funniest line. In reverse order of importance, my Top 3 is…

#3. Worrying about getting pummeled by Viggo Mortensen in the bathhouse in “Wanted”

Deeks’ discomfort with his undercover assignment at the Russian bathhouse in “Wanted,” written by R. Scott Gemmill, is made quite clear when he expresses his fear of a naked Viggo Mortensen jumping out to “pummel” him. It might just be the funniest one-liner he’s ever uttered- it’s certainly on the short list. (It’s a reference to the movie Eastern Promises, in which Mortensen’s Russian mobster character fights off the real bad guys in a bathhouse while naked.) Chris O’Donnell’s brilliant direction of this scene just adds to Eric Christian Olsen’s performance. (According to the DVD commentary, he instructed the actors playing the Russians walking past Deeks to try to rub up against him.) This is an example of Deeks trying to distract himself by joking around, and it feels natural, utterly unforced except by Deeks’ nervousness. Plus it makes me laugh out loud every time.

#2. Joking about the LAPD plumbing getting backed up when meeting the team in “Hand-to-Hand”

This scene in the boatshed in “Hand-to-Hand” (written by Matt Pyken) where Deeks finally comes face to face with the whole team is a great one. I’ve long admired the way ECO holds his own against these famous actors with their established working relationships, just as Deeks holds his own with these seasoned federal agents. But his little joke about not working as close to the water except when the plumbing gets backed up was our first glimpse into his real personality. Prior to this, we had just seen the rather serious Jason Wyler. This first attempt to defuse humor makes the list not for its hilarity, but for how it gives us insight into his personality.

This is definitely the sweetest use of humor on my list. In a wonderful scene in “Blye, K.,” written by Joseph C. Wilson, Deeks shows up at Kensi’s apartment to try to find out why she’s become a murder suspect. But it becomes apparent that he’s also there to show his support. That he pre-planned this humorous moment shows us his thoughtfulness and his anxiety to make Kensi feel a little better about what’s happening. It’s downright romantic. His obvious pleasure at having succeeded in lightening the moment gives us a clear window into his motivations. His faith in Kensi, expressed earlier in the scene (“Not for a second” would he think she’d murdered someone) combined with his ability to make her laugh in such dire circumstances makes this scene one of the series’ sweetest.

I considered plenty of other great moments. Among them:

Next week we’ll continue on the general topic of humor as we tackle the Top 3 Funniest Scenes. In the meantime, what are your Top 3 Uses of Humor to Defuse Tension? Do you see it as a defining characteristic of Deeks? Tell us in the Comments below.

Or, return to the last Top 3, the Top 3 Most Wanted DVD Commentaries.