“You gotta admit it was pretty badass, huh?” Deeks offered up a quick smirk, quirk of the lips almost hiding his pain as he shifted in the wheelchair, glancing behind his back to the tall brunette escorting him through the hospital. “You know, when I saved your ass.”

Barely managing to hold back a “Shut up, Deeks” or even a quirk of the wheelchair to send him shifting, Kensi rolled her eyes, stopping the chair beside a large window in the nearly empty hallway, sinking down on the bench beside it.

“I’m not here to appease your pride, Deeks.”

“Just to check up on your dear partner,” he cocked his head, a blonde curl falling over his forehead, sunlight glinting off it.

This time she couldn’t hold back the “Shut up, Deeks,” anymore than he could control his following chuckle.

“I’ll be back soon, they can’t hold me in here too long.”

“I knew you cared,” he passed back, another line of fire in their now normal bickering games, though now an easy silence fell over them as he stared out the window, a deeper haze to his blue eyes that truly did concern, and God, a part of her didn’t want to deny that fear, he was her partner, was the one she trusted with her life, the only one she completely trusted with her life, because the man who charged out of a hospital to save her with bullet wounds in his chest earned that privilege, the man who pulled her from the lasers earned that privilege, and she found herself beginning to willingly give it up.

Because this was the man who threw a temper tantrum over a hangnail, insisting that he was dying, who couldn’t stop whining when he got a cold, but wouldn’t utter a single self pitying word when blood was oozing from wounds that tore open during his act of bravery.

Maybe because he blamed himself for the incident just as much she blamed herself, his guilt killing him over his laziness, that she was almost harmed over it, that he was the easily accessible, the weak link, and hers, hers over him actually getting harmed, over the bullets that landed in his chest because of her, to get to her, because somehow they knew she’d stay by his side, partners.

Weaknesses landed them here, in this hospital, newly learned strengths could place them both back in the field.

“I can help, pre prep you for Sam’s lessons if you want, I may have taken them myself a while back,” she stumbled, words awkward, yet completely appropriate, partners after all, she’d have his back before it even needed to be guarded.

And the smile that touched his lips lacked any of his usual arrogance, and his quiet thanks held just a bit of the same hesitation she showed.

Maybe they weren’t so different after all.

Thanks Divergent338 for writing this wonderful story to bring to life some of the topics in Bringing Up Brandel Part 5: A Little Delicate. – Karen P. 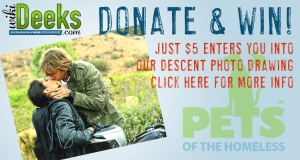 3 Comments on NCISLA FanFic: Just a Little Bit of the Same